Remember the moon survives,
draws herself out crescent-thin,
a curved woman. Untouchable,
she bends around the shadow
that pushes himself against her, and she

waits. Remember how you waited
when the nights bled their darkness out
like ink, to blacken the days beyond,
to blind morning’s one eye.
This is how you learned to draw
your life out like the moon,
curled like a fetus around the

shadow. Curled in your bed,
the little hopeful flowers of your knees
pressed against the wall,
its mockery of paint,
always the little-girl colors
on the stones of the ordinary prison:
the house where you are someone’s
daughter, sister, someone’s flesh, someone’s

blood. The Lamb and Mary
have left you to float in this darkness
like a soup bone. You watch
the cannibal feast from a hidden place
and pray to be rid of your offering.
The sun is all you wait for,
the light, guardian saint of all the children
who lie like death on the wake

of the household crime. You stop
your heart like a clock: these hours
are not your own. You hide
your life away, the lucky coin
tucked quickly in the shoe
from the burglar, when he

comes. Because he will, as sure
as shoes. This is the one
with all the keys to where you live,
the one you can’t escape, and while
your heart is stopped, he takes things.
It will take you years

to learn: why you held back sleep
from the mouth that opened in the dark;
why you would not feed it with
the dreams you sealed up tight
in a cave of tears; why
the black widow still visits you,
squeezes her venom out in droplets,
stringing them like garnets
down your abdomen,
the terrifying jewelry of a woman
you wore inside, a child robbed

in the dark. Finally you know this.
You have sliced your numbness open
with the blades of your own eyes.
From your years of watching
you have grown the pupils of a cat, to see

whole. You take in silver
through your eyes, and hammer it
as taut as poems in steel
into the fine bright crescent of your life:
the sickle,
the fetus,
the surviving moon. 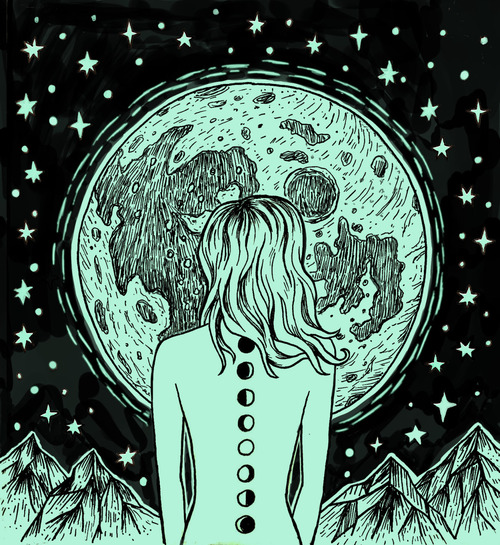 Below, you will find a creative response to Barbar Kingsolver’s “Remeber the Moon Survives.” Similar to the poem itself, my response focusses on the topic of abuse. Both pieces also explore an individual’s capability of persevering through dark periods during her life, and how this darkness does not define but makes her resilient instead. This story is broken up into three sections:

phase one: the waning

phase two: hardly there at all

Each section pertains to different phases of the moon, the moon also a being a prevalent image in the poem. The first two phases mentioned in my response–the waxing crescent and the new moon–correlate to the darkness the protagonist of the story faces in her life. The last phase mentioned (the waxing crescent) relates to her ability to overcome this darkness and find her own light.

phase one: the waning

It’s 3:00 in the morning, and He still hasn’t come home yet. This worries me. Not because i’m afraid He’s gotten into a fight or is lying dead in a ditch somewhere. No. That’s not why i’m worried.

And then i hear it, the front door creaking open. He staggers down the hall and stumbles His way into the room. My back is to Him. i close my eyes and pretend to be asleep. If i am awake, i am a target. Because there’s no use hitting a sleeping girl, is there? Because then you don’t have the satisfaction of listening to her scream as you beat her.

He’s on the bed now. i can feel Him hovering over me, can feel His breath on the back of my neck and how it seems to sting my skin. He reeks of liquor and sweat. With cold fingers, He brushes a loose strand of hair behind my ear. i clench my jaw in disgust. With a snicker, he kisses the side of my head before turning away from me.

i don’t move until i can hear Him snoring, and it is only then that i open my eyes. i catch a glimpse of the moon outside the window. A waning gibbous.

i stare up at the ceiling with swollen, defeated eyes. My heart beats heavily in my chest, and my body aches. It is a familiar ache.

He came home earlier than usual last night. Around ten o’clock,  i decided to take a shower because i thought i was safe; i didn’t think i would be seeing Him for hours. When i got out, i remember being startled by how dark the room was. i looked towards the window. A new moon had settled in the sky. You could barely make out its light from the way the opaqueness enveloped it.

i didn’t see Him at first, standing there in the corner of the room with—now that i think about it— what i imagine to be a sadistic grin on His face. He had shoved me forwards and then He started yelling at me. Something about almost slipping because i’d forgotten to leave the porch lights on. i was about to protest, but before i could say anything, He had removed His belt from around His waist. i tried my best to use my hands to shield my body, preparing myself for the anticipated blow. But i was no match for his anger.

And He was angry, angrier than usual. i tried to distract myself from the gruelling bite of the leather by looking out towards the moon, trying to seek comfort in the slim crescent of light peeping in through my window. The light that hardly seemed to be there at all…

He was cursing at me, His mouth a gun and His words the fatal shot. And i guess He had been feeling generous because He kept at it, kept striking until my eyes rolled into the back of my head. At some point, i must have passed out from the pain. It’s morning now, and i’ve just woken up. Morning means i am safe again, because He has probably gone in to work. Or back to the bar… i’m not sure which.

With a yelp, i pull myself up to a standing position and walk towards the mirror on the wall. i inspect the raw skin on my stomach, back, and thighs. i don’t think i’ve ever hated myself so much. And all i can think about is what a sorry state i’m in.

And maybe I’m tired of being sorry.

I’ve finally got him. It took a while—took another two black eyes and some bruised ribs to be exact—before I did what I should have done a long time ago.

It was the first time I’d ever seem him powerless. I will always remember the way They dragged him off, cuffed and dejected. I watched him as the cop car drove off, the way the red and blue light illuminated his features. The features that, for the first time, didn’t seem so scary.

he won’t be able to prowl in the shadows, not anymore. Light will no longer be his prey but rather his conquerer.

I am the conquerer.

I am the light that lives beneath the blackness, the light that wanes only so it can wax. I am the crescent that eventually gives into fullness. I am resilience.

I am the Moon.

And the Moon always survives the darkness.

I also thought I would share my emulation of “Remember the Moon Survives” since it was also a great source of inspiration for this personal response. 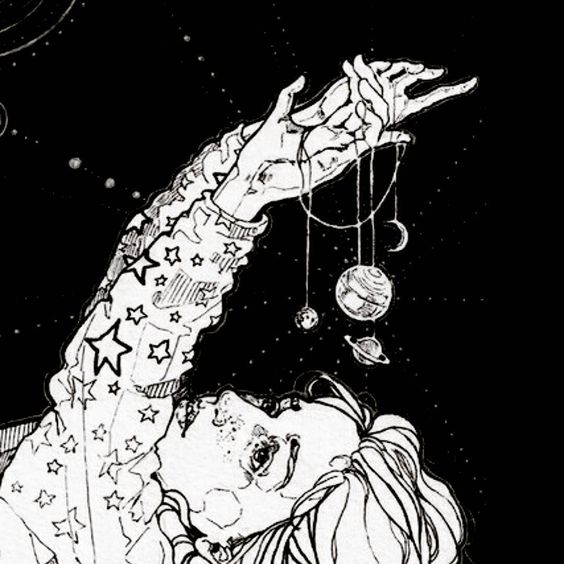 and the waning of light that comes before it,

from a slim crescent to

almost nothing at all.

the shadows that creep in through your window,

the shadows that slink across the floorboard

and cascade over you

Remember that darkness is

a Hunter and that

light is his prey–

something that needs to be snuffed out.

And that is why new moons

because the universe has always

even during Hunting Season,

even when there he has a gun pressed to your head,

and the light that always comes after it,

how it transforms from almost-nothing

You musn’t forget this, my darling.

You musn’t forget how the moon survives.