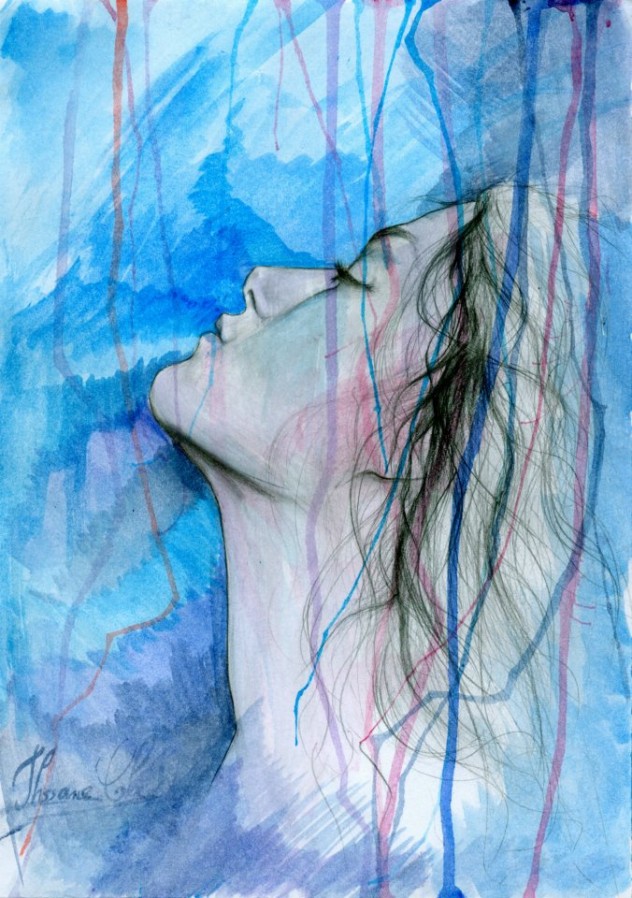 She held her breath in a room full of air.

She was determined to prove

she could control her body,

because she was afraid to be a slave 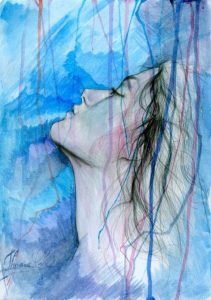 to the flesh and bone construct

that was created to contain

the core of her being,

so instead she tried

to prove her power over her person.

as labels she could ascribe to her fears,

as things she could be

so she would know what to get away from.

She became ‘freakish’ and ‘blemished’,

in her anguish she disowned

the clay in her bones,

she turned her back on the body

built from soil in the beds

of her ancestors’ fingernails.

She was trying desperately

to break the boundaries of her being

and bind her blemishes in bandages,

and to live up to

the tangible qualities of beauty.

She broke the body she was built to bear.

And you wonder why

she held her breath in a room full of air; 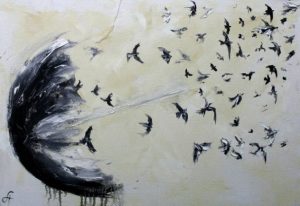 maybe it was because she couldn’t stand

as they tried to French-braid themselves

into an excuse for being less than beautiful;

maybe it was because the cavern of her chest

wept with the echoes of a bleeding beat

as her friend talked to her

about how pretty she could be

if she just tried a little harder.

As if she wasn’t already

to change her frame

to dress up her skeleton

but under every bit of prettiness

they said she could hide beneath

to the trail of her truth.

Her body wouldn’t change beneath

her own fists curved into wrecking balls

the blueprint of her body,

into bones that wouldn’t change shape

to become a receptacle

to her fear of how she should appear.

The faith of her body to itself

became the bane of her bullied beauty.

It goes beyond skin, you see,

she held her breath in a room full of air

to try and prove

she could control the vessel

her spirit was born into

because she had to try

and beat it into submission somehow.

But eventually her lungs stopped listening to her

when they felt her fingertips going numb

in the wake of her desire to be beautiful

becoming stronger than her desire to be alive.

Her blood began to riot,

it disobeyed her tormented desires

because it kept carrying oxygen

to every part of her she wished

she could cut off, and so

she held her breath in a room full of air.

At night, before bed,

before her body would curl in sleep –

she didn’t check the closet

or underneath the bed skirt

for the repulsive faces of monsters,

she checked the mirror!

And she held her breath in a room full of air.

This poem explores self-image and describes the destruction that comes from aspiring to a standard of beauty that shouldn’t apply as such a painful expectation; everyone is already beautiful in a way that no one else will ever be able to achieve. As most girls (and boys) struggle with their body image at some point in their lives, I think that this is an issue of the utmost importance, one that the world hears but doesn’t listen to. Millions speak out about how the impossibility of modern day beauty can quickly become sinister, and yet magazines continue to publish photo-shop fake models on their airbrushed pages; people who are physically attractive are still more likely to be hired for jobs; the music and film industries still select only the most beautiful to showcase in front of the world, as if to say that if people aren’t that perfect, then they aren’t worth taking notice of. Somehow, we never fail to dismiss body image as a social issue.

It is not something that can just be dismissed. Self-esteem issues can’t be wished away or forgotten. There are people who are crying and people who are dying and people who are dead, all because they couldn’t reconcile their beauty with the beauty that they are told they should be. We are being taught to believe that to be beautiful is to be everything, and that to be any less than “perfect curves and symmetrical lines” is to be nothing. This is false, and this is poison to the minds of people everywhere who begin to believe that they aren’t worth anything, when in fact, they are their very own brand of beauty.

The girl in this poem represents all of us who have ever felt inadequate because of how we look, and her urge to hold her breath in a room full of air is symbolic of the self-inflicted torture that we let ourselves succumb to when we say that we aren’t good enough, and when we try in vain to become something that we are not.

So believe that you are beautiful. Don’t try to control your body – embrace your body. Be you, and breathe.

This poem was inspired by a line in R.M. Drake’s poem Next Time.

6 thoughts on “Holding Breath in a Room Full of Air”