The following is a Personal Response inspired by Italo Calvino’s short story  “The Distance of the Moon”. All characters are of his creation and as such, credit pertaining to them goes to him.

Though she has long since forgotten the sight or touch of all that was green, the Woman of the Moon can still hear the Earth calling out to 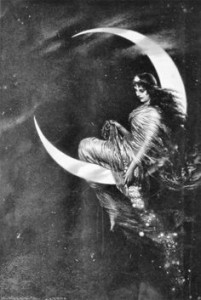 her. She can’t remember the sound of her name or the sight of her own reflection, but she can hear ever roll and pitch in the chorus of voices that seemed to reverberate in her bones as they howl out into space. It is a pathetic sound; it has a tendency to haunt as it looms throughout the atmosphere and yet no matter how hard she tries to bloke it out, she fails. The endless dogging of misery is what has sent her here, in hopes of some escape, and yet even here she recognizes the sound of its putrid panting.

In response to this she plucks arpeggios out of her harp. The sound calms her and takes her back in time. She closes her eyes, and suddenly silhouettes are conjured. There are cliffs in her memory, running with jagged consistency in the backdrop. There is a Ladder that acts as a cathedral; it connects the heavens to the Earth one rung at a time. Slowly, a hymn of creaking wood and scuffling feet begins, and the Woman of the Moon panes the scope of her dream world down to see what has caused the sound. It is then that she sees him.

Though everything else in her mind has receded to shadow, she can still recall every inch of him. The curve of his jaw, the cut of his build, the dreamy absence in his eyes, and the grace in his feet; she knows it all. She would know him, dreaming or waking, life or death, Moon or Earth for he seems to be the answer to the questions the universe was built upon. He climbs up to her, back to the Moon and all that could have bee. Her heart is soaring. Soon so is he as he leaps from the last bar and spreads his arms as he floats down before her. The Deaf One has returned to the Moon with the same easy grace he left it with.

She cannot help herself. She lunges forward, arms stretching out to capture him, and still he evades her. The Woman of the Moon opens her eyes and all that greets her is an empty space where love used to be.

When she left the Earth behind, she had defiance. It curled hot and heavy in her stomach, mingling with lust for she knew that above all else, the Deaf One looked upon the Moon with wonder. So if she lay herself down within the Lunar Soil, she too would be subject to his gaze. The thought had satisfied her and kept her warm throughout the cycles at first, but then came the wailing.

As the Moon drifted farther and farther from Earth, the cries from the planet grew louder and louder, almost as if by the distance of the void in between magnified the connection that had been lost. She knew they did not cry for her, and yet she could not help but wish they did for then she and the Moon would truly be one in the same. Only then would she be able to feel the caress of the Deaf One, even if it was just his eyes gazing up into the night sky. As the cycles had come and gone throughout eternity, she had come to feel grime build around her. Something had been soiled, and the great crescendos from Earth cut her to the bone with mocking. Throughout history, ballads have been sung to the Moon; her face is sketched into history with craned necks and inky fingers. But these songs of lust and longing, they are not for her. She is merely eavesdropping on a great love affair of axis, tilt, and time.

The Deaf One’s passion has never died over eternity. She can hear his voice calling out, though it is distinctly different from the others. While others bawl over what they cannot have, he sings lullabies of satisfaction for the Moon to simply be. He cannot hear his own tune and yet he is content in knowing the Moon can. It threatens to drive her mad with longing.

She pulls a few more chords from the harp, but they cannot seem to overthrow the sound. She cannot weep, for she fears water will push 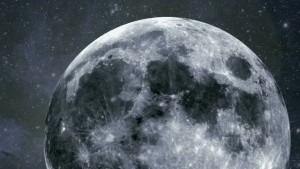 the moon farther from Earth, just as the tides did so long ago, and the voices will get louder, as they always do, hurling through space to pierce her eardrums. Despite it all, she cannot pull away, because then she will lose whatever flimsy, stolen connection she still has with the Deaf One. Misery is better company than oblivion, so she drowns herself in it, listening to his gentle voice among a sea of mourning. It is all she can do, knowing that attempting to not listen is futile and that even if she could, she wouldn’t. His voice is all she has of him now so she keeps it close, allowing it to sheath itself in her heart. In this ache she at least feels something; a cathartic spearing at the hands of eternity with her stolen romance and ancient memories. The Moon spins on, the cries carry out, and the Woman of the Moon takes what little she can into the looming dark of infinity.