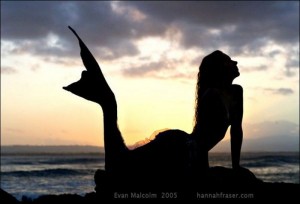 My grandmother always told me that if I was quiet enough at night, I would hear mermaids singing out on the rocks in the bay. As she sat in her chair, rocking in rhythm with what I was sure was the tide, she’d beckon for me to sit on the footstool beside her and she’d whisper the same stories her grandmother had told her when she was a girl.

Up until I was eighteen, I spent every summer with my grandmother. I’d leave my parents behind the mountains in favour of the British Columbian coast. They were not always eager to let me go, but I always went anyway. The tradition of spending my summers this way had etched itself into my bones in such a way that to not go would be to fight against every fibre of my being. There was a kind of calm to that sleepy house that melted all the stress in my life away the moment I stepped through the front door. All the anxieties I had about school and my future were simply washed away to the back corners of my mind where I would not have to touch them again until fall. Instead, my mind could lose itself in the wonder of my summer world.

At the centre of it all was my grandmother. She was by no means a soft woman, but there was something about her that always managed to make me feel at home. Something about her voice, the way it bubbled as clear and cool as a mountain spring, that lulled itself inside me, until the stories she spoke became the center of who I was as a person. Some people live in a world where numbers and formulas define the chaos of the universe, but for my grandmother and me everything could be explained through stories of sirens and spirit bears.
My life became a world spun of the sailor lore passed down through the family. My grandmother had learned it her grandmother who had learned from her husband; a man who knew the stories of the sea as well as the callouses of his hands. Of course, my grandmother told me, he always told his wife a watered-down version. He was a lenient man in many ways she said, but harshness on a lady’s ears was something he would not stand for. As my grandmother told me this, she’d almost laugh, lean back in her chair, take a long draw from her pipe, and say she wish she’d been told the original version of the story. She said there was something to be taken harshness and vulgarity; that it built armour for the mind and thickness for the skin. And that taking such things as offence was a matter of perspective. I never truly understood what she meant at the time. I think she understand I couldn’t quite grasp the concept, because after she said it there would be a pause, an exhale of smoke from her thin lips, and she would just know it was time to tell another story.

The favourite for both herself and I were the ones about mermaids. And not just the pretty ones with long blonde hair and purple tails, oh no. My grandmother was many things but she was never mundane. In her stories, mermaids were creatures to be reckoned with. Their teeth were sharp, they had tails like sharks, and should they get the chance, they would drown you. Despite all this, she warned me, they were the loveliest creatures on God’s green earth. And it was the loveliness more than anything else that made them deadly. You would become so entranced you would not recognize that they were luring you out into the waves to drown you.

The last summer I spent with my grandmother I must have heard her stories of mermaids a thousand times over. The story was always the same and yet it never failed to pull me in with all the comfort of a hug from an old friend. That story told through the voice an old woman became my safe space. It transported me from a world where I was not ready to face the future and instead whispered promises of a land without suffering. I had been the kind of person people characterized as a dreamer; so, I dreamt myself a world without adulthood or independence. I wanted a space where I only had to be a child kneeling by my grandmother and listening to her speak of a world far more interesting than the mundane. It was a space which gave me exactly what I asked, and more. It was as life-giving to me as the waters of a mother’s womb. So life giving, that I was certain that without my grandmother providing escape to me, I would perish in this world that I could never seem to understand and never seemed to understand me.

Perhaps it was because of my certainty that life decided to test me. Two weeks before the summer of my nineteenth year my grandmother’s time on this world ended. Though she had never been a sailor, she went out with the tide anyway.

For the first time in my life, I was without an anchor. I had lost the only form of escape I had ever known. I was shipwrecked. Marooned. Nothing more than a lifeboat left adrift in doldrums. It was as though every horrible sort of fate a sailor could have had been cast upon me.

And here I was, left to face it all alone.

To say I didn’t know how to cope would be to put it mildly. The first two weeks of summer I felt lifeless, as though I no longer knew who I was or where I belonged in the world. I stayed inside and talked to no one. And finally, in the end, I could not deny the calling of the mermaids or my bones any longer. I bought a bus ticket, packed my bags and headed for my summer home.

It was not the same as it had been when I had last left it. There was an anxiety to the air now. Something had polluted its purity. All of culture’s worries and sickness must have clung to my skin and followed me here, and without the magic of my grandmother there was nothing left to keep them at bay. I remember collapsing to my knees in despair.

I must have sent a ripple of force through the room because at that moment my grandmother’s pipe, previously invisible to my eyes, clattered to the floor, and with the noise breaking a silence so pregnant it gave birth to a universal truth, I felt my grandmother’s final act of kindness. In that moment, I remembered not just what she had to say about the realm of the imagination, but on reality as well. How harshness and cruelty were simply matters of perspective. That was when it hit me of how much of a mermaid I had made my grandmother out to be. I had taken her words and drunk them so deeply that I had been suffering of asphyxiation and did not even realize it. She had seen me drowning, done her best to save me, and then once she realized I did not want to be pulled to shore, she had thrown me one last life vest so I could swim myself to shore when the time finally came. In doing so, my grandmother worked her magic one last time.

That night, as I lay in my old room, I opened the bedroom window, swung it wide open. One of the last stories my grandmother had told me before she passed was that when a sailor returns home after a trip at sea, he should open his bedroom window because it allows good luck to grace him as he’s sleeping. As for myself, I had no desire to gain any sort of luck, good or bad. What I did want was to see if I could hear mermaids singing on the rocks by the bay and if their songs would tempt me. As I lay there, I swore I heard the faintest of whispers calling out to me. Promising me stories I could drown myself in until I was so deep in dream that I myself would practically be a fairy-tale. Instead, I closed my eyes and pulled my bedsheets up around me, promising myself that when the sun rose tomorrow, I would come into reality as the tide came in.