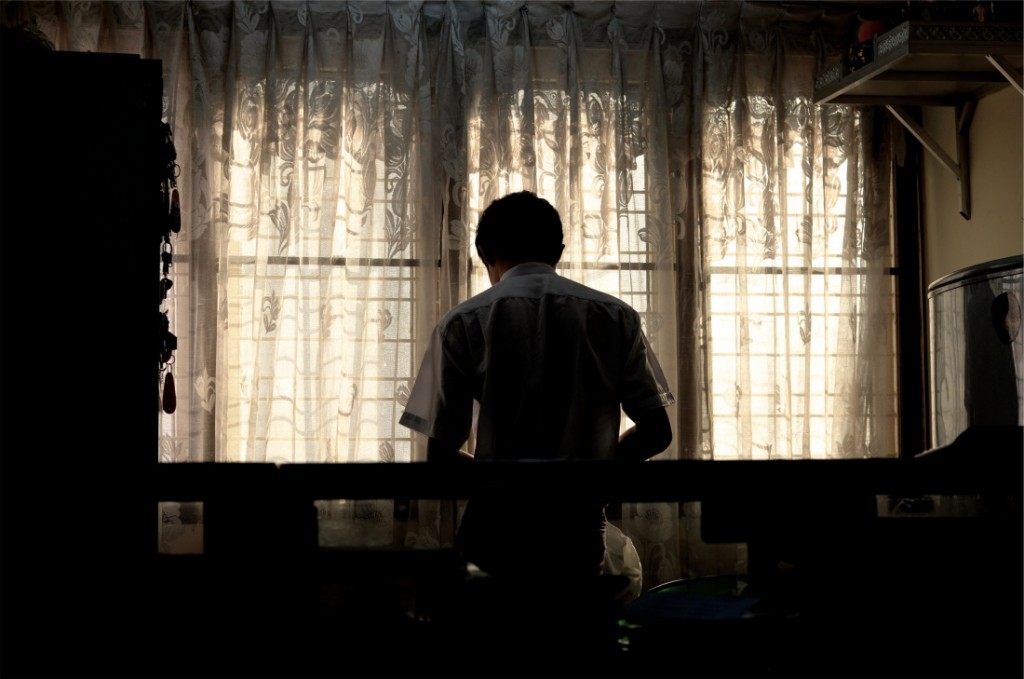 He didn’t realize when it happened— maybe after he lost it at his mother’s funeral because someone was talking bad about his favourite band.

He never got invited to another funeral again.

Or maybe it happened on his wedding day a few weeks later, when the priest asked if him he agreed to the vows, and he said “I don’t.” The sharp intake and sudden loss of breath in the Church that day told him wanting to not stay with her, no matter how perfect she seemed, until death do them apart, was not the right answer. He was just being honest.

That was, probably, when it happened. When the neighbours started to get antsy and decided there was something not okay about him, when the neighbours’ neighbours decided that too. When all the cute little neighbourhood children were not so cute anymore, and told their friends his house was a house filled with ghosts and witches and spiders.

So he sat in his house, in the light of a lamp that said no bad about him. It supported him with the light he needed to write and work. He appreciated his multiple lamps for that. Then, he closed his curtains and his windows because that was what made the neighbours comfortable and he knew that. If he did what they wanted him to do, maybe they’d once again knock three times and bring him a basket of baked goods, at which he’d smile gratefully, and gesture for them to kindly come in some for tea. Maybe they’d chat a little about the weather or maybe they’d chat a little about how ridiculous it was that children were scared of him, especially considering that he used to work as a clown at the bi-annual community carnival.

But they never did. Instead, he watched as the neighbours one day packed their sons’ things into his car. He was leaving for college. He watched through his curtains as the three hugged and kissed, reluctancy written all over. There were tears and there were laughs. He watched as he finally got into the car, waving at them almost as eagerly as his parents waved at him. Then he watched as the two hugged each other, holding on. There were tears that were graciously wiped, and they went back inside.

But this was what he desired. All his life he had wished to pursue writing about new and different experiences than anyone else had ever had. This was his chance! He leapt up in delight and grabbed some paper. He took out a pen and mustered a smile. This state of no distraction, of nothing to do but to read and write was truly ideal. He could become one of those authors that maniacally wrote masterpieces; he was already isolated from the world. He touched his pen to paper. He tapped his pen on his head. He swiveled around and around in his chair because no one could tell him to stop for he would get too dizzy. And quickly he stood up, only to be thrown off by his own imbalance and fall down hard on his tailbone. It was a new experience! He would write about this.

But the sun’s colours were dark shades now, illuminating the shadows of his dusty house more than making them shine. This upset him, so he went in search of a lamp. It was getting darker so fast. He furrowed his brows in concentration and held out his arms in front of him. It was simple: he’d go to the first room he saw, turn on the light, find a lamp, and quickly go back to the living room. Truth was, he liked to stay in the living room with its big windows that let the sunlight shine through and touch him. It was a motherly touch: welcoming, soft, and bright. His heart fluttered. That was something he missed.

Aha! His fingers grasped at the light switch and flipped it on. He blinked a few times to get his eyes to adjust. It was a washroom. With a gasp, he shook his hand wildly. A spiderweb had attached itself to his hand. He rushed forward to turn on the tap and wash it off, but the metallic, rusty smell coming from it made him decide otherwise. Instead, he wiped it off on his pants. They were in need of a wash anyways. Suddenly, he was overcome with acute nostalgia. His then fiancé had insisted this washroom have a giant mirror. He had grinned at her wild waving of the arms to show what would go where and he had pulled her in for a hug, promising whatever she wanted would of course, happen.

Now, he saw that past in the mirror, and he saw the present of him. He looked dirty and old. When was the last time he had shaved? His clothes were faded and stained. It seemed odd that flies were not already flying around him. Against the dusty new washroom he stood out; shining in his filth and misery. He really didn’t like the dark circles beneath his eyes.

That was a new experience! Perhaps he would write about that.