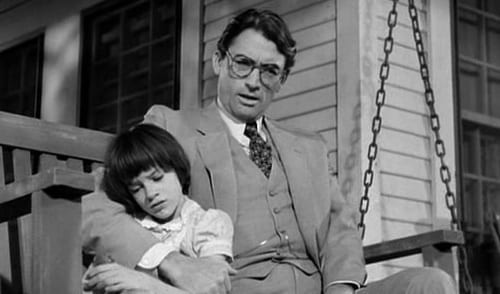 Prompt: Discuss the idea(s) developed by the text creator in your chosen text about the role adversity plays in shaping an individual’s identity.​

Adversity is something we all face in one way or another. It is thought of as pure misfortune, something that strangles and drowns us in pools of despair. Often people deal with adversity by playing the victim, only acknowledging the negatives and seeking empathy. However, what they fail to recognize is the valuable impact that adversity had in their lives. A similar concept is introduced in To Kill a Mockingbird, where many characters undergo adversity and we, as readers, identify its importance in their lives and overall character development; for example, the Tom Robinson trial was unjust and traumatizing, but it opened the eyes of Jem and Scout to racism in society and taught them to treat everyone equally. Through the character of Scout, Harper Lee expresses the idea that when an individual faces adversity, they are offered a challenge to overcome, and in order to overcome this challenge they must open their mind to new ideas and morals, which shape their identity and character for the better as they mature. By enduring different forms of adversity, Scout is able to shape her identity in terms of compassion for others, control over her actions, and awareness of the prejudice in her society.

One of Scout’s first encounters with adversity occurs when she begins her education. On the first day of school, she experiences conflicts with her new teacher, Miss Caroline, who scolds her for being academically advanced in her ability to read and write. After her dispute with Miss. Caroline, Scout reflects on the situation, “Until I feared I would lose it, I never loved to read. One does not love breathing” ( Chp.2, Pg.24). Scout realizes that she has a love for reading, but she also realizes that she has never loved reading before she was threatened to be robbed of it. She then compares reading to breathing, most likely because reading came as easy to her as breathing did. When she tries to figure out how she learned to read, she reminisces about climbing into Atticus’s lap when he was reading at night. Even though Atticus continues to read to her, Miss. Caroline’s threats alone are enough for Scout to become aware of what she takes for granted, like reading and breathing as mentioned. She learns to appreciate what she has, as it is a privilege for her to have it and it can be taken away at any time. Scout is also deeply affected by Miss. Caroline’s remarks about her father teaching her incorrectly, and being shamed like this is definitely a form of adversity for any young girl. After talking to Atticus about this challenge, however, Scout learns to consider Miss Caroline’s point of view. Miss. Caroline must be strict about her students’ learning as Maycomb’s education system is very rigid, but this does not define Miss. Caroline as a “bad” person. Later on, she continues to disagree with Miss. Caroline but her consideration of Miss. Caroline’s perspective prevents her from starting another argument and possibly having her feelings hurt even more. She makes it a habit to consider other people’s perspectives and demonstrates this many times after the incident, for example, with Burris Ewell, Walter Cunningham, Mrs. Dubose, and Boo Radley. This lesson shapes her identity into becoming a more fair and compassionate person over the span of the novel.

When facing adversity, individuals must go through the process of learning how to deal with the challenges that they are presented with; this aids them in growing into a more mature person. In the novel, Atticus takes on Tom Robinson’s case, and the criticism that Scout receives for this proves to be a challenge for her to deal with. One day at school, a boy named Cecil Jacobs makes a racist insult about Atticus defending Tom Robinson, so naturally, Scout loses her cool and beats him up. When Atticus finds out about this, he is very disappointed and gives Scout some advice: “You just hold your head high and keep those fists down. No matter what anybody says to you, don’t you let ’em get your goat. Try fightin’ with your head for a change” (Chp.9, Pg.84). Since Atticus had warned Jem and Scout about the hatred that would accompany him fighting for a black man, he is very upset that Scout still let her emotions take over. He tells Scout to let her head deal with the conflict rather than her fists; in other words, he says that violence should never be the first course of action. Although she does beat up Cousin Francis for the same reason later, she gradually catches on to what Atticus is trying to teach her. The next time Cecil Jacobs insults her father, Scout walks away from the fight with incredible self control. Although this is very difficult for her during that moment, Scout learns to keep her cool in the face of adversity, breaking away from her usual anger fuelled mindset, which is a deep inner development for her as a character. This is less a change in her behavior, and more a change in her identity – her attitude and personality. Overcoming the urge to fight anyone who criticizes her is a major shift in her identity as her viewpoints and beliefs have changed for the better.

Individuals must go through adversity to prevent further challenges that innocent and marginalized people, who will most likely get undeserved consequences, may face. By experiencing adversity in her childhood, Scout’s perspective and identity has shifted to prevent further losses. When Scout and Jem are heading back from the carnival late at night, they are suddenly attacked by Bob Ewell, though they do not know who their attacker was at the time. Sometime after they arrive back home, they discover that Bob Ewell attacked them and died after being stabbed. They realize that Boo Radley saved them and accidentally killed Bob Ewell in the act of defending them. Heck Tate and Atticus decide to call his death an accident by saying he “fell on his own knife.” When Atticus asks Scout what she thinks about putting Boo on trial, she says, “Well it would be like shootin’ a mockingbird, wouldn’t it?” (Chp.31, Pg.291) Atticus believes in morality and reason, which is why he makes sure that Scout understands their decision. Her reply references back to Atticus’s statement about it being a sin to kill a mockingbird. By going through the adversity of Tom Robinson’s trial, Scout realizes that both Tom Robinson and Boo Radley are mockingbirds. Since she has already witnessed the murder of one mockingbird – Tom Robinson – she does not want this adversity to repeat with Boo Radley. Most children believe that any form of lying is bad regardless of the motive behind it, however, Scout understands it is okay to lie to prevent an innocent person from unjust consequences. She also discovers the deeper, more important, rights and wrongs of society, beyond lies. She would not have understood these ideas if she had not witnessed prejudice in her society. Although it was painful to witness at the time, the adversity transformed her into a greater, more just individual.

Scout’s challenging conversations and experiences prove to benefit her in the end, when she overcomes these challenges and understands so many deeper issues that are prevalent in her society. Through Scout, Harper Lee conveys the importance of adversity and how it moulds an individual’s identity into the best version it can be. She explores adversity through the eyes of an innocent child who welcomes new knowledge and morals to become a mature young woman. This concept can also be applied to society today in many ways. If we use Scout as an example, we can learn to embrace challenges and to open our minds similar to how a child does. By learning from adversity instead of being buried under the memories of it, we can evolve our identities and better ourselves for the betterment of the entire society.