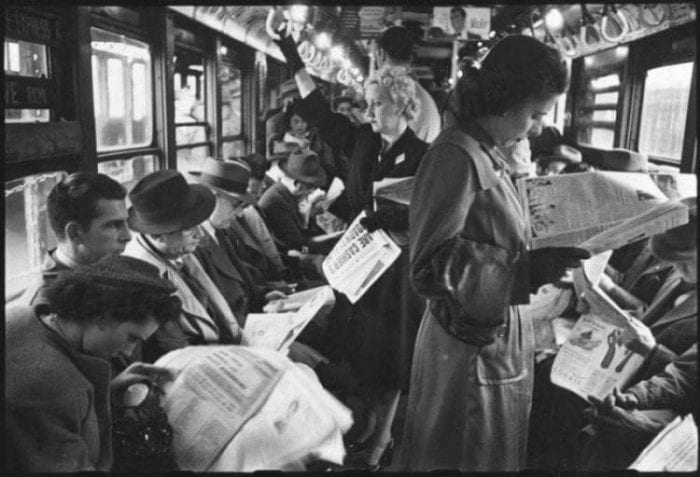 Side note: This is the first short story I’ve ever written, so please don’t judge me too hard.

It was Thursday evening and Mr. Hughes had just left work. He was quite a frail man, always wearing a suit and tie with his hair slicked back. The sky was a pale shade of grey, misty fog all around the mountainside, which was a little unusual for a typical summer night. Although Hughes was running late, he made sure to grab a copy of the paper on the way to board the Sedona Express. He entered just in time, the doors closing right behind him, when he spotted Mr. Martinez and Mr. Chapman, his companions from the office. He quickly caught his breath, and headed over as they had saved a seat for him. They ardently greeted each other before Hughes set down his briefcase and had a seat. Martinez, a man who was known for his personal attractiveness, offered him a cigar and he politely accepted, “Thank you.”

The train left the station, and as per usual, the men began to read the paper. The silence around them soon became a quiet pattering of raindrops against the tinted glass windows of the train. Chapman read the headline aloud: The Genius Behind the Stock Market Crash. He began to read the article out loud with what seemed like fascination, but more so mockery: “A few months earlier, there was a huge stock market crash, a total collapse of the economy. It was very sudden, completely unexpected since the economy was doing great just weeks before…. From a recent police investigation, it was found that this stock market crash was actually created by one individual, now labelled “the stock market genius”. By attempting to track this person’s identity, the police came across some hospital records by the surname of Abram. They also discovered that this man was missing a limb-.”

At this, Martinez and Chapman burst out laughing; Hughes laughed along although he did not catch on to what he was laughing about. “They think a handicap could have the brains for this,” Martinez said with disbelief.

Hughes understood now and forced on a laugh. He asked, “But if he really did do it, don’t you think he would be caught by now?”

“He’s probably hiding out in the outskirts of Africa right now,” Chapman said.

At this they chuckled again. Hughes saw the amusement in his friends’ faces and continued, “No, I bet he went up to the snowy forests in Canada!”

Finally, Martinez concluded, “He probably killed himself already. There’s not a single handicap here in Sedona anyway. And who would even want the reputation of being disabled?” The three of them stifled their laughter as it was unconventional for businessmen to behave that way in public.

The train arrived at the next station, which was Hughes’ stop. He gathered his belongings and bade farewell to his friends. As he exited the train, they called out with a smile, “Don’t be late tomorrow.” It was now pouring outside, the puddles rippling outward with every drop of rain. The sky was penetrated with eerie clouds, and deafening booms of thunder echoed in the distance. Hughes wished he had brought his trench coat or at least an umbrella, but he was almost home anyway. It was close to seven o’clock when Hughes arrived at his home. His mansion stood proudly behind iron gates, surrounded by rows of dense trees crowned with mossy leaves, swaying gently to the stormy winds. In the center of his courtyard, there was a grand fountain, mildly gurgling due to the overflow of water. Only a businessman had the money and the power to afford such a lavish lifestyle — even in the times of this economic crisis.

After his usual evening routine, Hughes started preparing for a restful night. He changed into his nightly attire, climbed into his bed, and reached for his warm comforter. Once he was under the security of his comforter, he carefully reached down and removed his prosthetic leg, placing it beside his pillow. It was the first of its kind and he had created it himself. Sometimes it’s realistic appearance almost scared him. He laid with a grin on his face, feeling proud about his great disguise. Not a single person he knew of suspected him. Even Martinez said that no one in Sedona was missing a limb.

He switched off his lamp, however, his eyes remained wide open. Even after this great success, there was one thing that bothered him. There was one question he did not know the answer to, and in fact, it would remain unanswered for decades: Why was there so much prejudice against minorities? This single question robbed him of his only happiness. It melted away his smile, revealing a sullen expression and empty eyes. Every time he closed his eyes, all he saw and heard were Martinez and Chapman mocking the minority, mocking the handicapped, mocking him.