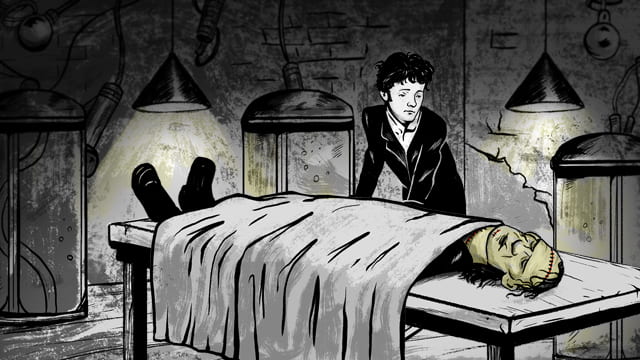 Throughout the novel Frankenstein by Mary Shelley, there is a major juxtaposition between nature and science present. Like tug-o-war, science and nature are continuously battling one another, determined to be the one who comes out on top.

From the start, Victor Frankenstein is portrayed as a man of science, one with little regard for the natural order of the world around him. Soon after his mother’s death, Frankenstein escapes into his world of science far away from his family. While pursuing his love for science, he uses his knowledge to unnaturally bring life to dead body parts. Though science brought life to the creature, the repercussions of Frankenstein’s actions deeply affects those he loves.

After Frankenstein leaves his monster, the unfortunate creature is left to navigate the complicated world that surrounds him. As he runs away, the monster spends his time surrounded by nature as he is determined to learn from the DeLacey family. Much like the natural evolution of a small child, the monster learns how to speak and act like a human. Throughout his time spent there, he also becomes more self aware of what he truly is and develops the importance of emotions like love. Despite his unnatural creation, the monster evolves into a being that becomes more human on the inside.

Opposite from the monster, Frankenstein slowly deteriorates and becomes miserable in the absence of nature. After years of being consumed by his science, Frankenstein lacks connection with nature and seemingly turns into an unreasonable and rash individual. As he is back with his family, Frankenstein can only find peace when he is out in nature.

Throughout the novel, the dichotomy of good and bad is closely tied with the juxtaposition of nature and science. While the monster was created unnaturally within a lab surrounded by science, he learns the importance of emotion and slowly evolves to become more human and becomes closer with nature. On the flip side, Victor Frankenstein was a family man who became consumed by his pursuit of science, which later resulted in the destruction of both his family and himself. It is through both the monster and Frankenstein that this novel portrays that nature will prevail as it is more powerful than science. The Romantics were right, being in nature and acting within the natural order is what makes us fully human.