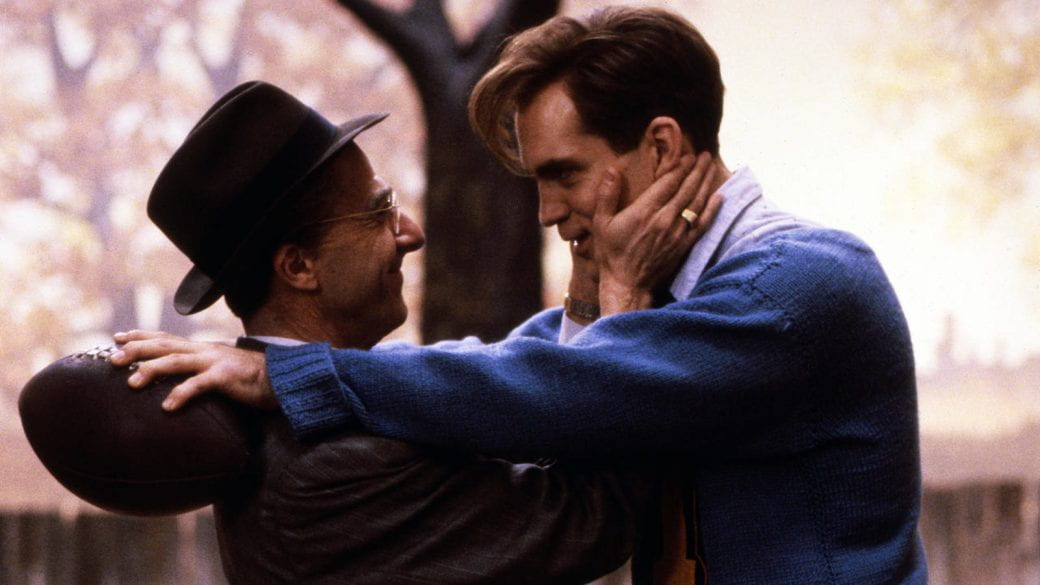 One of the most fraudulent conventional beliefs from history which continues to pervade time – The American Dream. A dream built off of broken promises and unrealistic expectations; this dream drowns us in illusions. People will blindly follow conventional standards and burden others with the responsibility if they can’t attain what they are pursuing, which takes shape in the form of expectations too high to be met. These expectations are shackles and can act as constraints on one’s life, making it an impossibility for an individual to pursue their own desires. As a result, these same individuals will come to realize that the journey of self-discovery is only possible if they reject these constraints of convention, thereby, living according to who they are. From Arthur Miller’s modern play, Death of a Salesman, Biff Loman is a 34 year-old ‘boy’ who is constantly at war with two opposing ideas: choosing between his own personal desires or the ideal vision Willy, his father, expects him to live up too, which is Willy’s distorted form of the American Dream. Through the text, Miller demonstrates how when a lost individual is oppressed by the constraints of convention, they will be tricked into believing the false ideals of others and consider partially acquiescing to these constraints. However, individuals will realize the false promise of these ideals and come to reject the unrealistic expectations externally imposed upon them, thereby, discovering their true identity and not a distorted version of themselves.

When individuals lack the clarity to see who they really are, they will remain confused and conflicted on whether they should pursue their personal desires or give in to the constraints of convention imposed on them. As Biff returns to the city, he comes to a home where an ‘air of the dream clings to the place’ (Miller 11). The flute playing in the background reinforces the nature of his father’s clinging and constraining dreams, illusions, and oppressive ideals: distant and unreal. Biff speaks with Happy and conveys his feelings of uncertainty and confusion on whether his own desire to work on a farm is a dead-end job, which makes Biff seem like he may potentially consider submitting to his father’s expectations of doing something bigger with his life: “I’m not gettin’ anywhere! What the hell am I doing, playing around with horses, twenty-eight dollars a week! I’m thirty-four years old, I oughta be makin’ my future. That’s when I come running home. And now, I get here, and I don’t know what to do with myself.  I’ve always made a point of not wasting my life, and everytime I come back here I know that all I’ve done is to waste my life.” (20). His lack of personal ambition and conviction is precisely why he is still considered a ‘boy’ in his father’s eyes and why he vacillates between submission to these constraints and attempting to pursue freedom. In Willy’s misty eyes, both his sons are ‘built like Adonises’ and Biff is like ‘Hercules’ when he is on the field – his boys have the natural attributes that would make success easy. Biff is living in the present, not the past, but Willy still sees his son as the golden boy from high school who is ready to win another game and is ‘well-liked’ by everybody. This characteristic of being liked is a part of his father’s distorted view of the conventional yet elusive American Dream; however, Biff doesn’t wish to pursue such an ideal but also realizes the importance of him needing to create a future for himself, one in which he can find a sense of success. Willy’s pursuit of success is what Biff is hinting at pursuing for himself. Because of his reliance on Willy to take responsibility for him when he was a kid, it has made it difficult for him to take complete responsibility for himself as an adult, so he reverts back to the only pursuit he knows, his father’s conventional pursuit – the constraining pursuit that he has always attempted to avoid.. As individuals who are lost begin to notice their lack of material success when pursuing their personal desires, they will consider giving in to the constraints placed upon them by others, failing to predict what the outcome could be. The failure of these individuals to take responsibility for themselves is why they begin to consider that submission to their constraints will perhaps liberate them from the burden of having to dictate their own life.  Hence, Biff recognizes that his aimless pursuit of his personal desires are preventing him from finding success, so he returns home with the intention of submitting to the constraints of the conventional ideals of his father.

If an individual already feels self-doubt in their own pursuits, it doesn’t take much for them to be blinded by the false ideals of others and consider submitting to the constraints placed upon them. In Biff’s discussion with Happy earlier on, he begins to think about talking to a former employer, Bill Oliver, to get a loan from him, although Biff’s initial sentiments towards city jobs were that they were a ‘measly manner of existence’ (Miller 22). His previous perception on these careers is highly ironic when looking at his current willingness to apply for a loan from this job. Upon realizing Willy’s attempts at suicide with the car accident and the rubber hose, however, Biff realizes the necessity of him having to go for the interview and is once again fed by Willy the illusion that Bill will still remember and acknowledge Biff because he was ‘well-liked’ by everybody. Biff’s gradual acceptance of his father’s constraints of convention is seen when expressing his certainty in Bill Oliver’s support by saying, “He did like me. Always liked me (Miller 64). By falling into this trap, Biff goes to interview for a loan from his former employer, submitting to the conventional constraints that his father placed on him. His father’s dream is slowly taking over his own desires. Furthermore, his illusions are shattered when Bill Oliver didn’t recognize him, and Biff is made aware that he was not a salesman for him but a ‘shipping clerk’, making him question the nature of his father’s dream. He instinctively stole Bill’s pen, and the symbol of the pen made Biff realize the reality of what his father had turned him into by feeding him illusions and glossing over the truth ever since he was a kid. Upon realizing his true lack of self worth, Biff begins to realize how Willy’s constraints that he placed on Biff were nothing but romanticized lies – lies which prevented him from pursuing what he wanted to do. This is precisely why individuals who begin to submit to the constraints of convention will realize that they have been endlessly attempting to satisfy the expectations of others for their entire lives which, therefore, made them pursue a distorted version of their own identity. After individuals realize the false nature of the constraints placed upon them, they will feel cheated into submitting to the phony ideals of others.

Consequently, upon recognizing that an individual’s constraints of convention were built around a lie, they will come to reject these expectations placed upon them, realizing what they truly desire and finding their own identity. Instead of becoming a carpenter with the skills he already has and creating physical walls, Willy is deluded by the false promise of the American Dream and creates emotional barriers around Biff in an attempt to control him and make his son pursue the same dream. Biff’s confrontation of Willy is an iconic moment as he is breaking down the walls that Willy has spent so long building up. He realizes that Willy is ‘not gonna see’ him for who he is, so he has given up trying, but his father keeps instigating him through insults, which pushes Biff to his breaking point. Biff’s attempt to reject these constraints, that Willy placed on him, is because of the fact that Willy’s dream is a broken promise, seen through how they ‘never told the truth for 10 minutes in this [Willy’s] house’(Miller 131). He is so fed up with his father’s false ideals, and all he wants is for his father to take his phony dream and burn it, which reveals his attempt at being free from the unrealistic expectations Willy had of him. A parallel can be made in how the fountain pen made Biff aware of his reality; in the same way, Willy was confronted with his reality when Biff slammed the rubber hose on the table and called him a ‘phony’. Although confronting his father was a critical point in Biff’s journey of maturity, it is only when Willy dies that the Loman family is free from the falseness of Willy’s ideals. The ending is significant for Biff in that by rejecting and liberating himself from these constraints, he has discovered his identity, evident in when he tells Happy, ‘I know who I am, kid’ (Miller 138). This is the point where Biff has matured and realized how necessary it was to reject the constraints of his father, as now he can finally go out and pursue his personal desires – desires which reflect his true identity. Furthermore, the flute is played once again near the end of the novel, emphasizing how Willy’s pursuit of the conventional American Dream was only ever a failed pursuit. The American Dream led to Willy’s self-delusion and his demise, and Biff refused to have these unrealistic expectations continue to act as a burden on him. Individuals will eventually gain the conviction to reject the constraints of convention and be capable of pursuing more realistic desires, which allows for them to finally discover their identity.

As individuals are oppressed by the constraints of the people they are surrounded with, they will fool themselves into thinking that these false ideals are a possibility. However, as individuals realize the false promise of these unrealistic expectations, they will reject these constraints and, ultimately, discover the true nature of their identity. Expectations act as constraints on one’s life and make it impossible to pursue one’s own desires. People will blindly pursue their broken dreams and when they don’t find success will pass this burden on to others in the form of expectations. These broken promises and unrealistic expectations of the American Dream are tempting, but they will drown an individual in their illusions and make them pursue a dream which cannot be attained, making them lose sight of who they really are.

One thought on “A Wrong Dream: Polished Critical”