Prompt: What do these texts suggest about the conflict between pursuing a personal desire and choosing to conform?

Based off the image, Diogéne Ou La Lucidité by Gilbert Garcin 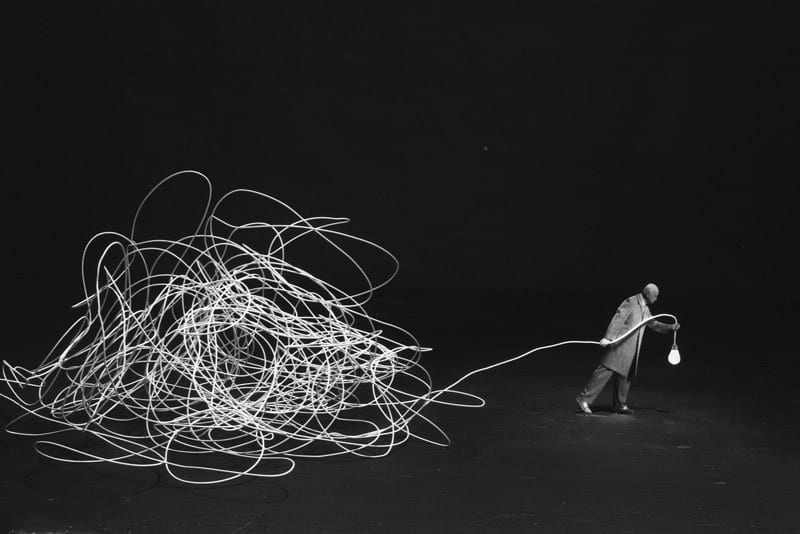 We are all born in darkness, held up against the underside of our mother’s belly, umbilical cord coiled and naught – but he was born eyes open, gazing into the overhead, luminous lamp of his hospital room. A shaded square in the Lacomb’s pedigree, a child sprung from a trampoline made up of generations of  movie stars, politicians, and old money: a genetic quilt of intricacies. Bloody, shrieking, pain locked in his spine, nerves pulsing with breath and life. He was not born beautiful – like his grandmother so desperately wanted him to be – he was born honest. A disappointment in the eyes of a family so defined by illusions and sophistication.

His name was Constantine Lacomb – but, despite everyone’s annoyance, he went by Stan.

In his family, honesty was not a virtue, nor was order, nor reason. Throughout their home, they lived shrouded in grandeur, illuminated by the sparkle of crystals embedded in the decor and the ornate trimmings lining every corner- this was the way the Lacombs lived. This was the way everybody lived:  worth determined on the amount of unnecessary detail in the simplest of possessions, truth masked by lace and luxury. Stan often felt bombarded by glamour, blinded by the elaborate scheme of his family’s household. However, sometimes – when no one was watching, of course: Stan marvelled at the elaborate structures of  the house. Especially, when he could catch light reflecting in the arches of the glass candlesticks centred on the dining table. Moments such as these lasted only a minute or so, for Stan would quickly realize how this light would cast shadows on the room, creating twisted and tortured shapes. Due to this, in order to pass through the dining room, he shut his eyes as he rushed through the halls, arms stretched out, reaching to contact the plain, silver doorknob of his room.

Stan’s room was different. Furniture was only defined as an necessity; thereby, he only had a bed, a bookshelf, and dozens of stripped lamps. Stunning, glorious beams of luminosity encapsulated in thin orbs of glass.  He was safe in his room of light where nothing was ever concealed – no matter how devastating the truth of it may be. In his room, he didn’t have to conform to his parent’s unnatural need to complicate everything- to tangle and cluster. Simplicity was his sanctity; all he desired was the commonness of life. In fact, he had often  wondered how he managed to live under his parent’s roof without losing himself in the endless decor, and how his parents constantly found ways to place nick-knacks outside his door: silver sculptures, intricately wrought mirrors, fur rugs, all in an effort to make Stan;s room a little more interesting.

“I can’t even step foot in your room without thinking I’ve entered a prison,” his mother greated him on his way to his bedroom through the living room. He hated when his mother spoke to him like this. She was lying anyway – she’s never stepped foot in Stan’s room, only peers in from time to time – shuddering at the starkness

Stan  never succumbed to his mother’s extravagant chaos, or his father’s elusive demands – a house full of hypocrites and people much too complicated to be direct and much too direct to be sincere.  Stan hated his family’s self-indulgence, their extraneous nature. Instances of triviality and frivolity stabbed at his nerves, such as the way his mother attempted to tangle the smooth sheet of hair on his head because she much prefered it to have volume whereas he much preferred it to have it tucked away from his face- no matter how boring everyone thought it looked. He was trapped in a spiderweb of superficiality, and convoluted convention, although he truly believed that his lights would guide him. His lights would bring him to a place of reason and lucidity. He needed nothing more than clarity within his family’s chaos. It was then Stan decided that he must leave. He would never find himself among the hoards of  senseless, snobby luxury.

Stan waited till it was evening to leave the intricate nest of his family’s home. Although, as he began to exit his room, gripping the wire of his longest and most resilient light bulb, he noticed how brilliant the interior of the Lacomb house appeared in the gentle shine of moonlight. The tranquility of the moment nearly convinced him to stay, until he turned on his light and winced at the harshness of the reflection of the cold,chaotic, and splendorous decor.  As he almost reached the door, a clamorous clatter echoed through the room: the cord of his light became twisted around the glass candles sticks – now chipped on the marble tile. He moved quickly, but as he reached for the front door, a thought struck him: Glass doesn’t just chip – it shatters. Realization froze the blood in his veins, his heart rattling from the shock pulsing in his spine; the candles were not real glass. His family were not the elites they perceived themselves to be, nor were they any more than the artificial light streaming through his bulb.

Tugging along the wire, Stan departed, leaving a faint blur of radiance behind him, exposing a world too obvious to describe, a world too real for him to materialize.