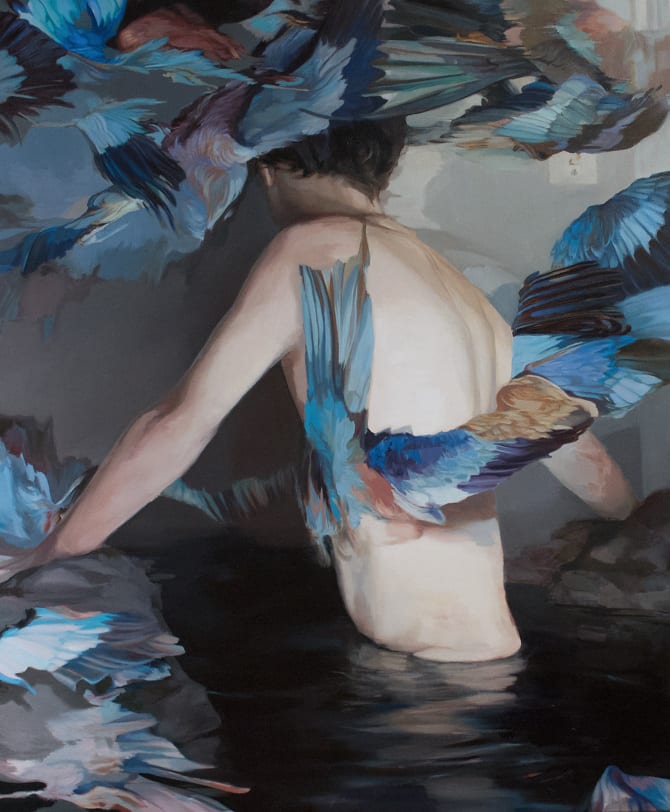 Prompt: (...) the ways in which individuals pursue or compromise their happiness. (Jan 10)

Happiness is often thought of as an intangible experience; however, happiness for some may be embodied within an object or another human being. This happiness may be brought about through a love interest and the feelings a certain person may invoke. Furthermore, in the face of unrequited love, happiness may be a distant thought – it can force an individual to blindly follow in their pursuit of that unreturned affection.  In William Shakespeare’s humorous play, “A Midsummer Night’s Dream”, the idea of the pursuit of happiness found in one’s love interest is explored through the character of Helena. Desperate and blinded in the face of love, Helena chooses to personify happiness in the character of Demetrius – believing that gaining his affection will grant her joy and fulfillment – through this pursuit, Helena’s relationship with others and herself becomes strained. She becomes narrow minded, focusing all her attention on a singular desire. Ironically, this pursuit of happiness, at times, leaves her completely unhappy and dissatisfied. In other words, Shakespeare displays that, when an individual blinded by affection mistakenly embodies happiness through another person’s attention, this results in one to neglect other meaningful relationships in order to direct one’s attention in this blind pursuit – leaving the outcome of one’s future to be uncertain.

Happiness is a direct state of mind, however, many can pursue their version of happiness, but never truly achieve it. This is something Helena may not understand. Through Helena’s passionate affection towards Demetrius – her embodiment of happiness – she is completely dissatisfied for Demetrius does not return that sense of affection, rather, he has set his sights on Helena’s close friend: Hermia. This results in much mental strain: Helena constantly doubting her appearance, in one act, she is having a conversation with Hermia, she asks her friend to inform her of the qualities that makes Demetrius so fond of Hermia. Through this lengthy conversation, Hermia describes all the ways in which she has tried to present herself as unattractive to Demetrius, but this only makes him desire her more. This conversation reveals Helena’s self insecurity, as she is unable to comprehend why the one thing she desires – her happiness – is so incredibly hard to grasp, yet, so easily available to Hermia, even though it is not something she is pursuing. Thus, this questioning not only sends Helena into a more passionate pursuit of happiness, it also creates tension between Helena and  Hermia. This tension initiates the start to her neglectance of relationships due to her pursuit of unrequited love, or in other words, her happiness – Demetrius. It can be said that during the pursuit of happiness, dissatisfaction within one’s self, brought about by another’s success, predisposes an individual on an, ironically, unhappy course. This not only initiates conflict within one’s relationships – Helena and Hermia – rather, it fuels one’s desire of pursuing a seemingly unreachable goal of happiness.

Then, it is possible in which an individual’s blind pursuit of happiness is hindered due to a sudden change of events. This quality is seen when Demetrius is mistakenly put under a love spell, suddenly his attitude towards Helena is changed and he sees her as a “divine goddess” and misguidedly falls in love. Not knowing of the love spell, Helena takes this sudden shift in attitude as an insult and a mockery – rather than a compliment and fulfillment of her happiness. Through this, it can be displayed that when her happiness should finally be fulfilled, Helena is unable to accept it, rather, allowing her own self doubts to hinder her desires. This response may have been a direct result of her own inner conflict: her own relationship within herself becomes strained as she is constantly questioning her self worth: always mistaking her self worth and believing that Demetrius’s actions are out of cruelty. These misguided thoughts hinder her pursuit of happiness, resulting in her to become extremely dissatisfied. Helena is unable to detach her damaged relationship with herself in order to continue her pursuit of Demetrius’s affection – even as it is gifted to her, right in her grasp. Through this, it’s shown that an individual may become infatuated with one’s own critics and one’s unhealthy perception of self image that this briefly hinders an individual’s pursuit of happiness. With this being said, perhaps Helena’s passion and determination is too great for self doubt to triumph over her pursuit of happiness.

The original determination in which promoted an individuals pursuit of happiness may become hindered, however, overtime it may resurface once again, allowing an individual to re-establish that passion. In terms of Helena, although she allowed her self doubt and fragile relationship with herself to shatter her pursuit, she is slowly able to once again come to terms with her unshakeable desire of happiness. Finally, after the four lovers are found laying on the a wheat field, and Demetrius establishes his strong desire to be with Helena, she is able to accept her reality: she has finally achieved happiness – the genuine reciprocation of Demetrius’s affection.  In the end, through her crazy endeavor of happiness, the relationship between Demetrius once cold and unloving attitude towards her shifted and although Helena was uncertain about the outcome of this pursue, she kept with it. This proved to be extremely rewarding. As can be said, although the pursuit of happiness may have challenging moments, the outcome, whether good or bad, has valuable lessons to be learnt.

To embody happiness – an incredibly grand emotion – within another individual is placing one’s trust into another’s choices. This proves to be extremely challenging on external and internal relationships. This especially is true when one’s happiness is defined as one’s love interest. As displayed through Shakespeare’s play, “A Midsummer Nights Dream”, through Helena’s passionate endeavor of Demetrius’s unrequited love, she had found many struggles along the way: one being the instability of her relationships with others and herself. This is brought about as her sole attention become drawn on a singular desire – to gain happiness, which is to gain Demetrius’s affection. Ultimately, when an individual blinded by affection mistakenly embodies happiness through another person’s attention, this results in one to neglect necessary external and internal relationships.