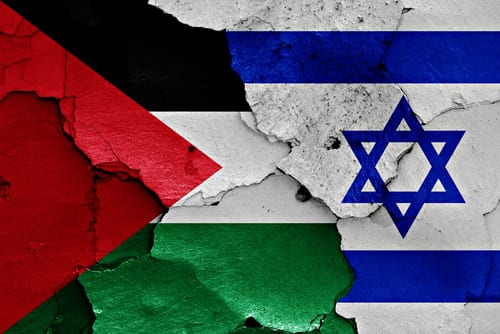 Prompt: Read the following poem carefully. Then write an essay in which you discuss how such elements as language, imagery, structure, and point of view convey meaning in the poem. (1993)

In his poem “We Shoot Children Too, Don’t We”, Dan Almagor – through his use of language as evidenced in his word choices – employs imagery, structure, and point of view to express his perspective on the Israeli-Palestinian Conflict. The author creates a picture of an identity struggling under chaos and emphasizes the lack of humanity – and thus, the need thereof – through devices such as symbolism, repetition/anaphora, and pronouns. All the while, he affirms the need to look through the eyes of the other through addressing both Israeli and Palestinian perspectives, thereby garnering sympathy – and ultimately understanding – from his readers.

Through the use of vivid imagery and allusions, Almagor illustrates patriotism felt by individuals who desire to protect and preserve their identity. Almagor begins the poem using the symbol of an olive tree in the line, “Most of these people truly desire/To harvest their olive trees,” highlighting both the necessity and significance portrayed through the sacred plant. According to historical associations, olive trees symbolize peace, victory, and friendship. When Almagor speaks of the nation’s desire to cultivate the olive tree, it denotes their want for the restoration of peace and harmony among the conflicted nations. Furthermore, in relation to biblical allusions, Israelites who were sick were often anointed with olive oil and recovered from a previous state of weakness. Undoubtedly, sickness and death are prominent factors of the conflict; however, the desired growth of the olive tree, once again, reinforces the Palestine nation’s yearning for health and wellness. Having the ability to thrive on poor, stony soils, olive trees require minimal nourishment  to grow, and when Almagor uses this imagery to describe the Palestinians, it denotes the resilience of their desire for peace among conflicted nations. Almagor further explores the prevalent themes of identity and pride through the recurring images of the Palestinian flag. The obvious representation of flags are a form of identification and pride for one’s country; however, Almagor synthesizes more significance through the portrayal of a risen flag in the lines, “Most of these people truly desire…/to raise a flag./Their own flag./And facing that flag, to cry/As we did, that night, then, excited as we were.” The imagery of a raised flag evokes the feeling of victory and independence that have been deprived from the citizens due to the Israeli-Palestinian conflict. Along with national pride associated with a risen flag, Almagor draws attention to the sufferings that one endures in efforts to attain desired identity through the imagery of tears and cries of the afflicted. Through the use of such imagery and allusions, Almagor emphasizes the desires of an oppressed nation in their pursuit of attaining national identity and independence.

In terms of structure, Almagor employs several devices – particularly anaphora, repetition, and diction – in order to convey the meaning of the poem. Especially evident in his first and second stanzas is his use of anaphora, which he uses to emphasize a sense of pathos. By starting with “Most of these people truly desire”, Almagor repeatedly asserts the idea that like the Israelis, the majority of Palestinians are filled with the desire to simply pursue their own way of life, one free from conflict and oppression. He reinforces this through the repetition of the word “peace”. In the same vein, his repetition of “have no”, “these tears”, and “always” emphasizes the humanity in the Palestinians, as well as draw attention to the injustices committed by the Israelis. In the second stanza, Almagor starts several lines with “And those who”, which allows him to point out the general hypocrisy in Israeli society – by emphasizing their lack of action, Almagor conveys his perspective on Israel’s inaction, thereby enabling him to evoke ethos in an attempt to garner sympathy, and perhaps action, from his readers. His repetition of military ranks, especially the word “Colonel”, lends the poem an air of oppression, which also emphasizes Israel’s lack of humanity – this purpose is strengthened through repeating the word “humiliation”.  Almagor strives to do the same through diction, which is especially evident in the line, “Mean, arrogant, and dumb.” By using these three specific words, Almagor criticizes his own people, which illustrates the disappointment he feels in regards to Israel’s actions; through this, he implicitly expresses that if one refuses to lower one’s pride and indifference, peace cannot be achieved. Repeating the word “will” in his last stanza reflects his certainty in the establishment of a Palestine state – reiterating his idea in the desire of people to pursue their way of life by way of independence – while the word “shame” ends the poem on a note of ethos. By doing so, Almagor sums up the meaning he tries to convey in his poem – that for an oppressed nation to survive the trials caused by the lack of humanity, it is important to affirm and uphold human dignity, regardless of identity.

In this poem, point of view and language is shown through the use of pronouns, pathos, and ethos. To illustrate this, the author writes in the first line, “these people” which refers to the point of view of the Palestinians; it starts by explaining that not all Palestinians are enemies, rather that they are people in pursuit of independence that Israel has also strived for. Furthermore, the language in the first stanza appeals to the pathos of the reader; in other words, the empathy invoked through the lines, “Most of these people truly desire to raise their kids/not to throw stones…/ but to study in peace,”  in that they too want to pursue freedom in their life without the constraints of war and conflict. Almagor further asserts that the Palestinians are seeking freedom from oppression in the lines, “As we did, that night, then, excited as we were.” Here, the author brings in pathos by referring back to the feelings that the Israelis experienced on the day they gained independence. By utilizing these emotions, he is able to bring insight and understanding from each side. In concession to this, the pronouns shift in the second stanza to “us” in which the author refers to Israelis; although the author is still loyal to Israel, the use of his language raises awareness for the injustices committed against the Palestinians. In this verse, ethos is indicative through the lines, “yes, we’ll all get our summons one day” which suggests the whole Israel nation will get their own summons to war, and justice will someday be served. Through this, the author asserts that it is only just that the inequity of power would be balanced in the end. This stands as a warning to the people of Israel –  a warning for repentance – alerting his people that the violence committed against the Palestinians are parallel to the history of World War II. Similarly, the pronouns shift to “we”, in the last two stanzas, indicating the faults of both sides. Both sides claim to be responding to each others’ provocations, but much of the conflict lies in the consistent failure on understanding the legitimacy of the other’s narrative. These stanzas bring a sense of ethos, in that the author equalizes the sides by appealing to human moral in the lines, “Who do we think we are?” invoking a sense of ethical violation in that the Israelis disregarded their violence against the Palestinians in the name of patriotism. By using pronouns, pathos, and ethos, Almagor allows his readers to extract meaning from his choice of language and the perspectives he wrote in his poem.

As the cause of the fall of nations, and the birth of others, the desire for independence runs deep throughout human history, ignoring both geographical boundaries and racial divisions. However, this inverse relationship forces the nations involved into a power struggle that results in chaos – thereby robbing individuals of the security they need, as well as greatly decreasing the chance for a life they desire. Through his poem “We Shoot Children Too, Don’t We”, Almagor, through his masterful use of language, employs vivid imagery, structural devices, and several points of view to convey the meaning that a sense of humanity is necessary for the survival of a nation; without it, conflict and chaos are usually only strengthened, thereby preventing a people from affirming their identity by means of independence and pursuing the way of life they have always desired.