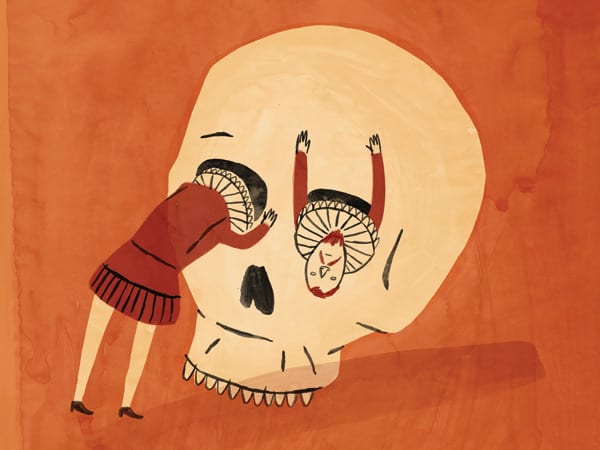 There’s a thought I’ve been turning in my head, over and over; I can’t seem to make sense of it, and every time I try to fight its dizzying waves, I find myself carried away by its ebb and flow –

is it really better to be alive in a box than dead in a box?

“Ask yourself: if I asked you straight off – I’m going to stuff you in this box now, would you rather be alive or dead?”

You are, for some reason or another, contained in a box.

You wiggle your toes and your fingers, pins and needles – good, nothing seems to be broken. As you try to bring your hands up, get a feel for your confines,  you jam your elbows on the rough edges of your prison, and no matter how much you try to draw your arms up and out so that you may at least attempt some semblance of escape, you are unable to. You must settle with crossing your hands over your chest – but it’s alright, isn’t it? You can feel your heartbeat; your hands sink and swell ever so slightly with the rhythm of your breath.

Your breath – you… you are breathing, right?

You open your eyes – or do you?

It’s dark – so, so dark – that perhaps you would be better off closing your eyes anyways.

How long before empty becomes enough?

Perhaps something is broken.

Of course, there are a variety of different boxes to which we may condemn themselves – we needn’t feel limited to only one.

The box I just described? That’s my Despair Box. Lately, I seem to be spending a bit more time in there, since I’ve realized that I am quite possibly a quarter of the way through my life and I have accomplished next to nothing.

The box right beside it is the Uselessness Box. You’ll note that it is just a metal frame without walls – it fails as a box, much as I fail as a human being.

If you look a little ahead, you’ll see the beginnings of my Procrastination Box – I’ll finish it off soon enough, I imagine, right after I finish building the Self-Hate Box, the Incompetence Box, and the Inadequacy Box.

It really is quite the endeavor, don’t you think?

These are my Boxes. I am my own antagonist, the creator of my little coffins, the Boxes through which I stifle my soul, not because I want to, but because I’m afraid I deserve it.

You know, not many people realize it, but it gets awfully lonely, sitting here building these Boxes.

“Life in a box is better than no life at all. I expect. You’d have a chance at least. You could lie there thinking, well, at least I’m not dead. In a minute, somebody’s going to bang on the lid and tell me to come out. (knocks) “Hey you! What’s your name? Come out of there!”

And so I waited.

I waited in my little Box, fingers pressed firmly against my chest, because how could my hands – these hands that condemn and cage – also be the hands that save?

“We pledged our identities, secure in the conventions of our trade; that someone would be watching. And then, gradually, no one was. We were caught, high and dry. It was not until the murder’s long soliloquy that we were able to look around; frozen we were in the profile, our eyes searched you out,
first
confidently,
then
hesitantly,
then
desperately
as each patch of turf, each log, each exposed corner in every direction proved uninhabited, and all the while the murderous King addressed the horizon with his dreary interminable guilt… Our heads began to move, […] and the King faltered.
Even then, habit and a stubborn trust that our audience spied upon us from behind the nearest bush, forced our bodies to blunder
on
long after they had emptied of meaning,
until like runaway carts they dragged to a halt.
No one came forward.
No one shouted at us.
The silence was unbreakable, it imposed itself upon us;
it was obscene.
We took off our crowns and swords and cloth of gold and moved
silent…“

How long have I waited for someone to knock on these Boxes of mine, while I stiffened my own hands against any semblance of struggle?

If you are alive in a box, are you even really alive? Perhaps you’re just pretending you’re not dead.

I look down at my hands.

All my life, I have eaten out of the hands of others. I have waited for them to ascribe to me some sort of significance without ever attempting to find it first within myself.

I have lost so much to myself.

If I try to regain it, will I stop hurting?

Tentatively, with great trepidation, I press my palms flat against the Box. I confront the convict and the jailer, the Heaven and the Hell, palm-to-palm with an almost-stranger.

I walk away from the Boxes I have built, from the Despair and Procrastination and Inadequacy and Incompetence and Self-Hate that have claimed my soul for far too long.

A Box is just a box.

“We cross our bridges when we come to them and burn them behind us, with nothing to show for our progress except a memory of the smell of smoke, and a presumption that once our eyes watered.”

And again, I say:

“Ask yourself: if I asked you straight off  – I’m going to stuff you in this box now, would you rather be alive or dead?”

Before I get any concerned emails from you guys, let me reassure you – I’m alright! 🙂 Whilst watching the haunting, ethereal magic that was Rosencrantz and Guildenstern are Dead, there were two quotes that struck me fiercely; namely, the quotes about the desire to have someone watching after us – and therefore, caring for us and looking out for us – and being deprived of that, as well as the quote where Guildenstern puts on a brave face and resolves to know better next time. Looking back on it, I think the response reads a little like how Rosencrantz thinks and speaks, which is kind of cool since Rosencrantz is low-key my spirit animal. I feel that I was able to somewhat understand why these quotes meant so much to me via the connection to the Boxes within us all. To be deprived of company, – love, caring, a chance at understanding – to be forced to stalk the stage of life alone, without guidance, as though you meant nothing, is, for me, perhaps the epitome of despair and hopelessness. It makes my heart hurt, that one could be deprived the very thing that sustains them and provides them life. Personally, the quotes also stirred religious sentiments in me. There are two mediums through which my soul manifest – my writing, and my religion. You don’t know me until you know just how much these two feed my being – everything else stems from the unity they spur within.

Sometimes, I can’t help but be wrought with despair when I think back on the various ways in which I’ve screwed myself over, sinned against the values I claim form the core of my spirit. The separation this fuels in me – this divide between the desire to hate myself and the desire to allow mercy to absolve me – was brought to the forefront through these quotes.

How many times have I abandoned myself in my own boxes? How many times has my own self-pity prevented me from seeking the mercy I so desperately craved? In denying myself respite, I deny myself the connection to God – I deny myself the only thing through which I find peace. How could I turn away from the One who watches over me graciously? How could I blind myself to the One who is cognizant of the contents of my heart? I find solace in knowing that when I turn back from my mistakes, when I seek God’s Grace, my gaze will not falter from confident to hesitant to desperate – for how could one return disappointed from His Kingdom? I don’t know that I could bear turning around only to find myself deprived, without somewhere to return to.

Everyone needs a home.

There is a supplication – known as the Supplication (or Dua in Arabic) of Kumayl – and every time I read it, I can’t help the hope that blooms within me once more. It’s a prayer that reminds me that outside of my boxes, the confines of my insecurity, there is always, always someone, so long as I am able to recognize that fighting for these connections is worth it.

This is a prayer from my heart, my home, to yours. I hope it finds you happy and content, and if not, then I hope it reminds you that there is someone waiting, with their hands pressed against the wall of your box, supporting, longing for your wellbeing:

My Nourisher! Have mercy on the infirmity of my body, the delicacy of my skin and the brittleness of my bones…

o’ Thou! Who is readily pleased, forgive one who owns nothing but supplication, for Thou doest what Thou willest.

o’ Thou! Whose Name is the remedy (for all ills) and Whose remembrance is a sure cure for all ailments and obedience to Whom makes one self sufficient;

have mercy on one whose only asset is hope

whose only armor is lamentation.

Rosencrantz and Guildenstern are Dead