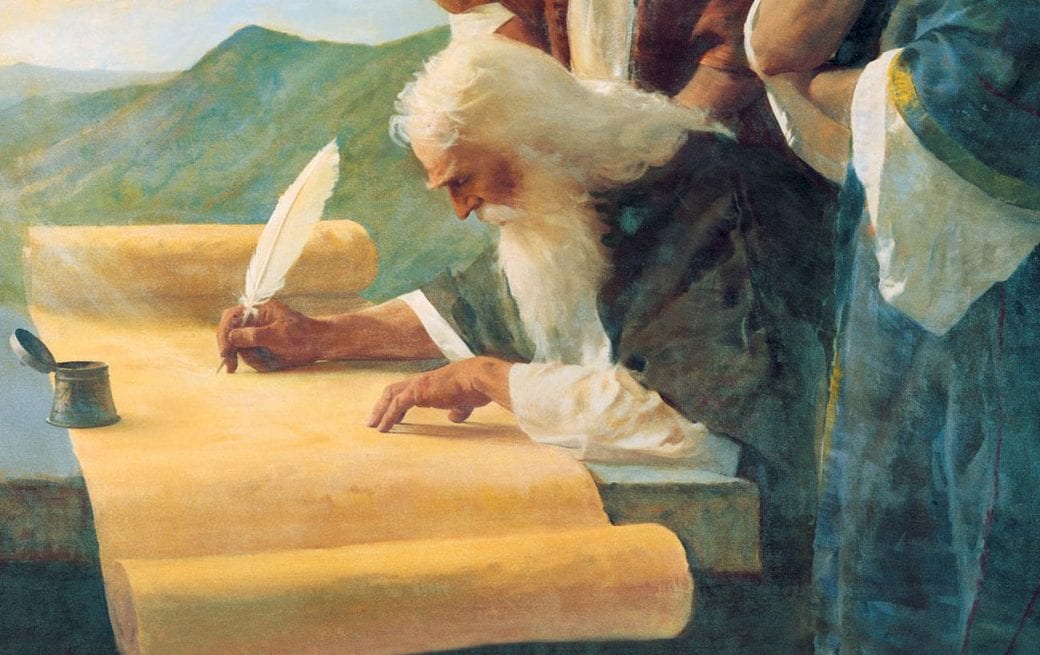 Thousands of years ago, ancient fathers captured divine words and kept them in records on stone tablets. These sacred words were protected under the Israelite culture, surviving generation after generation of history and evolution. The hidden mysteries of God were unraveled through stories, poems, songs, dreams, and letters of the chosen people of Israel. After 1500 years, these pieces of literature came together to form the orchestrated creation of one magnificent book. These writings have witnessed the rise and fall of man, war and destruction, bondage and freedom, and birth and death. It’s pages were torn out and scorched in the flames of fiery. It was banned; denied to exist in the cruelty of political and societal control. Yet, it survived. It’s words are proclaimed in great pulpits, alleys, and villages, shining as bright as a candle in a darkened room. And now it sits on the shelfs of many homes, providing healing and comfort to the lost ones. The Holy Bible.

“The grass withereth, the flower fadeth; but the word of our God shall stand forever” (Isa. 40:8 NKJV)

The Bible is no ordinary book; it encapsulates 66 books which are classified as the Old Testament and the New Testament. The first thirty-nine books are from the Old Testament, recording significant narratives, prophecies, poems, and songs of the saints from before Christ. The New Testament introduces the story of Christ, epistles and letters given to the early churches, and of future events. Despite it’s authorship of 40 writers, the Scriptures manifests it’s unification from the beginning of Genesis to the end of Revelation by articulately flowing from one book to the next. The context of the book are the words of God, it’s mysterious and truths are discerned through the knowledge of the Holy Spirit. One may study the Bible for their whole life and not yet come to a full understanding of its depth and meaning. With this in mind, let me introduce one particularly interesting book that has always been a personal favourite.

The Book of Daniel is the 27th book of the Bible and is classified as a prophetic book written before the coming of Christ. The author of this book, Daniel, writes of the fall and rise of the Babylonian empire, the captivity of the children of Israel, and fascinating visions of world governments. It contains history from the time era of B.C. 606 to B.C. 534 (note that B.C. years are in decreasing order). The Babylonian empire, known as the cradle of mankind, occupied the plain lands near the banks of the Euphrates-Tigris River. In B.C. 606, the Babylonian King Nebuchadnezzar attacked Judah (inhabitants of the children of Israel) and destroyed their land. Members of the royal household and the princes of Judah were taken to Babylon as captives – among whom was Daniel.

“In the third year of the reign of Jehoiakim king of Judah, Nebuchadnezzar king of Babylon came to Jerusalem and besieged it.” (Daniel 1:1 NIV)

Babylon reached the pinnacle of its glory in the days of King Nebuchadnezzar. Historians described Babylon as the revolutionary city that had great advancements in power, armed force, land mass, architecture, and beauty. The walls that fortified the city rose to a height of 350 feet and was wide enough to carry six chariots parallel to one another. The Euphrates River flowed through the middle of the city and nourished the citizens. Both sections of the city were connected by a 12 feet high, 15 feet wide underwater tunnel system. The aesthetically pleasing hanging gardens, once established as one of the seven wonders of the world, originates from ancient Babylon. The palace and temple of Baal were great examples of the intricate architecture of the beautiful city.

“Is not this the great Babylon I have built as the royal residence, by my mighty power and for the glory of my majesty?”  (Daniel 4:30 NIV) 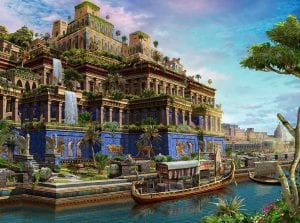 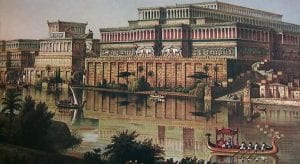 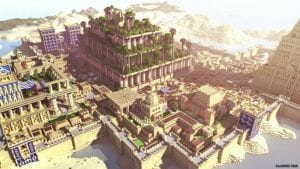 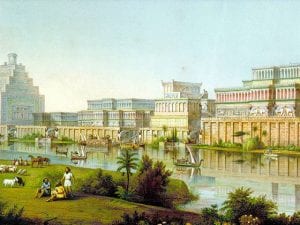 In the second year of Nebuchadnezzar’s reign, the King saw a dream and his spirit became deeply troubled that he could not sleep. Nebuchadnezzar commanded his magicians, astrologers, sorcerers, and Chaldeans to tell him his dream and give the interpretation. His servants failed to identify the dream and give an interpretation causing the King to become severely infuriated. Upon hearing the events of the royal courts, Daniel approached the king and pleaded to show mercy upon the wise men of Babylon for God had revealed the King’s dream to Daniel:

31 “Your Majesty looked, and there before you stood a large statue—an enormous, dazzling statue, awesome in appearance. 32 The head of the statue was made of pure gold, its chest and arms of silver, its belly and thighs of bronze, 33 its legs of iron, its feet partly of iron and partly of baked clay. 34 While you were watching, a rock was cut out, but not by human hands. It struck the statue on its feet of iron and clay and smashed them. 35 Then the iron, the clay, the bronze, the silver and the gold were all broken to pieces and became like chaff on a threshing floor in the summer. The wind swept them away without leaving a trace. But the rock that struck the statue became a huge mountain and filled the whole earth. (Daniel 2:31-35 NIV)

The glorified outward appearance of the image depicts the power and character of world powers; however, their ultimate destruction demonstrates the lifeless and weak formation of any world governments. Being established on the dangerous foundation of clay and iron, the image does not have any strength or stability. This further depicts the weak establishments of world governments and the tendency for it tumble against stronger forces. Although individual materials of the image hold value, they cannot be mixed together to create coherence. Upon studying past kingdoms and present democratic governments, it can be said with certainty that political tension and a lack of unity is a critical fault in present world powers. Daniel furthered explains the meaning of the four parts of the image:

Golden Head represents the first established world power: the Babylon empire. Ancient Babylon can into being after the fall of Israel and it’s glory lasted 70 years from B.C. 606 – 536. The attractive and precious gold points to the splendour and wealth of Babylon accumulated by its great ruler, King Nebuchadnezzar. Nebuchadnezzar ruled Babylon as a powerful autocrat for 44 years till B.C. 562. His successors were weak and led lives of pleasure which ultimately lead to their demise. Belshazzar, Nebuchadnezzar’s grandson, was killed in the midst of a boisterous and drunken gathering in the palace when the Medo-Persian Kings came and took over the land.

The Chest and Arms of Silver illustrates the Medo-Persian empire which became powerful after the fall the of Babylonian empire. This empire lasted more than 200 years from B.C. 536 till 330. As silver is inferior to gold, Medo-Persian kings had less prosperity and splendour than the Babylonians, but they lasted longer and controlled more areas. Furthermore, gold symbolizes the authority of kings while silver represents the power of princes. The Medo-Persian empire was governed by coherent rule of assigned princes with a king as an overseer. The picture of two hands depicts the joint authority of Medes and Persia. When Cyrus and the Persian king Darius (Cyrus’s father-in-law) conquered Babylon in B.C. 536, they consented upon joint rule. However, as Cyrus became increasingly engaged with matters of war, he appointed Darius to be governor of Babylon. Two years later, when his father, Campia, died, Cyrus tool over control of the total empire. Cyrus was succeeded by 9 kings and the empire faded away with it’s last king: Darius III.

The Belly and Thighs of Bronze points to the Greek empire which became powerful from B.C. 331 to B.C. 63. In B.C. 331, Alexander the Great, a valiant man of war, conquered the Medo-Persian empire and established his kingdom. He became a feared and powerful emperor as he was able to conquer Persia, Egypt, Syria, Mesopotamia, Bactria, and the Punjab within a very short span of time. However, he greatly favoured his subjects, displaying great leniency towards the Jews. He built cities in all lands that he conquered and tried to teach Greek language to all people. When he died unexpectedly in B.C. 323, the kingdom as divided into four. Nevertheless, they stood strong as the most dominant powers of the world politically, socially, and culturally until the roman empire gained power. 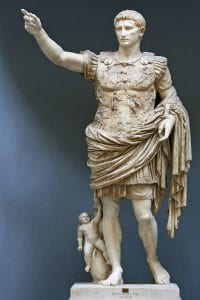 The Iron Legs represent the Roman empire which became powerful around B.C. 63. Rulers were all autocratic men from noble families who conducting strict administration without any leniency towards anyone. Rome was original known as ‘Roma’, a city founded by an Italian named Romulus in B.C. 758 on the banks of the Tyber River. As the city rulers became very powerful, they conquered more land and formed an empire. An army general named Pompy, who ruled from B.C. 86 to 48, subdued rebels and pirates and conquered Syria, Palestine and other middle eastern nations. Pompy was killed in B.C. 48 and Julius Caesar became the ruler. Julius Caesar was killed by Brutus in B.C. 44. Then Octavius (Caesar’s son-in-law), Mark Antony, and Lepidus ruled the empire together. Later, in B.C. 30, Octavius took the name of Augustus Caesar and assumed charge as the first emperor of Rome. Jesus Christ was born in Bethlehem during the reign of Augustus. In A.D. 364, as depicted by the two legs of the image, Rome was divided into Western and Eastern empires.

The Feet of Mixed Iron and Clay depict the democratic governments which come up after the fall of the Roman empire. Currently we are in this stage of world governance, as many countries around the world our adopting the democratic system.

A Stone Untouched by Hand proceeds out of the mountains and smashes the image. According to the interpretation of Daniel, the stone represents Jesus Christ who is to appear in the end times. The birth, life, death, and resurrection of Jesus Christ goes beyond the understandings of human intellect; therefore, His return will also be of similar fashion. All world powers will come to an end at the coming of Christ and He will establish His glorious kingdom in which we are the honourable members.

“The great God has shown the king what will take place in the future. The dream is true and its interpretation is trustworthy.” (Daniel 2:45 NIV)

The reason why the book of Daniel is so interesting is due to the parallel evidence we can draw from proved historical events. It is quite mesmerizing to unravel the depth of meaning hidden in the scriptures and come to understand that the recorded events continue to be fulfilled in this day and time. I had hoped to cover more from the book; however, it seems I have just managed to explain one chapter of the 12 chapters from the Book of Daniel. Perhaps I may continue on another post!

5 thoughts on “The Book of Daniel”