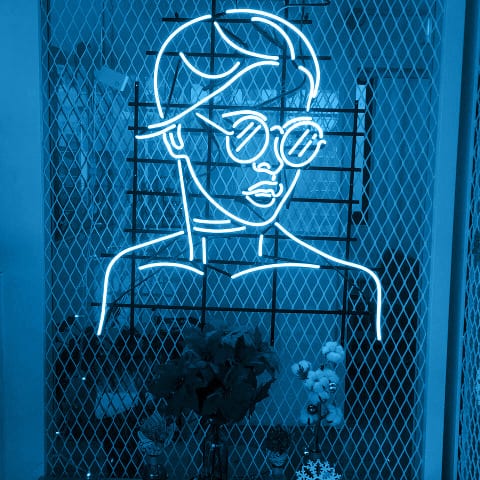 a reserved girl. Newly crowned with shiny, long, dark hair. Standing on wobbly legs, she poses in front of a dreary hospital – despite the circumstances, she almost looks cheerful with a small smirk forming on her lips. This young girls earliest memory was of the hospital; in those startling fluorescent lights, time becomes unidentifiable; the thin walls that constantly omitted others anguish – amplifying at night – almost as if the walls were more vulnerable in the dark; in a small girls eyes, even the hallways were too long of a distance to travel. “Weak” is how the doctors described her, physically unpromising and easily persuaded. But you see, that small smirk forming on her lips is a spark to the start of something strong and unbreakable.

For now, however, her dad is capturing this moment in time – counting up to three – that’s when he’ll click the shutter. In three counts, this is the world through her eyes:

the magical year when I was stolen from myself.

“What a foolish girl”,

“how dumb that you allowed others greedy eyes to steal something so vital.”

I didn’t allow them.

stealing my most valuable possessions;

managing to destroy my home from

Their eyes crawled up my spine

putting everything that was mine up for sale,

I am no garage sale.

But how do I tell them to stop

when the men before me

robbed my fellow sisters of the body they too

How do I tell you to stop

when your naked eyes can rip through my shirt and undress me?

I shiver at the thought of what your hands can do.

driving on the long, sharp roads

I felt like I saw the mountains for the first time.

Have you ever seen the way the majestic mountain tops glaze the clouds;

desperate to be a part of something higher than itself,

or is it the other way around?

The clouds long to be closer to the earth;

and the only way is for them to discretely kiss the mountain tops.

That is how I felt for the longest time,

but when my head was stuffed down a toilet;

puking out my anxiety

from finding out my health is failing;

whether I am slathered in makeup

or skin bare as the dessert,

my femininity and fragility

are not yours to construct.

Not free for your taking.

has always been mine.

I know not when I will go from this body,

but today is the day

Now, picture the same fragile girl turned into a mighty woman; newly crowned with the scars of her existence. No longer standing on wobbly legs, rather, her thighs are etched with lighting marks; a force of nature to be reckoned with. She once again poses in front of a vibrant hospital – despite the circumstances, her plump lips are parted into a wide grin – almost mockingly. Her earliest memory was of the hospital; however, those fluorescent lights no longer startle her, they are simply a necessity – to see; the sounds coming from the walls no longer disturb her for she can emphasize with the anguish; in a mighty woman’s eyes, the hallways are a short distance to travel compared to the distance she has had to endure in life. A “miracle” is how the doctors described her, physically defying all her odds and extremely headstrong. You can feel her strength omitting from this photograph. This photograph her father took many years ago, the beginning of her journey – a journey in three counts.

I feel like I owe a short explanation, for I have chosen a very abstract way to formulate this free choice blog. I begun and ended with a third person narrative, then in the middle, switching to first person when the characters father was counting up to three (in order to take her photo). I had hoped to capture the fluidity of her character evolution (reclaiming her own body even though she was diagnosed with a sickness that constituted an early death) through a static object – the photograph/her father’s counting. Hope you can find the method in the madness. 🙂