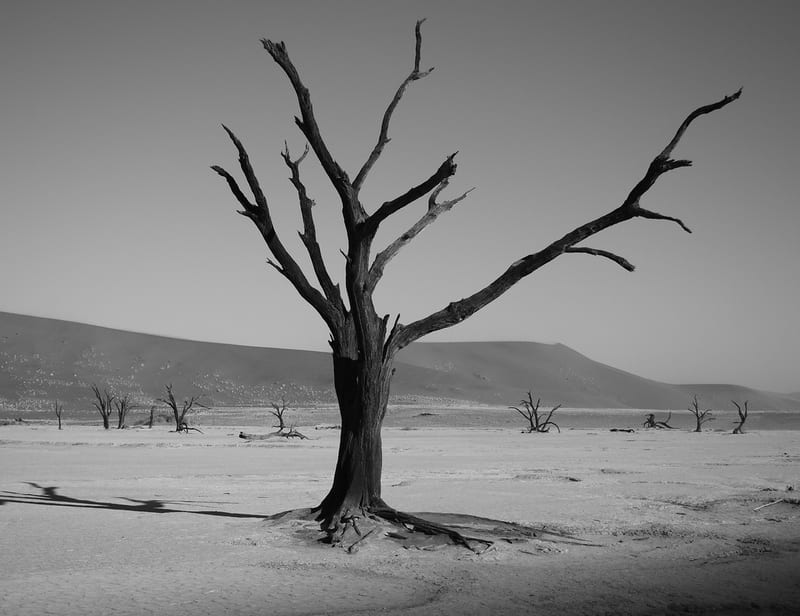 Our AP class had a short discussion the day before we went to the play about the possibility of a tree being involved in the set design – one of which resembles the tree associated with the play Waiting for Godot, written by Samuel Beckett. Walking into the theatre to watch Rosencrantz and Guildenstern are Dead, produced by the Shakespeare Company for the fall 2018 season, I was so excited to see the infamous barren tree centerstage. I could only wonder if this similarity was truly the set designer’s intention… I found a few similarities to the beginning of both Rosencrantz and Guildenstern are Dead and Waiting for Godot which I thought I would share.

Waiting for Godot begins with the two protagonists alone on stage, waiting for a man with the name of (surprise!) Godot to appear; they do not know, however, where or when they were supposed to meet the man. Sound familiar? The longer the two main characters, Vladimir and Estragon, are standing by the tree to wait for Godot, the more impatient they become. At one point, Estragon suggests to two hang themselves… While they do fortunately decide not to do so, it leads me to connect Rosencrantz and Guildenstern’s death to how Vladimir and Estragon could have died themselves… Does anyone know what the significance of this connection could be? I admit I was not able to come up with anything conclusive, so I would love to hear someone’s insight!

The protagonists of Waiting for Godot experience what is similar to a time loop – the same boy comes every evening and multiple times throughout the play to tell them Godot will not appear but surely tomorrow. By revealing this loop, we are shown the events of the play are not able to be controlled by its main characters, and no matter what happens, the boy always comes back while Godot does not. This gives the reader some insight into Vladimir and Estragon’s world, and how their story with Godot will not progress beyond the loop.

Whenever the tree was on stage for Rosencrantz and Guildenstern, it was as if the two main characters (played magnificently by two women) were locked in a mysterious world filled with a multitude of uncontrollable possibilities. Although the two were the main character’s of the play, they ultimately had no control over what happened – instead, Rosencrantz and Guildenstern simply had to wait. Just like Vladimir and Estragon.

Aside from similarities in terms of story between the two, including the set design of Waiting for Godot in the set design of Rosencrantz and Guildenstern establishes the connection between the world of Vladimir and Estragon and the world of Rosencrantz and Guildenstern. All four of these characters get locked in a circumstance they are unable to control for reasons they never discover, and all four of them rely on the appearance of others to move their story forward… It was, in my opinion, an incredibly smart choice to place the tree on stage at the beginning as it showed a thorough understanding of the script. It also exemplified that the Shakespeare Company makes a choice for everything – there is not one part of the play that is not thought through.