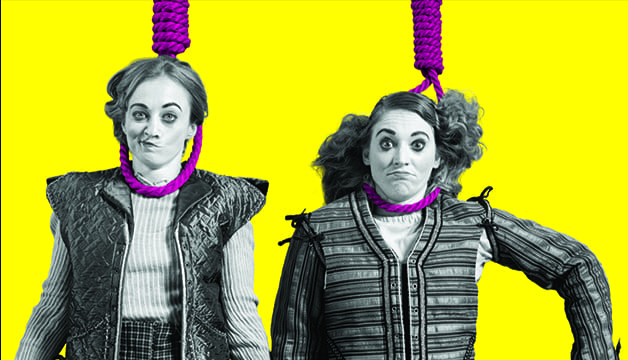 Death in literature is often presented as loud and glorious. It is dedicated to showing us the aftermath, or afterlife, of the the proverbial “next step”.  The sheer amount of variations on the hereafter could span text after text.

Rosencrantz and Guilderstern couldn’t shy away from the world-beyond-our-own any further.

Instead it focuses on how it’s author, Tom Stoppard, appears to translate death. As nothing.

“Death is the absence of presence,” is an overarching theme to show’s existentialist nature. Our protagonists can not picture a world outside the one they currently in habit. (read: the stage) They are physically incapable from leaving the stage, and get lost and confused when they attempt to. We, as the audience, are forced into the same confined perspective; we are never able to witness the backstage movements of the other characters. The contours for objects allude us if we have no prior reference for them, death being the shapeless item.It is as if all the other characters, other than Rosencrantz and Guildernstern, are privy to some higher power that allows them to move about the realms of on-and-off stage.  Much like an afterlife, after a character dies, the actor leaves and changes costumes, moving on to the next world. (or scene)

The only break in this set rule, the rule being that our protagonists can not leave our perceived reality of the stage,  is the titular death of Rosencrantz and Guilderstern. Here, instead of the loud,brash death that we expect from theater, we are given a quiet, subtle exit. Upon realizing their inevitable death, and after a brief discussion with the players, they depart. Rosencrantz leaves first, simply turning away from his friend and exiting. Guilderstern soon follows.  The only mention of their death is a throwaway line from the original Hamlet that makes it into the play. Then the audience leaves the auditorium, and Rosencrantz and Guildernstern’s absence is never reversed.