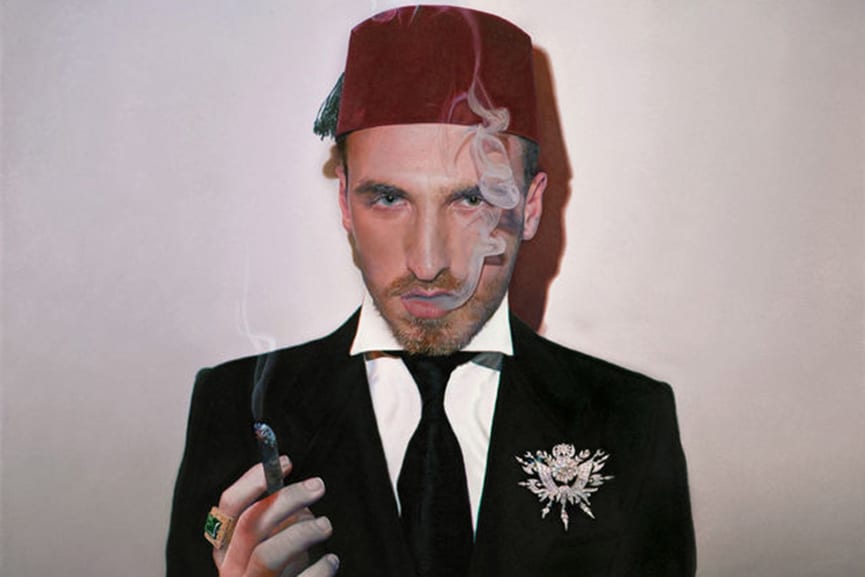 builders of the idea of turkish red

at a drinking table based on the

looking at the reds in Selçuki tiles crying

the manner of eating oysters & serving them

the entering to the salon & the use of napkins

entering the restaurant & picking a table

as I was thinking of these thoughts

thinking of an Azerbaijan girl

with her crescent and star earrings

I am building the

the lights of the bridge

reflections in the water

seeing the water as a necklace the bridge

like a Turk, red, I am crying turkish red

These are the first two verses of ten

Fear not! For the crimson flag that proudly waves in these dawns, shall never fade,

Before the last fiery hearth that is ablaze within my nation burns out.

And that, is the star of my nation, and it will forever shine;

It is mine; and solely belongs to my nation.

Frown not, I beseech you, oh thou coy crescent,

But smile upon my heroic nation! Why the anger, why the rage?

The blood we shed for you will not be worthy otherwise;

For freedom is the absolute right of my God-worshipping nation.

Discuss the idea(s) developed in your chosen text about how imagination affects an individual’s ability to embrace or reject an uncertain future.  (January 2017)

The anthem of a nation is intended to unify and encourage a sense of patriotism within citizens; when founded in an unpleasant version of the past many wish to forget, however, it may have the opposite impact. Lale Müldür, through her poem Turkish Red, establishes a new Turkish anthem. She reinvents the idea of what it means to be a Turk and what Turkish Red truly symbolizes after 70 years of the same, archaic understanding. She revolutionizes the symbols of Turkey and connects them to a beautiful, immersive culture, contrasted by the prior remembrances of death and bloodshed. Upon comparing the two it becomes evident, an anthem founded on harsh imaginings of war, killings, and heroism will likely leave citizens rejecting their uncertain future; the use of gentle, pleasant romanticizations, however, can inspire a sense of collective consciousness and patriotism: encouraging the acceptance of an unsure future.

Müldür’s establishment of a new anthem was a necessary step in the revitalization of Turkish pride as the old anthem proves obsolete. The anthem begins  “these dawns shall never fade” but, in a contemporary context, this proves untrue; it speaks of times “before” the loss of national power and glory but Müldür is in the aftermath wherein human rights are being disregarded (1&2, Marşi). Adhering to the current anthem would only further dissociate Turks from their nation. She begins her transition by creating a focus on the culture and people above a symbol. The Turkish anthem, as is, uses the phrase “crimson flag” (1, Marşi) which is immediately far more intense than “red” (4, Müldür) and, by having it placed first, creates a vivid, almost jarring, image of what it means to be a Turk. Müldür’s equivalent phrasing is “turkish red” (4, Müldür). It exemplifies the people, their language, and their culture by stating “ Turkish” first and simply using the gentle “red” to follow – indicative of her love for the Turkish people above the Turkish symbol of crimson.

Bold, alluring colours are more likely to capture our attention but gentle hues are more apt to keep it. So it is with Tukey’s anthem. The former anthem uses harsh descriptions to garner the attention of Turks but Müldür proves the superior efficacy of soft imaginings in creating a sense of community. Hence, she is able to support the notion that an anthem founded on the gentle imaginings of a nation’s culture, as opposed to vibrant romanticizations, is more capable of inspiring a nation to accept the uncertain future they are presented with as their fear of their future mirroring the harshness of their symbols is replaced with hope for a brighter future. A future wherein cultural values are not just noted but exemplified.

The poem creates a sense of unity between Turks that the former anthem disallows. The anthem creates an individualistic sense of possession over the nation with word choices such as “mine” and “my” but Müldür brings forth the notion that Turkey is ours. Immediately, she references “poets, dervishes, and wandering lovers” as those who make up Turkey. The “builders” (1, Müldür). To further emphasize her point, she places them all “at a drinking table”:  there will be no possession or division in the vision Müldür has for Turkey.

Her romantic view of Turkey’s people creates a deep sense of community effectively dispelling the feeling of possession that rugged fantasies imply.

The imagery used throughout the anthem is harsh and revolutionary and the description of Turkey’s star as a bright, eternal light greatly contrast Müldür’s approach. She uses imagery that is romantic as if the images themselves are rose-tinted: the star is described as jewelry giving it a gentle, alluring nature. The star and crescent of Turkey, to Müldür, adorn and beautify Turks rather than blinding all those who see them. Moreover, while the anthem uses a great amount of fire imagery – “abalze,” “firey,” “burns” – to imply a sort of refinement through fire and trials, Müldür contrasts this with water imagery (2, Marşi). She describes Turkey as gentle and free-flowing but still capable of the same refining qualities of fire without the cruelty.

When faced with the possibilities of fire or water, fire immediately creates a sense of fear surrounding the through of mayhem and destruction; water, on the other hand, inspires confidence through its life-bringing, cleansing nature. Müldür is not blind to our subconscious associations. Her intentional use of light, positively associated imagery, contrasted by the anthem’s imagery wherein gruesome fantasies are described, proves the glamourization of a nation’s culture, instead of its war-torn past, allow citizens to associate more positively with their nation as a whole; thus, inspiring the acceptance of an uncertain future.

Müldür, through her poem Turkish Red, creates a Turkish anthem that is able to serve its purpose. Through her use of mellow fantasies (as compared to the former anthem) about Turkish culture, the notion that imaginings founded in the culture and people of a nation have a greater impact than those founded on its jarring symbols and battles in encouraging the acceptance of an unsure future is perpetuated. Müldür redefines for all generations what Turkish red is and her fellow Turks are all finally able have a part of themselves incorporated.

Footnote: In spite of all the changes Müldür makes to the definition of Turkish pride and patriotism, there is one aspect she is unable to part with – Islam. Both the anthem and poem have star and crescent imagery and refer to the “God-worshipping nation” with pride. To be Turkish, regardless of the secular title, is to respect and understand the import of Islam. It is on this very point that she is able to bring together all members of her audience and create a deeper sense of unity among readers: Turks young and old are able to find a great sense of understanding in Müldür’s poem.