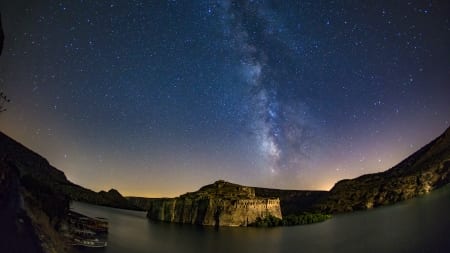 * Below is my personal response to the Turkish Poetry Seminar that I did with Ibukun. I chose to analyze the historical, current, and religious significance of the Euphrates River (as referenced in line 13) to our chosen poem under a diploma prompt (I structured it loosely like a rhetorical analysis).

builders of the idea of turkish red

at a drinking table based on the

looking at the reds in Selçuki tiles crying

the manner of eating oysters & serving them

the entering to the salon & the use of napkins

entering the restaurant & picking a table

as I was thinking of these thoughts

thinking of an Azerbaijan girl

with her crescent and star earrings

I am building the

the lights of the bridge

reflections in the water

seeing the water as a necklace the bridge

like a Turk, red, I am crying turkish red

Discuss the idea(s) developed in your chosen text about how imagination affects an individual’s ability to embrace or reject an uncertain future.  (January 2017)

turkish red in Relation to the Euphrates River

When an initially prosperous nation experiences a fall from grace, those associated with the nation often cultivate, and rely on, imaginative ideals of the past in order to restore a sense of glory and certainty to the future of said nation – in this regard, imaginative ideals act as a mannerism in which to escape the state of  a fallen nation, while simultaneously imbuing a responsibility of the native individuals to actively pursue a future parallel to past successes. Efforts inspired by this imaginative invocation, as well as the dependence on a romanticized past, are exemplified through contemporary Turkish poet Lale Muldur in her nationalistic poem turkish red. Through utilizing the multiplicities in the interpretations of the Euphrates river, in its historical and religious connotations, Muldur is able to mirror the past, though subsiding, glory of her nation – Turkey – with the sublimity, and current drying up, of the Euphrates river. Such interpretations of, and parallels with, the Euphrates river act to reinforce the strong image of the Turkish nation that Muldur creates within turkish red  – an image dependent so heavily on past merit, to the point of glorification, that it can do nothing but stimulate a collective desire to develop a future resembling an esteemed past. Within its references in both the Bible and the Islamic faith, the Euphrates river is portrayed as a sort of utopia. Biblical analysis concludes that the location of the Garden of Eden may be the Euphrates river itself, while the Prophet Muhammad parallels these ideas – his hadiths refer directly to the river as “Paradise,” a source of “treasures” and “Allah’s mercy.” Such associations of “paradise” with the river are further demonstrated through historical context as well. The Euphrates river provided the sustenance, with its abundance of water, for the first successful civilizations – those from the fourth millennium B.C.E onwards. On the river’s embankments, ancient cities – for instance Mari, Sippar, and Nippur – flourished. Empires, such as those of Babylonia and Assyria, were formed within the river valley of Euphrates, empires like that of the Ottomans: those who initially ruled Turkey. In this regard,the Euphrates river, in its religious and historical connotations, is glorious, and therefore carries with it a sense of certainty. This certainty can be translated to the manner in which Muldur describes the “ancient times” (3) of Turkey;  the establishment of her nation’s past as “refine[ed]” (4) and esteemed is enforced through the use of allusions to, and correlated imaginative ideals of, “Euphrates nights” (13) – by likening Turkey’s past to the ethereal, life- giving nature of the Euphrates river, Turkey is effectively elevated to a state of divinity, of paradise. It is through this imaginative perception of Turkey that a collective consciousness is created within Muldur’s poem, one in which the evident past certainty and sublimity of a nation acts to provide the foundation onto which the future of a fallen nation may be restored.

Starkly contrasting these ideals of paradise, however, is the reality of the Euphrates river, and likewise, the reality of Turkey in 1991, the time in which turkish red was written. Present day, the Euphrates river bears only a resemblance to the once powerful waterway it initially was – the beds of the river, drying up, unearth a barren, desolate landscape contradictory to the paradise it formerly was, the prosperity it used to provide – the certainty in the river, provided by its glory, has diminished. In spite of this, past conceptions of the river, based on the glorified image of the river that is weaved throughout religious texts, acts to invoke a predetermined certainty in what the river will become for religious followers. As read in the hadiths, the Prophet Muhammad said: “The Euphrates reveals the treasures within itself. Whoever sees it should not take anything from it,” (Al-Muttaqi al-Hindi, Al-Burhan fi `Alamat al-Mahdi Akhir az-Zaman, p. 28) such treasures referring to a “mountain of gold.” (Sunan Abi Da’ud) – the idea that the maintenance and restoration of its glory is inevitable is consequently created. In essence, despite the fact that the river is drying up and losing that which gave it its glory and certainty, the previously established glory of the river (in religious texts) acts as a catalyst to develop said lost glory into redemption. This can be related to the fall from grace that Turkey experiences in 1991 – a time of civil and political unrest in the nation, a time in which the glory of the nation was lacking, therefore signifying the degradation that Turkey has undergone. In the same manner that a reliance on religion acts to perpetuate an unfaltering image of the Euphrates river, by which an unrelenting belief in and devotion to the paradise of the river is evident, Muldur utilizes a glorification of the past, through comparing her nation to that of a grand quality and virtue, like the Euphrates river, to incite a responsibility of redemption within her nation by acting on the aforementioned collective consciousness – a consciousness established on imaginative ideals of Turkey’s past that invokes a responsibility of the nation to restore their lost glory and, accordingly, certainty.

Often times, uncertainty in a nation’s future, resulting from a degradation based on past successes, prompts fearful affiliations with said future. Proceeding this, a dependence on the imaginative ideals of one’s nation – that of its exceptional past – is used to dissuade such notions of uncertainty. It is through the development of these imaginative ideals that a collective responsibility is created: with such reliance on and inspiration from a certain, glorified past, nations facing uncertainty in their future attempt restoration by way of  mirroring the certainty found in their idolized past. As evidenced through nationalistic poem turkish red, as written by contemporary Turkish poet Lale Muldur, the creation of imaginative ideals regarding one’s fallen nation are pertinent to securing a certain future, using a glorified past as the standard for redemption. Through applying the religious and historical implications of the Euphrates river as a comparison to Turkey itself, Muldur creates this romanticized and flourishing image of her nation’s past, through which she instills a national responsibility of redemption into her fellow Turks. By virtue of imagination – the act of being resourceful, while subsequently inspiring – fallen nations are able to redeem lost senses of glory; the foundation of certainty within a nation’s  future is established within the glorification and prosperity of said nation’s past.

Metzorah: In Search of Eden