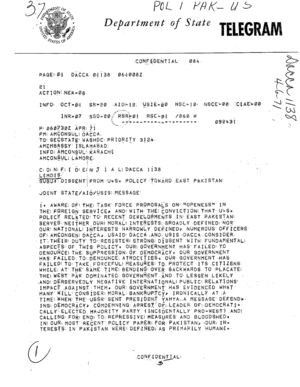 The following is an emulation of the Blood telegram as a speech.

What do these texts suggest about the interplay between empathy and self-interest?What  (2015)

When ultranationalism and pride blinds a sense of humanity for a group, compassion and empathy are lost in ambition and in its place scapegoating and demonization are created to justify immoral actions.

I am utterly disgusted at the atrocities that have transpired at this point in history. Our great leaders that we have elected today have acquiesced to gross extend and condone behind closed doors injustices that occur as I speak. They tell us lies that the world is a safe and beautiful place, and they are not wrong, for our world is a safe and beautiful place, however at the expense of others. What our leaders will tell you is that our nation is great and prosperous, and now is the time for us to make further advancements in our era of greatness. Yet what they will ignore is how we have brought upon that era. Ladies and gentlemen, halfway across the world I have witnessed firsthand the compromisation of the morals that our constitution holds so sacred by the very people who claim to love and serve our homeland. They practice brutality only capable of savages of a time now passed.

Now you may wonder where my evidence is? For all the telegrams and news we have received from East Pakistan claim that America is helping the nation. My fellow Americans, I have come to tell you that that is in fact not correct. We have practiced Genocide, and actively disapprove and antagonize of a regime that idealizes democracy and liberty, while supporting one of dictatorship and tyranny. My fellow Americans, think to yourself, would Presidents of the past approve of Nixon’s actions? All of the information that we receive from East Pakistan has been either written by and authorized by American personal or those approved by, Including myself. Yet I have chosen to be the individual who speaks out against the injustices. As I have witnessed first hand the second holocaust, yet this time, we are the Nazis that you have once despised.

Had any of these men been alive today they would weep for our nation. They would weep knowing that the efforts of their endeavours have just been forsaken and compromised.

Wake up, know the injustices against humanities that we are committing, that we have scorned the germans for.

Have we become hypocrites?

So I ask you, I request of you, Show president Nixon how American you are and show your care and concern for the world, for if we are a nation as great as we claim to be, then it is our duty to extend such greatness to others as we have done in the last war.