How do we move forward?

Where are your fortune and fame, freedom and virtue of old?

All things on earth are transient: the days of your greatness and glory

flicker like flames in the night, far in the depths of the past.

Comely and fair was the country, crested with snow-covered glaciers,

over the sea from the east, eager to settle the land.

Raising their families on farms in the flowering laps of the valleys,

hearty and happy they lived, hugely content with their lot.

Up on the outcrops of lava where Axe River plummets forever

into the Almanna Gorge, Althing convened every year.

There lay old Þorgeir, thoughtfully charting our change of religion.

Heroes rode through the regions, and under the crags on the coastline

O it is bitter to stand here stalled and penned in the present!

Men full of sloth and asleep simply drop out of the race!

How have we treated our treasure during these six hundred summers?

Have we trod promising paths, progress and virtue our goal?

Comely and fair is the country, crested with snow-covered glaciers,

Ah! but up on the lava where Axe River plummets forever

into the Almanna Gorge, Althing is vanished and gone.

Snorri’s old site is a sheep-pen; the Law Rock is hidden in heather,

blue with the berries that make boys — and the ravens — a feast.

Oh you children of Iceland, old and young men together!

See how your forefathers’ fame faltered — and passed from the earth!

Comforted by the warm mist of the past, it proves extremely difficult for an individual to find the strength or will within themselves to move past the transient victories of their ancestors and pave the way to a new future having to bear the harsh winds or burning flames to be faced. Iceland’s several-century-long battle for independence follows suit as the memories of former victories allowed them to be blind to the cruel reality of the oppression they were enduring. Jónas Hallgrímsson’s Island acts as a guiding hand gently pulling Icelanders from the entrancing haze of their past and shows them the possibilities the future has in store if they are willing to allow their past to act as a motivation, instead of a hindrance. Through this, he is able to exemplify the notion that when individuals are able to find a sense of comfort and victory in the past they are bound to look upon it with fond remembrance corrupting their sense of reality; however, when looked upon in hopes of inspiring positive efforts in their present change is able to be made.

Hallgrímsson begins by immediately addressing Iceland’s rich, successful past as a means of capturing the attention of his audience. When he states “Where are your fortune and fame, freedom and virtue of old?” he is keenly aware of his audience and their fondness of the past; hence, using the thing they love against them as a means of questioning their inaction. Furthermore, his choice to continue by writing, “the days of your greatness and glory/ flicker like flames in the night, far in the depths of the past.” he forces Icelanders to realize the inconsistency and “transient” nature of the past upon which their hope resides. Their blindness as a result of the shroud the past has created over them is comparable to a “flame in the night” as although they are being consumed by darkness the only thing they see is the flame – to them a sense of hope; in reality, a distraction.

Steam has an innately calming quality about it. Its combination of heat and ice allows it to be the perfect middle ground between two extremes and so it was with the people of Iceland. Having been colonized since 1262 they allowed themselves to peacefully acquiesce to being traded about between Norway and Denmark more so like cattle and less so like people with a distinctive culture. As addressed in the poem, they were able to live impoverished under the control of the Danes due to the hope they found in the “flame”. They were so determined to focus of the past when their ancestors were capable of living in the extremes – as seen in the Sturlung Age – that they had no motivation to act in order to restore their previously independent and prosperous land.

Island’s continuation act as a call to action as Hallgrímsson entices Icelanders by comparing the beauty and bounty Iceland once had to the tragic state it was in presently – contorting their mist like fascination with the past into a motivation for their future. When he states, “O it is bitter to stand here stalled and penned in the present!/Men full of sloth and asleep simply drop out of the race!” he, in essence, begins to critic the character of Icelanders as they are too lazy to put in the necessary work to attain their independence. As a result of their inaction, they left themselves “penned” by their oppressors and “stalled” in the present as Icelandic history failed to progress. His last lines of “Oh you children of Iceland, old and young men together!/ See how your forefathers’ fame faltered” acts as his final implicit call to action as he, at this point in the poem, has developed and contorted their love of the past into a source of shame as a result of their comfort in the middle ground.

Though they have yet to return to the severe extremes of the Sturlung age, the necessity of Island was nationally received and understood; ’twas able to incite attempts at self-determination. Icelanders were finally able to realize that the steam they were able to once find comfort in was, in actuality, trapping them in their past and inhibiting their future. Once their fascination with and entrapment by the mist was overcome, a hard-fought battle on its own, Icelanders were not only able to move forward to determine their own identity and sense of nationalism but were able to maintain a great deal of Norse culture as a result of the amount of time they spent immersed in it. This is evident as seen June 17, 1944, when Iceland, with 98.4% voter turnout and 98% in favour of independence, was declared independent yet again.

An intangible sensation of security is easily brought about if one allows themselves to be comforted by the past as these ephemeral comforts as capable of disguising the shortcomings of a nation. As seen in  Jónas Hallgrímsson’s Island, in relation to Iceland’s fight for independence, it is evident that allowing oneself to be eased by the past weakens one’s determination. However, if that fascination with the past is allowed to be contorted into motivation for a brighter future, individuals are bound to act. Stepping out of the cooling warmth of the steam into the brutal elements ahead. 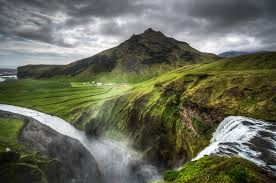 Get it, ’cause land of fire and ice? Fire and ice make steam?

*Philip Chbeeb is an amazing choreographer and dancer (and, evidently, small-time poet); I implore you to spend a solid five minutes of your day watching any of his pieces. As of right now, I am loving Voyeur – https://goo.gl/cqZpBL

Credit Where Credit Is Due: