This is my personal response to the cultural seminar my group did (or will present in January) on Icelandic Independence. I chose to analyze the poem we had used in our presentation under the lens of a diploma prompt. The link to our presentation, in which the poem can be found, is as follows: https://docs.google.com/presentation/d/1ksQLIvMf0kNxYI7ePU0ZlBZl1sc7sbAVsI-J541wOJ0/edit?usp=sharing

A Literary Analysis of Ísland in relation to Icelandic Independence

When a repressed nation seeks liberation, they must first undergo collective cultural readjustment so as to promote national consciousness. Efforts to do so are centred around the flourishing social and political life of said nation in the past – the use of national commonalities, specifically the personification and symbolism of a nation’s land, allusions to the nation’s past, and rhetorical questions to invoke action and reflection develop this consciousness, as evident through Jonas Hallgrimsson’s nationalistic poem Ísland. Although Hallgrimsson was not alive during the true liberation of Iceland, his influence can be felt throughout the relentless fight for, and lasting independence, of Iceland. Ísland provides insight into this influence and the readjustment of the Icelandic culture, shifting more into a realization and appreciation of the past to promote a national consciousness in order to achieve Icelandic independence.

Through the use of imagery, Hallgrimsson utilizes a source of national pride – the Icelandic landscape, the vast, everlasting nature of Iceland acting as a symbol to preserve it’s future of liberation in a past of freedom – to invoke a sense of gratitude and nationalism. By likening Iceland to “Our beautiful,/bountiful mother,” the land is seen to provide all that the nation needs – no external influences are necessary, rather they taint the integrity of Iceland and its potential. References to the past, in regards to the scenery,  also aim to restore Iceland’s former glory: “the/ days of your greatness and glory/ flicker like flames in the night, far in the/ depths of the past,” used in conjunction with the “[c]omely and fair was the country,/crestes with snow- covered glaciers,/ azure and empty the sky, ocean/ resplendently bright,” depicts Iceland’s fall from greatness. While the land itself has not changed, the appreciation and unity that the land used to provide is evident. As Iceland lost its sovereignty as a country, it also lost the potential its people had, given to them by the land – “[r]aising their families on farms in the/ lowering laps of the valleys,” the vikings that originally inhabited Iceland were able to flourish, their success and achievement derived from the land itself. As such, the use of imagery of the Icelandic land invokes the need to reclaim said land for the Icelander’s themselves; the potential of the land, and therefore the people, acts as a driving force to promote nationalism. Through this, a national consciousness is created, as is the revitalization of the Icelandic culture – they will be dominated no longer, aware and appreciative of the potential of their motherland.

Moreover, allusions to the Icelandic sagas, vikings, and chieftains further invokes nationalism and the need to act on said nationalism through their connections to Iceland’s free and prosperous past. The vikings, as previously mentioned in the utilization of the land, not only refer to the past, but also to the building of a free, self sufficient nation, as Hallgrimsson writes, “[h]ere came our famous forebears, the/ freedom – worshipping heroes.” Through describing the vikings as “heroes,” they are portrayed as, not relics of the past, but the foundation onto which a past Iceland, and a new free Iceland can and should be formed. Allusions to the Icelandic sagas, national pieces of Icelandic literature that told of the realistic daily lives Icelandic farmers and their feuds, are further indicative of this call to act on the potential of the Icelandic nation. “[T]here strode Gissur and Geir, Gunnar/ and Hedinn and Njall,” names of Icelandic saga characters, showcases this, as does the question “[h]ow have we treated our treasure/ during these six hundred summers,” the six hundred summers in reference to the six hundred years past since the writing of the sagas. Through using the sagas to reference key differences in how Iceland has been “treated” in the past and under Norway and then Denmark’s rule, it is apparent that Hallgrimsson, through allusions in his poem Ísland, is stating the lack of proper and fulfillung action of the Icelandic people who are inherently – as evident through the reference to the vikings – “freedom – worshipping. ” Thus, the use of allusions to past times and people of great influence in the initial prosperity and liberation of the nation of Iceland acts to change the way in which Icelanders view themselves, ultimately promoting nationalism and a refined sense of their culture – revitalization due to glorification of the past.

Lastly, the use of rhetorical questions, or erotesis, in Ísland intends to address the Icelander’s lacking initiative in regards to their treatment and value of their own nation, as compared to its value and how it flourished in the past. When using “[h]ow have we treated our treasure/ during these six hundred summers,” and “[h]ave we trod promising paths, progress/ and virtue our goal,” together, Hallgrimsson effectively indicates the shortcomings in Iceland’s “goal.”  Through glorifying the past, and what it meant to be an Icelander in the past, these rhetorical questions serve to enforce a new national mindset and culture, one reliant on the freedom and wealth of Iceland as a self sufficient nation as seen in the past. As a result, the rhetorical questions invoke the same response in all Icelanders, thus prompting action from the Icelander’s to reclaim “progress and virtue” within their nation. Under the control of external influences at this time, there is only one manner in which to achieve this – liberation from the control of the dominant nation. It can therefore be determined that, when used in relation to imagery and allusions to the past, rhetorical question as seen in Ísland can act to further reinforce and reintegrate ideas and values of freedom, thus leading to action in favour of freedom.

As a repressed nation, such as Iceland, seeks to restore its former glory and freedom, it must first revitalize its culture and nation people so as to create a national consciousness by which all action is prompted. In order to do this, a foundation on which said national consciousness must be developed through glorifying the nations free and wealthy past. This is evident through the use of imagery of a nation’s land, allusions to pivotal character in the nation’s past, and rhetorical questions serving to enforce the unified mindset presented, as showcased by Jonas Hallgrimsson’s nationalistic poem Ísland. Through utilizing these literary devices to promote ideas and values that aligned with that of a past, a free Iceland, Hallgrimsson was able to provide the ignition for a long, relentless, and eventually successful fight for liberation from the Danes. Hence, when a nation seeks to gain independence, glorification and reliance on the ideas and values of a free past are intrinsical to the ability to act on such desires and the effect of those actions, without which, liberation is inconceivable. 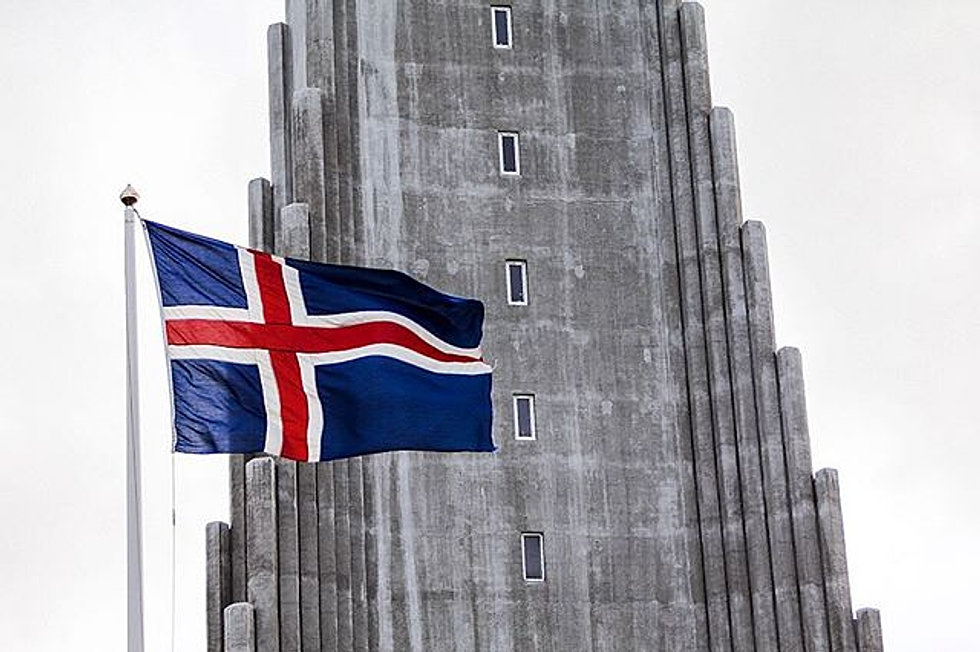