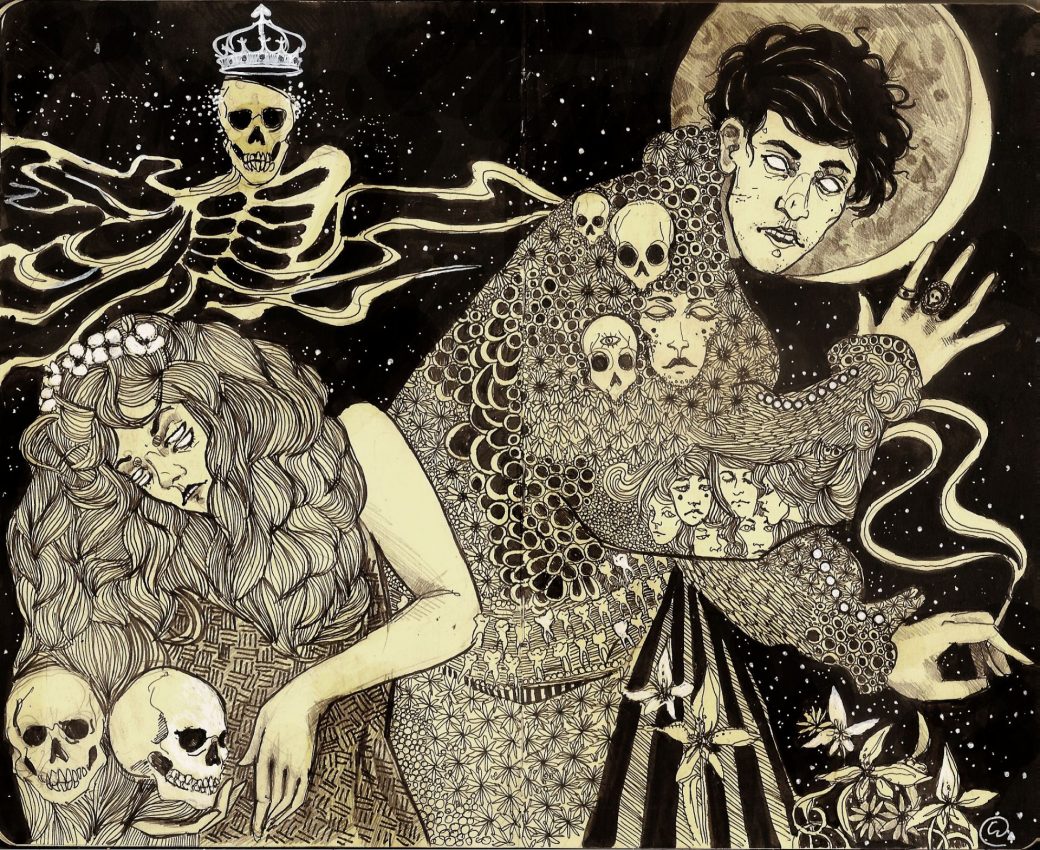 Disrupted Psyche: A Psychological Analysis of Hamlet in Shakespeare’s Hamlet

The ways in which an individual struggles to restore honour and

Consumed by one’s attempt at the restoration of honour and certainty, the greatest struggle one faces is the preservation of the mind. This notion is proven true in William Shakespeare’s Hamlet as the eponymous tragic hero is, in essence, pressured by the ghost of his father to act on his behalf; with this mindset, Hamlet is able to manipulate his hateful, sinful thoughts and deeds into seemingly noble and just ones as he deems them necessary elements in the restoration of balance within Denmark. The nobility found through his actions is short-lived as his pursuit to act on behalf of his father becomes an obsession and, ultimately, results in his untimely death. It is evident that Hamlet’s obsession corrupted his psychological state, thus, resulting in his self-loathing. Said feelings lend to his inconsiderate actions as he was willing to take any means necessary in order to dispel his undesirable thoughts. With this, Shakespeare is able to reveal as an individual ventures on a quest they view as noble in order to reinstate honour by dispelling a false sense of certainty their pursuit may quickly become an obsession; thus, overtaking their life – detrimentally impacting their psyche.

When guided by the will of others, one may allow their ambition to develop into obsession, quickly overtaking one’s sense of self-control and morality – the same is true for Hamlet. His transformation of his father’s seemingly divine “commandment” from ambition into mind consuming obsession is most evident when he states, “ I’ll wipe away all trivial fond records,/ All saws of books, all forms, all pressures past/… And thy commandment all alone shall live”(1.5, 100-101, 103). The mission begins as an honourable pursuit of vengeance; proving paradoxical, however, as vengeance is to be left to God and is not the responsibility of man – a virtue greatly honoured at the time due to fear of a sinful life damning one for eternity. Knowing this, Hamlet is still able to convince himself that his goal to murder Claudius is one to be respected, as not only was it incited by the ghost of his father but, when completed, will restore honour to the crown of Denmark by discontinuing the false sense of certainty surrounding the death of King Hamlet. This serves as evidence of Hamlet’s psychological decline, supported by cognitive behavioural therapy[1], as his obsessive thoughts of his father’s command resulted in continual feelings of inadequacy – corrupting his self-perception. The detrimental psychological impact of Hamlet’s once admirable mission, now an obsession, on his mind is epitomized in his fits of self-deprecation wherein he refers to himself as a “rogue and peasant slave” (2.2, 509). His loss of self-respect and transition into self-loathing is evident as he disregards his birthright as prince and bears the title of “peasant”. Ergo, through Hamlet’s struggle with the command the ghost of his father gave, dehumanizing himself as a result, it is apparent that if an individual is incautious as they attempt to reintroduce certainty in order to restore honour they leave themself vulnerable to corruption at the hand of their ambition; hence, resulting in feelings of mediocrity and hatred of one’s self – psychological torment.

Obsession continues to prove itself the antithesis of sound judgement as Hamlet continues to struggle with his goal and willingly relinquishes his former lifestyle by feigning insanity, thus, forcing himself into a state of isolation. In said state, his psyche is forced to suffer further as a result of his pursuit. Though Hamlet’s noble quest for vengeance was paradoxical from the onset, the further he progressed into it, his discernment grew increasingly clouded until he became apathetic to the impact his actions were having on those he loved. This is most evident as Hamlet suddenly switches from referring to Ophelia – his love interest – as“The fair Ophelia!—Nymph” to chastising her when he says, “You should not have believed me, for virtue cannot so inoculate our old stock but we shall relish of it. I loved you not.” (3.1, 90, 119-121). He disregards his true feelings for her, thinking she is a beautiful woman, and maliciously berates her saying that regardless of her efforts she will never be virtuous and that he never loved her in order to do what he feels he must to restore honour to the crown of Denmark. Through this decision, Hamlet, in effect, begins to emotionally abuse Ophelia – lovestruck and hopelessly devoted to him – as he fails to consider the emotional impact his false insanity would have on her as her feelings developed for him – putting her sanity in jeopardy also. Through this, Shakespeare is able to reveal the impact of an individual’s pursuit of honour and certainty as initially harmful to them and then to those who care for them. Thus, as one attempts to restore honour, the certainty of who one is, truly, is lost for loved ones as well as one’s self. Not only does he abuse Ophelia by using her to perpetuate the notion that he is insane, but he also disregards his own emotions for her and sets in motion a pattern of emotional masochism as he is no longer able to be honest with those he cares for or himself. Thus, Hamlet’s struggle to restore honour by dispelling false certainty, in effect, strips both Ophelia and him of their senses of dignity and respect. Therefore, as a result of Hamlet’s self-loathing feelings, his actions were hasty and meagerly thought of, causing harm to those who loved him most. This progression through Hamlet’s psyche proves as an individual seeks to restore honour and introduce certainty, a battle of self-loathing sets in making them apathetic to their influence on others.

Obsession, stirred on by grief, has the capacity to drive individuals to speak irrationally without consideration for their capabilities at the expense of their sanity. Just is the case with Hamlet as his obsession with his father’s command to avenge his death motivated him to speak boldly and eccentrically of the endless challenges he would face in order to reveal the truth of his father’s murder. Most evident when he exclaims, “Oh, from this time forth,/My thoughts be bloody, or be nothing worth!” as Hamlet is so determined to restore honour that he is willing to consume his minds with solely morbid thoughts from then on as a source of motivation (4.4, 65-66). Through such extravagant promises, Hamlet believed he would be able to restore honour to the crown of Denmark which bitterly did not come to pass as his words were not enough to evoke action. His wild utterances go to serve as further evidence of his cognitive behavioural progression as his thoughts of urgency regarding his father’s command led to feelings of panic, thus, resulting in his spewing of empty promises regarding what he would do. Ergo, when thought did not lend to action, Hamlet’s ego was left tattered and, consequently, his obsession altered to fit the needs of his bruised ego. Thus, furthering his psychological decline as Hamlet’s feeling of inadequacy and panic were motivators of his misguided decision to compete against Laertes in hopes of restoring the honour and pride he lost in himself during his quest to disprove the false sense of certainty surrounding his father’s death. This done besides the fact that there was an obvious risk in fencing Laertes – the better swordsman and grief-stricken brother of his ex-lover, Ophelia – proving his need for validation outweighed sensibility. Through Hamlet’s efforts at self-redemption, Shakespeare is able to exemplify an individual determined to restore a lost or skewed sense of honour and certainty leaves their pride vulnerable to the “whips and scorns” of their own inaction. This, as a result, leaves the individual aching for redemption at times in manners unbecoming of their better judgement. Moreover, with Hamlet’s last words, ”If thou didst ever hold me in thy heart/…tell my story,” it is clear that the once enticing argument that drove an individual to action becomes the same argument used to ensure that their quest to restore honour and dispel a false sense of certainty does not end as their life did – in vain (5.2, 344, 347). Considering this, it becomes evident that an individual whose ego has been marred by their obsessive quest to restore honour and certainty ultimately loses whatever sense of honour they had within themselves; hence, they are increasingly willing to take on unrealistic challenges in hopes of restoring the respect they lost for themselves.

Hamlet – a character dripping with grief and ambition – when moulded by Shakespeare and interpreted by readers, becomes a symbol of and caution against the internally destructive forces of obsession. Throughout Hamlet, the interplay between his thoughts, feeling, and actions serves as evidence that an obsessive individual, when venturing on a quest to restore honour by dispelling a false sense of certainty, quickly becomes vulnerable to their own corruption as their psychological state of being declines as a result of prolonged struggling.

[1] Cognitive behavioural therapy suggests that an individual’s thoughts, feelings, and actions are all interconnected – portrayed in the shape of a triangle. This is to say that if an individual continually thinks they are not going to complete a task, they may begin to feel inadequate and their actions will reflect said feelings.

Concepts and ideas inspired, in part, by: Ojo, Ibukun, and Tecson, Jieo. “Ham-Let Me Reveal The Cowards Within Us All (Jieo& Ibukun).”Hunni AP, 5 Dec. 2017, aphunniblog.edublogs.org/2017/11/19/ham-let-me-reveal-the-cowards-within-us-all.

(more) Credit Where Credit Is Due: