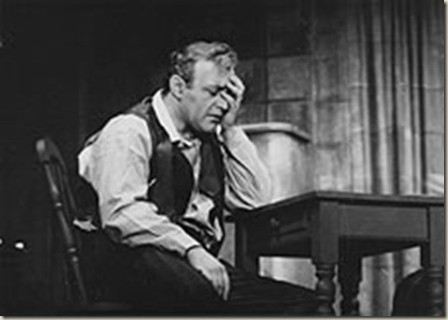 After a first-time read through Arthur Miller’s play, Death of a Salesman, it is easy to simply see the book as the story of an old geezer trying to live vicariously through one of his sons. In this sense, you are correct, but not enough credit is given to the character of William, or Willy, Loman. Though a very troubled and delusional individual, the character of Willy Loman is not one to simply be labelled as an old fart with a bad memory and a worse temperament. After reading the book out loud in character (and almost losing my voice), I believe there is so much more to be had from Willy from a humanist perspective.

I beseech that you look to the past of Willy Loman, and analyze the events and his motivations not from a standpoint of an audience member reading a book or watching a play, but as a human thrown into this story. Place yourself under the circumstances of the fictitious individuals to reveal the very real and human conditions they act under. This holds true for Willy Loman. To begin, look at his origin. The seemingly wealthy and successful father of William and his brother, Ben, passes away, leaving the two young men without an inkling of what should be done to achieve the aforementioned success.This drives the two brothers in very different directions: Ben goes to Africa and becomes affluent from diamond mining, while Willy becomes a travelling salesman. The disparity between the two characters is immediately present, as these two occupations vary greatly. Imagine if a relative of yours was to become largely successful and wealthy, whilst you were suffering in both of these aspects. Would you not be instilled with jealousy, and a lack of self confidence? Or perhaps a sense of self righteous pride with a dash misplaced hope peppered on, creating a cocktail of easy agitation and a what-the-hell-is-your-problem attitude? If you perpetuate these feelings for years, your outcome is a curmudgeon like Willy Loman.

Next, take into account that Willy is a liar. He subconsciously lies to himself and others regularly, as since he cannot actually obtain a successful image, he makes it up. It was once said that the greatest of liars can convince themselves, and this demonstrates William’s delusion. In literature, it seems abundant that individuals who dislike their reality will rely upon an imaginary or unattainable one for resolution. Willy uses the unattainable past as his escape.

“Why can’t Willy just support what his son wants to do?! Why can’t he stop being a wrinkly jerk who only cares about money?” you say as you mope about how he’s supposed to be like Scrooge (cause apparently all middle-upper class men in literature are money and power hungry old white geezers).

I understand your issue, but honestly that seems as poor an excuse for a character’s actions as the idea of Deus Ex Machina. Once again, put yourself into his footsteps and his circumstances. As a 63 year old, hard working guy who is considered a failure, would you really want to live in a place where your dreams never see fruition, or would you rather be in a place where you did succeed? That is the conundrum of reality versus imagination, as both are consuming for their own reasons. If they are not balanced, then one will chow down on everything that is you. In Willy’s case, his reality crushes the scale. Picture Willy in the center of a scale, where one arm is labelled reality, while the other is labelled imagination. As his reality becomes more daunting, it shifts the balance, making the imagination side lighter and higher up. Like a slide, Willy slowly slides down into the gaping maw of reality, clinging to whatever memories and imagination fall his way, until finally he is consumed along with his mental health.

“You end up worth more dead than alive.” These words resonated with Willy in the end, when his imaginary ghost advisor of his brother almost coaxes him into suicide. In the end, he could not find worth in his life, perhaps in death some light could be shone on this. In the end, Willy was more than a lost old man. He was someone who struggled his entire life just to find out what it meant to be a success. He tried to follow in footsteps that weren’t his, and he tried his own path too.  At the end of the day, Willy was the most human of many people; existing in the midst of the question: Why?

One thought on “William Loman: A Small Analysis”