‘Cause what could be more satisfying than to be able to go, at the age of eighty-four, into twenty or thirty different cities, and pick up a phone, and be remembered and loved and helped by so many different people… he died the death of a salesman… hundreds of salesman and buyers were at his funeral… Today it’s all cut and dried, and there’s no chance for bringing friendship to bear—or personality. You see what I mean? They don’t know me anymore.

The fate of one Willy Loman was set in stone and told from the beginning: through his relationships with those in his life, his decisions and, most prominently, in Arthur Miller’s choice of a title. It is from this title that readers will wonder what the death of a salesman exactly is and how Willy will reach this demise.

In the quote above, Willy describes what he believes to be the death of a salesman – dying with the strong relationships necessary to make successful sales and to feel fulfilled enough that death is not to be feared. Willy claims he has lost these relationships in his life and in turn, feels he will not be remembered and admired as a successful salesman.

A salesman’s job is to sell. The very foundation of this occupation is built on the influence of others. Without this, or a salesman whom lacks in his way with words, will not be able to sell and will not feel as if their job in life is complete. A salesman who isn’t able to sell isn’t a salesman at all; they are only just a man, and a failure at that.

It is almost every father’s dream to see their son succeed, especially when the son’s respect runs so deep they venture into the same line of work. While this is true, it is even more common for parents to want to see their children succeed in certain areas when they themselves hadn’t been able to in their own life.

As Willy’s career begins to dissipate and he has an affair, the man is swallowed by his failures. He turns to destructive habits, devastating his life (and those around him) even further. While not explicitly stated, Willy is a father who only wants the best for his family. If Willy cannot make any sales, why not sell the idea of being a salesman to his son? What could be a better way to provide for his family and be successful as a salesman? No matter how much of a failure Willy may be, he still has a son who he can influence to succeed in his stead.

This is to be Willy’s final sale!

However, this idea was shattered the moment Biff and Willy’s relationship reached its breaking point at the knowledge of his father’s affair. No matter how deep the love and admiration that was once prominent in Biff, it cannot compare to the secret he has to withhold from the rest of the family. Any form of attachment was lost forever – and with this loss of love also comes the loss of any influence in Biff’s life from his father.

In result, Willy is not able to make his final sale which was to determine him as a successful salesman.

Willy ends up in a spiral of depression due to his affair, an unprofitable career, and his estranged relationship with Biff. In his mind there is no point of return for his life and career… Until at the end of the play, that is, when Biff agrees he needs to make an attempt to redeem his relationship with his father. Biff meets his father in the garden, who is planting seeds and talking about his plan to leave $20,000 of insurance money to the family. The two talk and as he is moved to tears, Biff breaks down crying in front of his father.

Excited and overjoyed, Willy sees the light at the end of the tunnel.

“Oh, Biff! [staring wildly] He cried! Cried to me. [He is chocking with his love, and now cries out his promise] That boy—that boy is going to be magnificent!”

He feels his relationship with Biff has been saved, and cries that Biff loves him – so much so, he wants to be a salesman as well as his father.

Willy believes he has made the final sale…

And he can finally die the death of a salesman – with the relationship he felt necessary to be successful in the palm of his hands. 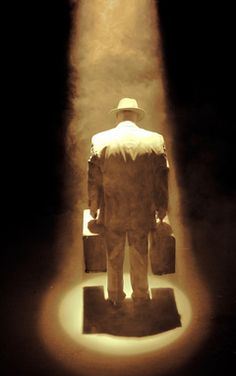 I thought of writing this blog during our socratic discussion before the break – I believe it was Siddharth who asked the question of “Why did Willy Loman kill himself?”.

The instant answer that popped into my mind felt as if it stemmed from something Willy claimed in the play – to get life insurance for his family.

It is no doubt that Willy was not in the right mental state specifically at the end of the play. So, in his crazed state, I believed Willy was convinced Biff was going to create his own business and become a salesman.

I wanted to explore the reasons of why I thought Willy was illusioned into thinking his son wanted to strive for the same life, yet more successful. Someone said something during our discussion which made me feel as if I had a different idea to his death than others, although I’m not completely sure. I’m very interested in finding out what the class thought Willy’s motivations behind suicide were and whether or not the answer is told straightforward or if it is to be read in between the lines.

I feel as though we as readers miss so much on the first read, something that could completely change my ideas if someone were to point it out. If you comment, feel free to tell me what you disagree with or your own ideas about Willy’s death. I would love to hear it and be able to form a more concrete idea about the end of the play.