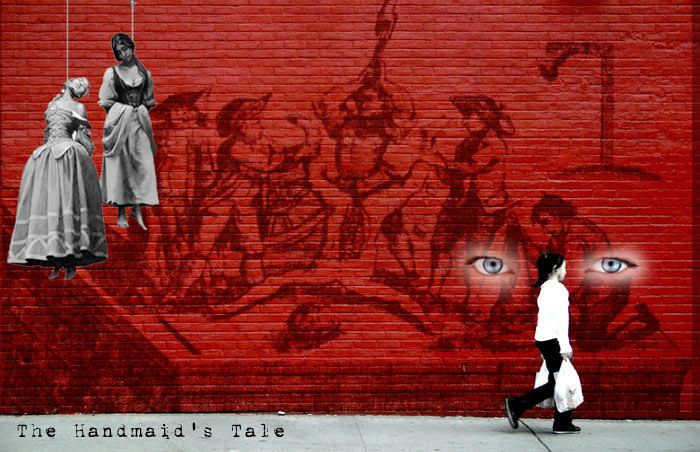 The following is a poem from my perspective of Offred, the protagonist in The Handmaid’s Tale, by Margaret Atwood. I am trying to experiment more with my previously non-existent creative writing, hence the numerous poems I have been trying to write, but I also felt that to distance myself so much as to write a critical analysis of Offred and how she made me feel would be an injustice to not only the ideas postulated in The Handmaid’s Tale, but also to the connection I had formed to the book itself – experiencing is just as beneficial to the intellectual as analyzing.
Through this novel, Margaret Atwood has allowed me to appreciate the importance of empathy, not just sympathy, an area that I believe I am lacking in. Never have I understood,emotionally, as much as I have when reading The Handmaid’s Tale, and it was the only book where I actually got mad at the ending – I did not want to read Professor Pieixoto’s lighthearted, distanced, analytical lecture on the Republic of Gilead, even though I now realize that I read articles and lectures like this one everyday. While sympathy is imperative to one’s daily interactions with others, there is a level of engagement in sympathy that is deficient when compared to empathy – it is an abundance of sympathy and the disregard or misconception of empathy that causes personal and societal repercussions. The interplay between personal or collective pursuits of self interest and empathy is non existent – one cannot wholeheartedly and without regard to their impact on others pursue one’s interest if they are empathetic. Sympathy, however, allows those in pursuit of their self interest to recognize and therefore manipulate those who inhibit their pursuit without guilt.
All atrocities written about in The Handmaid’s Tale were based off true events, events that  as a society we have become desensitized to and unappreciative of. Though it may not be the most pleasant nor easy, The Handmaid’s Tale has taught me to become less distanced from the things that society has shunned, to truly recognize the depths of pain and suffering that the individual person has endured. For if society continues ,not to be ignorant, but to ignore the impact of heinous actions, history will be bound to repeat itself – the perceived perspective of a group desensitizes and undermines the perspective of an individual during times of crisis as seen by sympathetic outsiders. Ergo, this poem is more of a personal response to Offred, and how I understood her, weaving in words or quotes from the book that I believe have great value to the development and significance of the “tale” itself.
Nolite te bastardes carborundorum

she was embalmed in the saltwater of her unfallen tears.

The salt crystallized in her veins

of who she is

These are the principles she lives by now.

she cannot see the temptation,

Suffocated by the freedom from,

liberated by past freedoms to –

if society has changed,

has she changed too?

Or rather is her acceptance

of what society has become

a mechanism of self – preservation,

embalming a past identity,

so as to not completely lose herself?

embalmed in the saltwater of unfallen tears,

Illusions of what these words used to mean,

by what they have become.

Embalmed in the saltwater of her unfallen tears,

she feels the numbness

of one of Serena Joy’s blue irises,

breaking free of its confines, its limitations, its

But she is not a blue iris.

she is a red tulip,

It is in the night that she can escape.

Pain she had expected,

but not the numbness,

not the uselessness of time,

as she lies still

listening to the  deafening white noise

she has given in.

to be invisible, unknown to the world,

for if it knows you,

then, and only then,

will life become your reality.

For she now lives in the blank spaces

between the words and the white paper

as schoolboys once did not long ago,

in the small victories,

the subtle actions of insubordination,

through which she leaves us,

engraving in our hearts, like the schoolboys once engraved in their school possessions –

Don’t let the bastards grind you down.

*The capitalization of all words at the beginning of the sentences except for the word “she” was intentional –  I felt that it created the sense of a lacking identity, similar to how Offred’s previous name is never revealed in The Handmaid’s Tale.