sticks of eyeliner are

This is because there is something living behind my eyes,

a part of myself I will never grace with a name

or try to drown in tears

for fear that I will baptize him.

There is something living behind my eyes.

It’s veiled in a haze of distance,

hiding in the twisting riddle maze of my iris,

embedding itself in the lining of my pupil,

this thing living in my eyes

is something that has grown in the darkness

just as the darkness has grown in him.

I didn’t always know it was there.

I grew up checking the closets and curtains

for monsters without knowing

behind eyelids that flutter at night

building minefields into my pupils,

weaving fear into the lining of my retinas,

festering within the perimeters of my blind spot,

There he lives, behind the glass

the most real part of me

and also the most hideous.

child of the knives in his back, hateful

but trained to be

because of the people

who named him ugly, grotesque,

he make meals of remorse

and spins scars out of guilt.

My body trembles with repulsion,

I’ve tried so hard to blink this thing away

so I don’t have to feel

But the twisted thing is,

I don’t know who I am without my monster.

I’ve always been scared of eyes,

you’ll look into mine and see

he’s been contained for so long

that freedom has become

just another form of vengeance.

I’m ashamed of him.

These mirrors, these lights, these eyes

they don’t know what they’re looking at.

tying my eyelashes into nooses,

with my sense of direction,

drawing the line between heaven and hell

can be redrawn in chalk.

Games can be made out of anything, after all –

and I’m afraid if I try

I’m afraid the next time you scratch me

I’ll hurt you back.

Because my monster keeps telling me about

of learning to dominate someone

who once terrified you.

I want to be better than that.

But I still can’t look myself in the eye.

or a pair of eyes

strong enough to hold him yet –

strong enough to hold me

in all of my parts,

in light, and in the darkness

that lives behind my eyes. 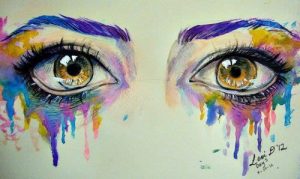 This was a poem I wrote for my “Portrait of Me” presentation and expresses how my very real aversion to eyes is a result of fear; it is a fear exposing how terrible I really am, at the core of my being. As much as I try to be good in every way I know how, there is a part of me that begs to be selfish, a part of me that is stronger and more influential than I would like it to be.

My eyes are the most vulnerable part of my body, thus I am very protective of them. For example, I wear glasses even though I could wear contacts because they are a stronger physical barrier between the world and my soul. I don’t like it when people force eye contact for too long, because even if they don’t know me, there’s always a chance they might catch a glimpse of this cruel, angry thing I have tried so hard to bury.

I desperately want to be good. But I am selfish by nature and I am selfless by nurture; this means I am still trying to find a balance between who I am and who I want to be.

The thing is, I am only so ashamed of selfishness within me because I have been taught that ‘selfish’ is synonymous with ‘evil.’ Selfishness is wrong, and that’s all there is to it. Conversely, selflessness is pure. To be selfless is to be good. It’s that simple.

The complicated interplay between selfishness and selflessness is something that fascinates me, but also terrifies me. How is it that I know myself to be selfish and want myself to be selfless when I don’t really know what either of these things are?

What I do know is that the monster who hides behind my eyes, whether I decide him to be selfish or selfless, is impulsive. He is emotional and exhausted and confused. He is to be pitied. But he is also to be treated with caution.

I guess I’m still trying to figure out how to accept him without giving in to him.

6 thoughts on “Behind My Eyes”