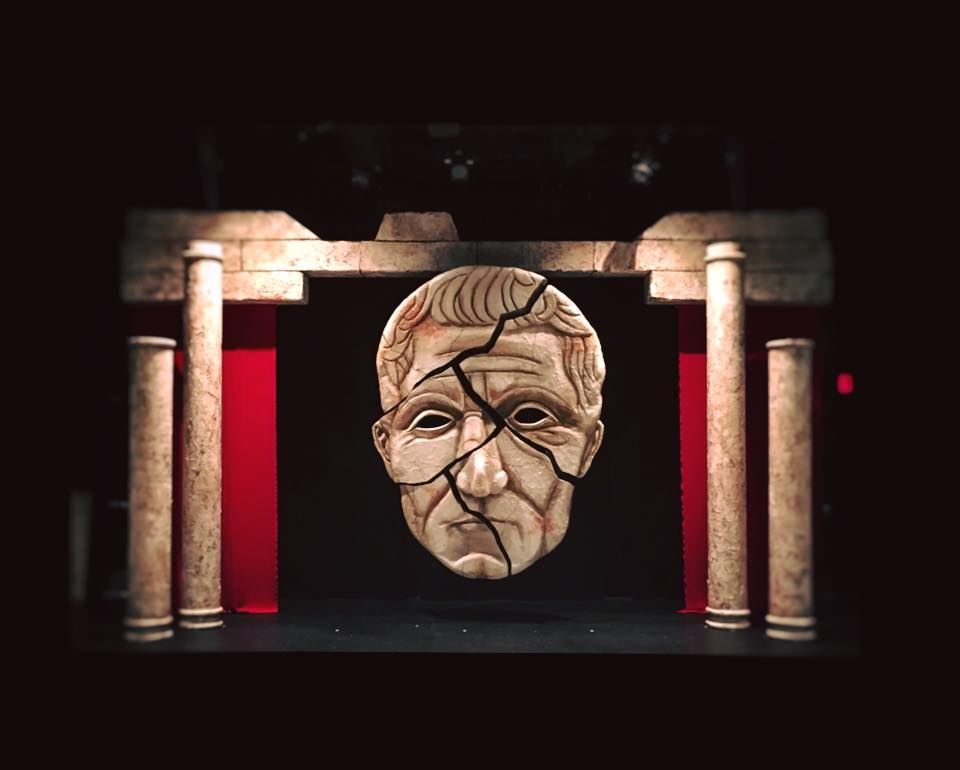 Julius Caesar. Possibly the first Shakespearean play (after Romeo and Juliet of course…) that I have ever known about. Shown to me as a film back in Grade Eight, it was the first play that made me actually appreciate the storytelling power that a Shakespeare piece had.  I instantly took a liking to Caesar himself. A proud and powerful man, leader of an empire, loved by all his followers. Back in Grade Eight, I could not fathom as to why anyone would want to kill him, apart from the sheer force of greed.

I kept this question in mind when I went to see The Shakespeare Company’s production of Julius Caesar – and the answer came to me. Any single person can not safely make a claim or a decision on their own in this play. This struck me during Act III.

Possibly one of the most crucial decisions made within Julius Caesar is Caesar’s decision to attend the Senate meeting on the Ides of March. Caesar is used to being in power, where his word is final and it is difficult to convince him otherwise. And this is what gave me my first thought as to why Roman society wanted Caesar out.

Historically, the Romans, before claiming independence (and by that, I mean slaughtering their superiors) were once ruled by a rather savage society, the Etruscans. The Etruscans had total political control of southern Italy, and had a strict aristocratic and monarchical elite class, leaving the plebian Romans neglected and left to fend for themselves. After over two hundred years of abuse, the Romans overthrew the government, and swore an oath that they would never be ruled by a king. The term ‘king’ became taboo within Roman culture – they established a republic, always being under the power of a Cabinet, or a series of annually elected magistrates – anything but a dreaded king. This deep rooted fear of a single person being in control of something leeched into every aspect of a Roman’s life.

The obvious exception to that rule in this play is that of the Soothsayer, the woman who speaks for herself and only herself. You never see her conversing with other characters in the play – in fact she seems to shut down and refuse to speak when someone addresses her. And, to further prove how terrified Romans are of a lone person, her voice is silenced during the civil war (literally, seeing as her tongue is cut out from her).

When Cassius first has his idea to slay Caesar, he does not take time to ponder about it on his own. No, he goes straight to other Council members and discusses the issue. The conversation that he then has with Brutus isn’t much about him asking Brutus to agree with his actions – it is to get Brutus to act with him. Cassius is terrified of doing anything on his own, such has been the status quo for generations.

The idea of this civilization working in pairs goes farther than simply people needing others’ approval to act. This characters in this play even have a tendency to change their minds – never once, but twice. Take Caesar himself. He wakes up on the Ides of March with full intention to go to the Senate meeting. Calpurnia, his wife, convinces him to stay home, after a horrifying dream she has. (Note that she is just one person who had this dream, which automatically sets her up for failure). Caesar obliges and changed his mind about attending the Senate meeting. Then Decius Brutus, on the behalf of the Senate, convinces him to come anyways. As always, whoever is acting on the behalf of multiple people sways the ultimate decision. Caesar departs, scorning Calpurnia for her interference.

How foolish do your fears seem now, Calpurnia!

I am ashamed I did yield to them.

After his death, the crowd is also swayed in favor of the death of Caesar, but then back again, calling the conspirators ‘traitors’ and ‘villains’. Finally, the entire relationship between Brutus and Cassius is a massive battle of changing minds. At first, they are friends, but have a massive dispute which almost tips them into hating one another. By the end of the play, they are brothers in death once more.

Mob mentality is the driving factor for almost every action in Julius Caesar, stemming from the raw terror of the rule of one man. Quite literally too, given that the Roman Empire began ruled by a Triumvirate, (directly translatable to ‘The rule of 3 men’). Future leaders would give themselves any title, be it Emperor, Princheps (First Citizen), or any other. This is a very interesting lifestyle, given that out society today encourages competition and separation of people, where we are comfortable being lead by one person, and are able to make decisions on our own, for the most part.

This idea of two, or multiple actions can be seen in countless examples from the Roman Empire, and straying from the course is asking for punishment in that society, something Julius Caesar experiences firsthand.

If only he had actually been Twolius Caesar.