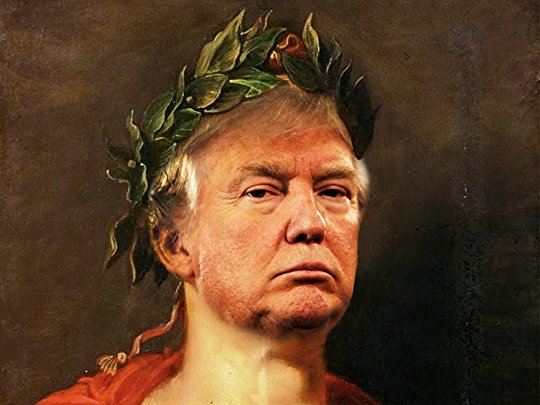 The Shakespeare Company with Ground Zero Theatre and Hit & Myth’s production of Julius Caesar on September 27th, 2017 was a brilliant interpretation of Shakespeare’s classics which captured the inconsistency of an obsessive mob mentality. This to say, if the Roman public had been free-thinking they would not have been so easily swayed to form mobs for and against Caesar. The play’s production allowed for many moments of analytical appreciation for curious minds with aspects such as the symbolic use of blood to the irony of having an omnipotent Caesar in the background throughout the duration of the play. Audience members were left with plenty to ponder upon; however, the aspect of the play which I found most integral when transitioned from text to stage was the arch of the Roman citizens’ outlook on Caesar as it brought forth the notion of admiration versus obsession.

The preliminary stage of the arch began as obsession – an idea or thought that continually preoccupies or intrudes on a person’s mind; excessive, especially extremely so – with loving Caesar. The Roman citizens took their admiration (respect and warm approval) of  his valor and strength during battle and fueled it with passion. In order to convey how strongly the Roman citizens felt director Ron Jenkins used the non-verbal dramatic techniques of lighting, levels and sound effects. His creativity with these was demonstrated during the offering of the crown scene where he was able to harness lighting to draw eyes to Caesar, giving audience members insight into the manner in which the Roman public generally viewed him. Further, having the only other character on stage at the time – Mark Antony – kneeling before him accentuated this notion through the creation of levels in which Caesar was elevated. Accompanying this was the use of overlapping dialogue and shouting through sound effects – accurately depicting the excess of passion and zeal present when individuals are obsessive. Finally, Jenkins’ choice of pacing, regarding the frequency of the citizens’ cheers, further affirmed their obsession and conveyed a strong sense of frenzy.

The Roman public was not only obsessed with loving Caesar; their obsession progressed.  They went from being obsessed with loving him, to being obsessed with hating him, to being obsessed with avenging him – serving as evidence of the inconsistency of passion. The passion of their mob mentality was present through out the play and acted as a catalyst for conflicts as those who were either for or against Caesar were able to build alliances and armies by convincing the general public of their argument. This was most convincingly conveyed during Antony’s speech when the citizens of Rome went from passionately hating Caesar to passionately wanting to avenge his death. The depiction of this shift in the span of approximately ten minutes reassured in my mind just how short lived passion truly is.

Antony’s admiration of Caesar was able to act as a foil for the obsession of the general public as he was somewhat subtle in his admiration. Though numerous dramatic techniques were used to convey Antony’s feelings towards Caesar, most notably used were non-verbal tactics – namely, body language. Antony displayed his admiration and respect of Caesar through his body language such as lowering his head, kissing his hand and cordial gestures of the nature. Unlike the riotous public, Antony praised Caesar infrequently and displayed his feeling toward him through actions, and at times words, significantly fainter than those of the Roman citizens. This contrast was marvelously done as the greatly underwhelming quality of admiration was not lost in the theatrics; rather, was exemplified when compared with obsession.

With all this two things became painfully clear – first, Jenkins is a magnificent director who was able to capture the unpredictability of passion; second, admiration and obsession can quickly become skewed. Whilst pondering on the latter I realized the majority of the conflicts in the play, to a great extent, were due to the public’s distortion of the fine line between admiration and obsession. Even though Shakespeare wrote Julius Caesar in 1599 this aspect of the tragedy still rings true to today. In contemporary discussions, such as that of US president Donald Trump, the public’s relinquishing of free thought and acquiescing to the obsession of a feeling – to love or to loathe – creates great division within any society. Although, as an audience member, I was left in awe of the production value of the show and the sensation of the experience, I am now left to ask myself am I truly free thinking in my praise or have I too blurred the lines of admiration and obsession and become lost in the mob mentality?

Thanks to Alysha and Lauryn for their suggestion to focus on consistency of voice.

6 thoughts on “The Fine Line Between Admiration and Obsession”