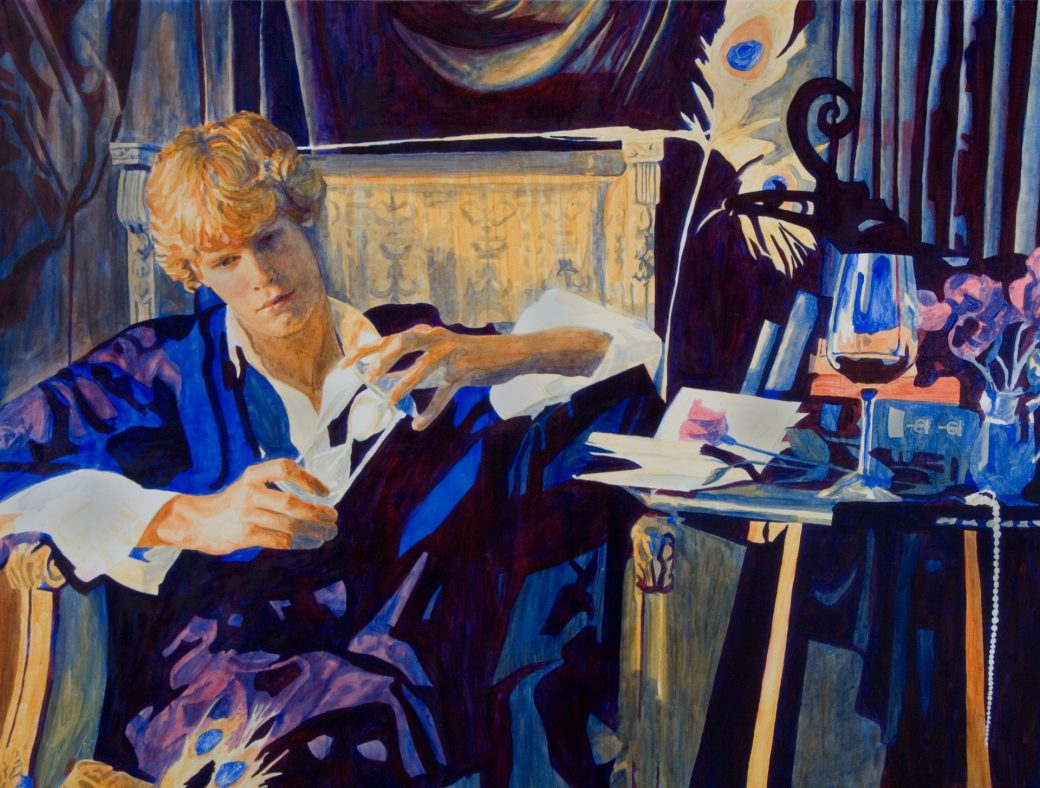 Prompt: The role self-perception plays when individuals seek to reconcile the conflict between illusion and reality.

Illusions are generally viewed as the quintessence of escapism; through the creation of false ideals, one may find the motivation to alter an undesirable reality. An individual’s self-perception, or, identity, is responsible for the creation of these discrepancies between one’s illusion—that is, the perceived truth embedded in their idyllic concept of the world—and the reality of their existence. If an individual is unable to reconcile the conflict between ideals and reality, however, then said self-perception—and therefore, the illusion—must be altered to meet the truth of one’s existence. Otherwise, the individual will remain trapped within the duplicity created by the split in self-image, and thus be unable to create a meaningful identity. This is what occurs to the titular character in Oscar Wilde’s The Picture of Dorian Gray. As Dorian’s self-perception changes due to the influence of those around him, his adopted illusion of class, wealth, and beauty diverges from the reality of his immoral actions, creating two distinct personas. Dorian’s attempt to hide the corruption of his soul under his ideals of hedonism results in paranoia and unfulfillment, ultimately leading to his death. Through Dorian’s undoing, Wilde demonstrates that self-perception, when responsible for the creation of illusions which do not match with one’s reality, will hinder an individual’s ability to lead a fulfilling existence; this is portrayed in the novel through Dorian’s changed identity, the creation of ideals that conflict with his actions, and his subsequent descent into corruption. In other words, because Dorian’s self-perception was rooted solely within his illusions, he was unable to perceive the truth of his actuality. As a consequence of this conflict remaining unreconciled, Dorian lost the opportunity to create a more stable identity, one rooted within his reality instead of deceptive illusions.

The first shift in Dorian’s self-perception can be attributed to Basil and Lord Henry’s influence; because they projected their ideals onto Dorian, he began to incorporate the illusions of beauty and youth into his identity.  When Lord Henry says “beauty is a form of genius—is higher, indeed, than genius” (22) it is with the intent to dominate Dorian’s personality—Lord Henry desires control over a vacuous individual’s self-perception. Basil also contributes to forming Dorian’s obsession with appearances and youth through his reverence of the “young Adonis” who is “made out of ivory and rose-leaves” (3); by worshiping Dorian’s beauty, he reinforces the importance of a fleeting illusion, one which is impossible to maintain in one’s reality. As Dorian’s identity shifts due to the influence of his friends, he begins to associate his sense of self with unrealistic ideals, illustrating how an individual’s self-perception influences the illusions one adopts—these self-deceptive ideals, in turn, may conflict with the individual’s reality. This is precisely what happens to Dorian—he is aware the illusion of youth cannot be maintained into his old age, making him jealous of the inanimate objects—including his own portrait—which are able to maintain their artistry. Instead of resolving this conflict by altering his own self-perception by accepting the loss of beauty as an inevitable aspect of life, however, Dorian exclaims “Why should it [the portrait] keep what I must lose?” (27) thereby striking a Faustian bargain. At this time, Dorian fully embraces the illusory ideals perpetuated by his assumed self-perception; Wilde employs this moment to create the divide between Dorian’s illusions and his actuality, demonstrating the role one’s self-perception plays in the creation of conflict between illusions and reality. Essentially, Wilde argues that the transformation of one’s identity causes an individual to seek security within their sense of being through the embrace of the idyllic, despite the possibility of these illusions bifurcating from the truth of one’s existence. Dorian, however, does not take action to stop the changing of his identity—he is seduced by the concepts of hedonism and aestheticism supported by Lord Henry, and thus falls further into his illusions.

Dorian’s acceptance of his new self-perception is displayed through his actions and desires; because his identity is rooted within the illusions of beauty, he falls for Sybil Vane, failing to realize the truth; to him, “she was always a dream, a phantom that flitted through Shakespeare’s plays” (106-107). He loved the idea of Sybil, not the reality of her, showing how one’s self-image can cause an individual to accept an illusion as actuality. Once Sybil truly fell in love with Dorian, she was unable to uphold the very illusion her “prince charming” admired, and so Dorian, obsessed with his own self-perception as an aesthete, addressed the conflict between his ideal and the reality by breaking Sybil’s heart. This action, however, failed to resolve the tension—instead, it led to Sybil’s death by suicide, demonstrating how when identity is the factor inhibiting an individual from resolving a conflict, attempting to preserve one’s own view of themselves may cause them to act cruelly. Though Sybil’s death does cause Dorian’s self-perception to falter momentarily—when he calls her death “terrible”—Lord Henry’s sway over Dorian’s identity results in him admitting “that this thing that has happened does not affect [him] as it should” and instead it seemed “to [him] to be simply like a wonderful ending to a wonderful play” (104). Dorian’s unsympathetic response to the death of someone he once claimed to have loved reveals the dichotomy between Dorian’s perfectly tragic illusion and the heartless superficiality of his reality; through this contrariety, Wilde highlights Dorian’s increasing levels of corruption as he begins to self-identify more with the illusions of beauty and youth, going so far as to suppress the true gravity of his actions in order to perpetuate the ideals. Dorian continues to indulge in his illusions by going to “opium dens where one could buy oblivion, dens of horror where the memory of old sins could be destroyed by the madness of sins that were new”—he hungers for novel stimulus, because “curing his soul by the means of the senses” (193) would prevent the reality of his immoral actions from affecting him. Essentially, Dorian seeks reprieve from his undesirable reality by reinforcing his own fantasies, thereby embedding his self-perception entirely into his hedonistic ideals. Ironically, this serves to amplify the conflict between his illusions and reality by further dividing the two.

As a result of Dorian’s self-perception becoming embedded entirely within his illusions rather than his reality, he begins to experience paranoia stemming from the duality of his character—he is afraid of being seen as the man shown by his own portrait. His fear of James Vane is one manifestation of said paranoia. Dorian’s own conscience had “[raised] such fearful phantoms, and gave them visible form” (210); essentially, Dorian’s misconduct haunts his reality. Because he had already acted upon his illusions, however, he is no longer able to revert his self-perception into its original state. Wilde uses this to indicate the permanence of acting upon one’s identity in relation to their ideals—by taking action, regardless of whether the act is influenced by delusions, an individual will have a distinct impact on their own reality. For Dorian, this impact affects his mental state significantly, as he begins to believe “shadows of his crime were to peer at him from silent corners, to mock him from secret places, to whisper in his ear as he sat at the feast, [and] to wake him with icy fingers as he lay asleep” (210). Due to the toll on his own consciousness, Dorian attempts to eliminate what he deems to be sources of insecurity; in other words, he attempts to counter the aspects of his life that display the true hideousness of his reality—and, more specifically, his own soul—in a final attempt to maintain his self-perception. At this stage, Dorian lacks an identity beyond his illusion, making it impossible for him to reconcile the conflict between his illusion and reality without losing his identity in the process; thus, he cannot claim responsibility for his crimes. Instead, Dorian opts to destroy his portrait, thinking it  “would kill the past, and when that was dead, he would be free [and] . . . at peace” (233). In his mania, however, Dorian fails to realize his portrait is connected to his own life—and so he dies in his final attempt to reverse the negative impact of his illusions on his reality. Since Dorian’s self-perception did not alter and he still adhered to his ideals of pleasure without consequence, he failed to reconcile the conflict haunting him. This inability to reach a resolution shows the deceptiveness of the idyllic and the dangers of placing one’s self-perception into such fantasies; Dorian dies “withered, wrinkled, and loathsome of visage” (234), becoming the very thing he had wanted to avoid when he made the wish on the portrait.

Dorian’s downfall can be attributed to his lack of a self-perception fixed within his reality. His reliance on illusions in the formation of his identity and his unwillingness to sacrifice his self-view when faced with a divide in his ideals and reality counteracted all other endeavours to reconcile this conflict. In fact, Dorian’s self-perception was the factor preventing him from ever finding peace in his reality. Through Dorian’s arch in The Picture of Dorian Gray, Oscar Wilde indicates that self-perception, when rooted within illusions that contradict with reality, will negatively impact an individual’s ability to live a truthful existence. Though ideals can provide comfort in the form of escapism, over-reliance on them can inhibit one’s attempts to find truth within reality. Ultimately, tying one’s identity to illusions can hinder one’s ability to perceive their own reality. 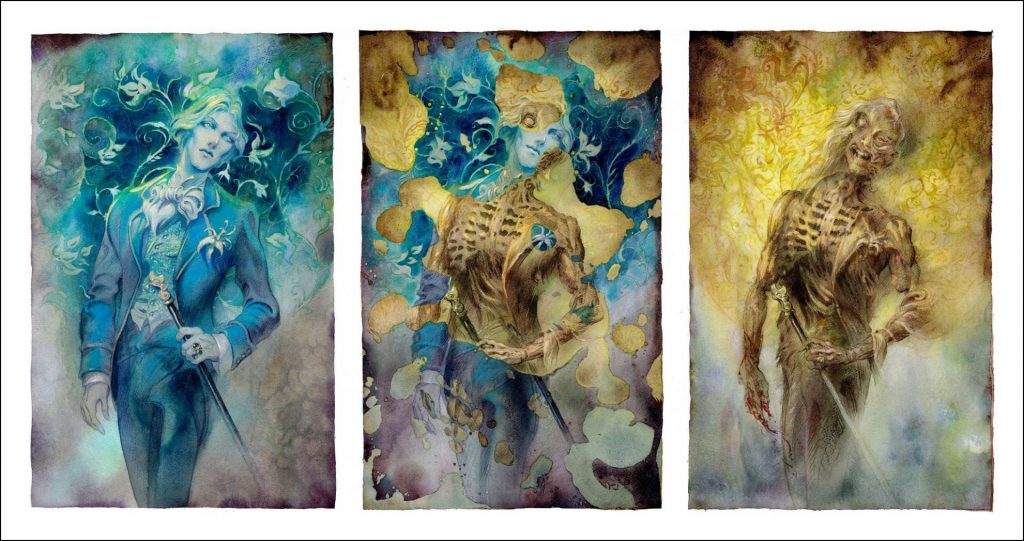 4 thoughts on “Critical: The Effect of Self-Perception on the Conflict Between Illusion and Reality”