For this blog, I decided to administer the research time Hunniesett gave us that one day in the lab to do secondary research on Pride and Prejudice into my blog. 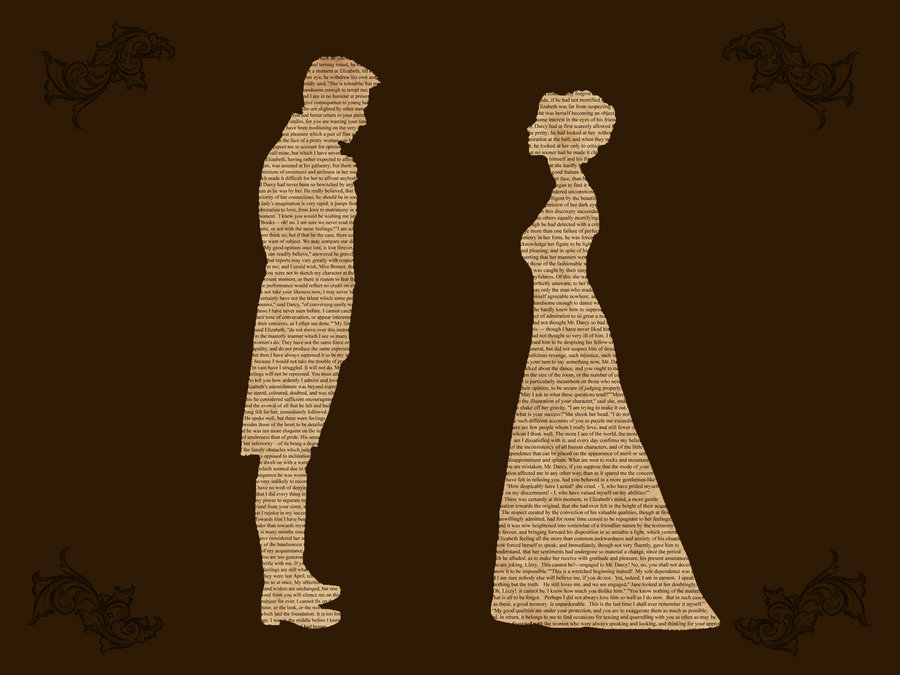 Jane Austen’s book, Pride and Prejudice was published in the year 1813. The story is told by a third-person all-knowing narrator who reveals the plot and personality of each character in the novel through the use of dialogue. Austen makes use of a narrative technique called “free indirect discourse”, in which the character’s words or spoken thoughts are written without quotation; providing deeper insight into the character’s inner thoughts. The title itself alludes to two traits demonstrated by the main characters, Fitzwilliam Darcy and Elizabeth Bennet. Darcy’s superior manner and Elizabeth’s initial judgments about his character lead to misunderstandings, open conflict, and, eventually, reconciliation. The novel touches on 3 major themes that resounded to me: Class, Women, and Society. Historically, the setting of Pride And Prejudice suits the themes of societal pressures, as it was written in England’s Georgian era, named for a series of kings named George, (George 111-american revolution). Austen revised the book during regency era (George III was deemed insane and his son George IV began ruling as regent and french military leader Napoleon Bonaparte seemed determined to rule the world, and English worried that his troops might cross the English Channel). The Regency era marked the beginning of the industrial revolution. Because of changes in the country’s economic structure, more people had the opportunity to become wealthy through manufacturing and trade, and many of the characters in Pride and Prejudice allude to this era. Mr. Bingley, who comes from a family that inherited its wealth from their father’s business in the north of England—the seat of heavily industrial cities like Manchester and Mr. Gardiner, Elizabeth’s uncle, who gains upper-middle-class status through business in London. During this time, wealth accumulated through landownership and passed down through inheritance was considered the very best kind of wealth one could ever attain.

During this time, the order of hierarchy went:

The interactions of the characters of Pride and Prejudice represent the middle of the hierarchical pyramid—the gentry. Jane Austen herself  belonged to the educated upper-middle-class gentry. Women of this social standing in the Regency period did not have careers or legal rights. Unless a gentlewoman became a governess (a live-in tutor of wealthy children), her only acceptable role in life was as a wife. To attract a husband, women of the gentry were expected to create a list of accomplishments, including being skilled in needlework, music, foreign languages, and art. And to prepare for her role as wife, mother, and hostess, a gentlewoman was expected to master rules of etiquette, such as making social calls and accepting guests.With the exception of women who were fortunate to inherit some wealth from their parents, marriage was also the only way for a woman to determine her financial destiny. By law, women had little control over their finances; money was controlled by the men of the family. Women who did not marry did not have a clear role in society. They were called spinsters, and they were made to run the household of an unmarried brother. Austen herself never got married. When her father died, she lived off of money  that her brother’s provided.

In Pride and Prejudice, society is actively involved in the private lives of individuals, and the characters often questioned their responsibility to the world around them. For example, when Wickham attempts to elope with Lydia, Darcy seems to develop a guilt for not having publicly shamed him when he had the chance. After all, Lydia’s choice put her family and community as risk of gaining a tarnished reputation. Elizabeth, meanwhile, is proudly “independent and individualistic”. She possesses the ability to transcend her limitations because she is confident enough to go after what she wants. However, her individualistic nature misleads her as she works through her feelings for Darcy, but  she eventually finds her way to him. Jane Austen displays the power public opinion has on individual action; how society has a crucial role in promoting virtue and therefore, “engendering” individual happiness.

The novel depicts the over-emphasis on class, especially in terms of judging a person’s character. The novel illustrates Elizabeth’s view that the possessions of wealth is not a virtue. Initially, Darcy displays a pride that is based on his “class-consciousness”, but as he eventually comes to accept Elizabeth’s perspective, he joins Elizabeth in rejecting the mindset of the upper-class characters who are mean, petty, and closed-minded; such as characters like Lady Catherine and Mr. Bingley’s sisters.

Austen is very critical of the gender injustices that were present in the early 19th century of that society. Pride and Prejudice displays how  women marry for the sake of financial security. An example of this is Charlotte. She settles for the hand of Mr. Collins because he is the safest option for her to take. Through Elizabeth, Austen shows that women are just as intelligent and capable as men, and Jane Austen herself went against societal convention by remaining single and earning a living through writing. In the novel, Elizabeth’s happy ending reveals Austen’s beliefs that women have the right to remain independent until they meet the right man.