The Pursuit of an Ideal without Accountability to Truth

the significance of idealism and truth in an individual’s life.”

Idealism, the act of pursuing one’s ideals, often uncovers the true reality one faces, however the appeal of an ideal can lead to the dismissal of this truth. Truth, in this context, consists of the circumstances that one faces and therefore determines the attainability of an ideal – if the ideal is within the scope of these truths, it will be attainable.  It is in this manner that one, as a result of a lost sense of accountability to reality in their pursuit of an ideal, may fail to attain an ideal, becoming obsessed with it in the process. Exemplified throughout Mary Shelley’s novel Frankenstein, the perception of an individual’s ideal will conflict with reality if one is unwilling to see the truth in their circumstances, falling prey to the appeal of the ideal, not taking the reality they face into consideration. Ultimately, this leads to an addictive behaviour towards their ideals, the individual abandoning the truths of their reality until they are forced to recognize these truths due to the results of their failed ideal. Mary Shelley explores these ideas through Victor Frankenstein and his unwillingness to consider the reality of his circumstances in relation to his pursuit to create an ideal being, the failure of his ideal as a result of this dismissal of truth, and, finally, the realization for the accountability he holds to reality in relation to these truths.

The processes of reanimation or creation, while they are sublime in a theoretical aspect, can lead to an obsessive pursuit, if pursued without first recognizing, and thus being held accountable, to the truth of one’s ideal, when creating an ideal being, as seen through Victor Frankenstein’s attempts to do so.  As a student, Frankenstein was imbued with the initiative to discover the principles of life, though he did not consider the immutable truths of nature in this initiative. This blind ambition led to the Frankenstein’s obsessive pursuit of his ideals, as illustrated through his own description of his pursuit, “Life and death appeared to me ideal bounds… Sometimes I grew alarmed at the wreck I had perceived I had become; the energy of my purpose alone sustained me: my labours would soon end, and I believed that exercise and amusement would then drive away incipient disease; and I promised myself both of these when my creation should be complete.” (54-57) In his blind ambition, Frankenstein became consumed by his work, ironically depriving himself of his own necessities of life in pursuit to create an ideal life. Frankenstein’s idealistic desire to create, his pursuit in attaining his ideal of uncovering the secrets of life through the creation of a perfect species, overshadowed every other aspect of his life, rendering him unable to think about anything but the perfect outcome of his ideal. However, Frankenstein himself is aware of the alienated, isolated individual he had become at his own fault. This is exemplified through his recognition of the wreck he had become and yet his complete ignorance of this truth in order to follow through with his ideal; the labours he had imposed upon himself with becoming his sustenance as opposed to the amusement and enjoyment that should be present in one’s life. With no accountability to the truths of his reality when creating his being, Frankenstein lacked the self control to not become utterly seduced by his ideals over reality. It is for these reasons that his ideal had failed – when Frankenstein’s creation came to life, his enrapture quickly turned to disgust at creating such an abhorred being, a monster. Thus, a failure to recognize the truths in an individual’s life when in pursuit of an ideal signifies the start to an obsessive lifestyle, one in favour of an ideal due to a lack of responsibility one has to their truths. As evident through Frankenstein’s inability to pursue anything but his ideal, in addition to the failure of his ideal, the ultimate downfall of an individual – the refusal to act and be present in their reality – is imminent.

Frankenstein is then left to endure the havoc of his monster, due to the fact that a failed ideal brings about the truth one faces, as he neglected to realize the responsibilities an omnipotent being holds to their creation, such as caring for it as Frankenstein neglected to do. Upon his interaction with his creation in the mountains, Frankenstein realized the truths he so willingly disregarded in pursuit of his ideal. As Frankenstein listened monster’s recollections of his interactions with society as a detestable being, he “felt the duties of a creator towards his creature… and that [he] ought to render [his creation] happy before [complaining] of his wickedness.”  (107)  It is in this moment that Frankenstein faces the truth of his failed ideal, and consequently attempts to redeem this ideal, taking responsibility for his actions as he is now held accountable by the truth his creation is confronted by. Both the monster’s and Frankenstein’s ideals are pursued in this sense, the monster in his ideal of companionship and acceptance and Frankenstein in the restoration of his ideal. With the intention to resolve his ideal, Frankenstein now becomes accountable to his truths, the acceptance or rejection of this truth is essential to Frankenstein’s ability to act within reality. Initially, Frankenstein’s obsession with his ideal was unrestricted in his pursuit, though when faced with the results of his ignominious conduct, he was forced to realize the reality both he and his creation encountered. Therefore it can be concluded that with the failure of an ideal as  a result of a dismissal of truth, the redemption of this ideal is possible through the realization of one’s reality. Accordingly, an individual must take responsibility and be held accountable to this truth of reality, such as Frankenstein in his recognition of his responsibilities as a creator.

In relation to his newfound accountability to the truths that he faces, Frankenstein is enabled to act according to these truths, rather than the appeal of his ideals. However, with the request that he create a female being, equally abhorred and unappealing in its outward appearance, Frankenstein resorts back to his initial feelings of revulsion towards his monster who swore vengeance upon Frankenstein as a result. Frankenstein was overcome with the responsibility he held to his own truth, abandoning all chances at absolving his failed ideal and his responsibilities as an omnipotent being, as demonstrated through his reasoning for the destruction of his second creature, “I had been moved by the sophisms of the being I had created; I had been struck senseless by fiendish threats; but for now, for the first time, the wickedness of my promise burst upon me; I shuddered to think that future ages might curse me as their pest, whose selfishness had not hesitated to buy its own peace at the price, perhaps, of the existence of the whole human race.” (180)  Frankenstein has acknowledged the truths of creating a second, unidealistic being and thus has decided to dissolve all attempts at creating a second being. With this, Frankenstein chooses to act in accordance to his responsibility to the truths he himself faces and destroys the second being, his monster filled with rage and contempt as a result.  Frankenstein’s ability to recognize, though not accept, the truth of not only his situation, but of his creations of which he is also responsible, such as his responsibilities as creator, are blinded by thoughts of his own self preservation and obsession with his futile ideal – if he created another imperfect being, this along with the possibility of procreation, would result in yet another failed ideal and, as he stated, comes at a price “perhaps, of the existence of the whole human race.” If he did, however, create another being, he would be fulfilling his duty as an omnipotent being, and, as promised by his creation, would no longer be tormented. At this point, Frankenstein effectively chooses to disregard the responsibilities he has a creator, to be held accountable to his own truth that he personally faces – his newfound morality has led him to recognize the impacts his ideals have on society –  and not risk the failure of a second ideal, at the expense of the accountability he holds to his creation. In doing so, Frankenstein’s entire truth of his circumstances is revealed, yet he still chooses to disregard them due to his obsession with the failure of his ideal, and the potential consequences of two failed ideals. Hence, he is unable to redeem his failed ideal; Frankenstein willingly chooses not to be held accountable to the truth he faces, the truth that he has duties as a creator, in favour of his own personal integrity. While the realization of the truth in one’s ideal can lead to the redemption of their failed ideal, the acceptance of these personal truths, and consequent accountability to others impacted by the ideal, is critical to the full redemption of an ideal.

Exemplified through Frankenstein’s idealism, Shelley depicts the conflict between the ideal and reality that occurs when one is unwilling to see the truth in their circumstances if pursuing an ideal without regard to the truths of their circumstances. Frankenstein’s obsessive pursuit of his ideals has lead to a failure to recognize the reality of his ideals; the perception that his ideal will become true consuming him over the course of his life, leading to an inability to accept anything but the ideal outcome. The reality that an individual faces determines the attainability of their ideals; though a refusal to recognize the accountability one holds to their truths can lead to the development of obsessive, selfish tendencies in hopes that their ideal will be obtained or redeemed, as showcased through Frankenstein as written by Mary Shelley. It can therefore be determined that the pursuit of an ideal will remain just that – a pursuit – if one does not recognize the responsibility they hold to pursuing their ideal within the scopes of their truths. 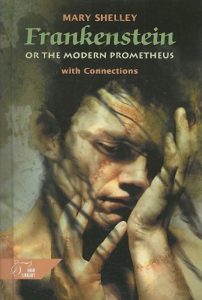 2 thoughts on “Polished Critical, The Pursuit of an Ideal without Accountability to Truth”