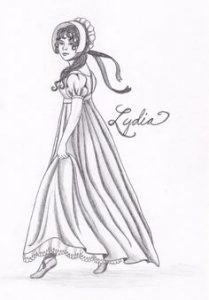 “He lied to me! Even though I was foolish, I am not dumb I realized my situation after a while and I regretted even wasting a second with him, but I was so amazed that a handsome man like Wickham, would want to go on the claim me.

I was young then and you know what it’s like to want to fall in love.

I’ve always heard my mother talking about marrying so I figured…  I loved Wickham, at least I thought I did, and I thought he loved me. Only to find out it wasn’t me but money.

However, when I ran away Wickham knew I had barely any fortune to my name, so he couldn’t possibly be looking for revenge against me, can he? I can’t believe Wickham was actually fleeing the regiment, as he had racked up a huge debt he couldn’t pay. So of course, he let me tag along because he was aware that I liked him, and in doing so he would have me as a female companion, but I grew to learn he had no intention of marrying me. It broke my heart when I realized this.

I always wondered why we didn’t just move to Scotland where we could have gotten married immediately but instead we had to “shack up” in London. We continued to remain unmarried. Until I found it very strange when Darcy came looking for us. But know I understand it was Darcy’s bribe that persuades Wickham to marry me.

Mr. Wickham is an awful human being, he clearly led me to believe we were going to get married. Otherwise, I wouldn’t have ran away with him if I had known the truth. All I wanted was to get married and make my mother and father proud.

I even lived with him before marriage even though it wasn’t considered proper, I didn’t care as I thought we were to be married. I felt so disgusted in constantly asking Elizabeth for money because we were forever in debt, but that is the choice I made, and know I have to live with it.

If it is one thing I have learned from this, it is to only marry for love and don’t accept an obnoxious man just for financial security, so take it from me it’s not worth it. Take your time to find your true love and forget about wealth or social status.