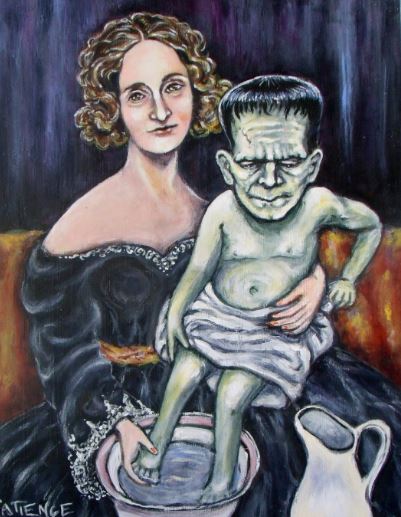 The Cataclysmic Side of Idealism and Truth

“Discuss the idea(s) developed by the text creator in your chosen text about the significance of  idealism and truth in an individual’s life.” (June 2009)

It is not anomalous to observe in society individuals who seek the perfect, idealistic life. More often than not, an individual avoids the truth and instead immerses oneself within the polished and preferred route in pursuit of their ideals; thus, never accomplishing anything and resulting in one’s downfall. This characteristic is exemplified in Mary Shelley’s novel, Frankenstein, through the evolving nature and capabilities of the Monster; Shelley highlights the importance of grasping the fine line between contrived ideals and innovative goals, also known as idealism and truth. In other words, when an individual clings to their idealistic visions, they will often neglect the path that aids accomplishment and progress. The argument made by Mary Shelley is that upon being presented with unfavourable truths, individuals tend to immerse themselves within an artificial and idealistic worldview resulting in an individual’s undoing.

Contradicting with his true nature, a benevolent and generous creature, the Monster – being the result of a gruesome and unnatural process of creation – has an ignominious appearance; therefore, burdening him with the impossibility of reaching his ideals. Through the re-telling of the Monster’s story to Frankenstein, it is clear that initially the Monster was not inflicted by the criticism from mankind; hence, a pure creature not conflicted as to what he should be – his ideals were not present. With pure intentions, the Monster sets out expecting acceptance only to receive anguish and disgust. In one instance, he uses “extreme labour to rescue a young girl from drowning”, but only to be misinterpreted as an attempted murderer. After coming into contact with the human kind and is continuously misinterpreted, he retreats into isolation out of fear and pain.  Essentially, the Monster flees into isolation because no matter what he does, his actions are always mistaken for the worst. Through the re-telling of his tale to Frankenstein, the Monster comments: “Satan has his companions, fellow-devils, to admire and encourage him; but I am solitary and detested”(Shelley 154), this quote exemplifies how abandoned the Monster felt – he claims even a demon in hell is not lonely, they have each other for company, but the Monster, whom has done nothing wrong, had no one. As a matter of speaking, an individual will often times feel self pity when they are overcome with unsolvable abandonment – later leading to one retreating into their idealistic world. During his time in isolation, the Monster starts to develop a sense of an ideal society, one in which he could thrive and be accepted resulting in him turning a blind eye towards everything else in his life. This action shows that when an individual allows idealistic visions to lead one’s actions, they neglect everything other than fulfilling the unachievable vision.

Following the initial rejection of society the Monster stumbles upon a poor family named De Lacey, seeing the family’s kindness towards each other the Monster resonates a sense of belonging towards this family – because of how he was previously treated and rejected, the Monster continues to isolate himself in a hovel on the side of the house – although the De Laceys don’t know of his existence, he is not quite as alone. Through this act, the Monster begins to slowly adapt his ideals, he dreams of one day becoming a part of a family, one in which he is not alone. When an individual is blinded by one’s ideals, they will more often than not lead a path in which their former self may not lead, a mindframe of unfulfillable delights.  One significant moment was that of when he saw his own reflection in a pool of water, he exclaimed: “I had admired the perfect forms of my cottagers – their grace, beauty, and delicate complexions; but how was I terrified when I viewed myself in a transparent pool! At first I started back, unable to believe that it was indeed I who was reflected in the mirror; and when I became fully convinced that I was in reality the monster that I am, I was filled with the bitterest sensations of despondence and mortification. Alas! I did not yet entirely know the fatal effects of this miserable deformity” (Shelley 89). In this passage, the Monster sees his physical deformity for the first time, it goes to show how frightening his appearance was for he was startled by his own image – nevertheless, no matter how awful he appears to the world, the Monster continues to be a benevolent creature towards the De Lacey family. At the time, he does not understand the compliments that the De Lacys direct towards him, but little by little he quietly acquired information about the ways of mankind learning more about the fundamental skills which vouch for his survival. After months of quietly observing the De Lacys, the Monster decides to take a risk and approach the blind old man – being blind, the old man cannot look at the Monsters outward appearance but look favorably upon his good deeds – instead, the act does not go towards his favour and once again, he is banished from humankind. Following the rejection, the Monster realizes that when an individual is wrapped up in an ideal, one will neglect the route in which helps one move forward, and instead the individual will be held back idealizing a world in which he/she will never be a part of. Furthermore, the Monster vows to inflict the pain he has felt upon his creator – this goes to show that when an individual begins to immerse one’s self with an idealistic vision, seldomly does the vision satisfy their needs to a full potential thus, they will descend into their own destruction.

In the very final moments of the Monsters life, he realizes that he caused his own downfall in surrounding himself with visions in which he knew would never come true – he later devoted his life to antagonize and pain Victor, but he realizes that the only person whom should be hurt is himself – he let his ideals control him to such an extent that he dehumanized himself further. More so, these actions support the idea that when an individual chooses to steer away from one’s harsh reality and immerse oneself within an unachievable vision, it will ultimately lead an individual down a road of regrets causing one’s downfall. The last words heard from the Monster were: “Farewell! I leave you, and in the last of human-kind whom these eyes will ever behold. Farewell, Frankenstein! If thou wert yet alive and yet cherished a desire of revenge against me, it would be better satiated in my life than in my destruction. But it was not so; thou didst seek my extinction, that I might not cause greater wretchedness; and if yet, in some mode unknown to me, thou hadst not ceased to think and feel, thou wouldst not desire against me a vengeance greater than that which I feel. Blasted as thou wert, my agony was still superior tho thine; for the bitter sting of remorse will not cease to rankle in my wounds until death shall close them for ever ”(Shelley 166), these words hold vulnerability because it contains so many of the emotions that the Monster has come to terms with. In the end, the monster truly lead a tragic life – allowing his ideals to cause his own downfall.

In Mary Shelley’s novel, Frankenstein, the Monster created various unachievable ideals for he was constantly faced with an unwanted reality. Strictly speaking, the Monster was continually faced with unfavourable truths; thus, immersing his thoughts into an idealistic, artificial worldview, afraid of recognizing reality. Through the evolving nature of the Monster, Mary Shelley highlights the importance of coming to terms with one’s current situation, instead of hiding and shaping an ideal vision. If an individual were to follow in the Monster’s footsteps, they will find themselves abandoned by everything, even their own ideals.