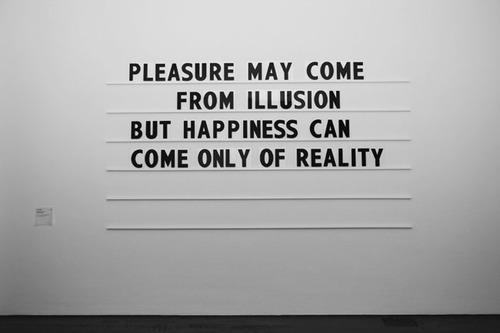 *I have decided to use this piece as my polished personal, not the piece I previously posted.

Dependency on Illusions due to a Lack of Truth in Reality

What do these texts suggest about the ways in which individuals respond to the conflict between illusion and reality?

Text Used: An excerpt from Jane Urquhart’s The Underpainter, that focuses on the protagonists response to a criticism of his paintings.

Often times, individuals are forced to respond to the conflict between their truthful, and often harsh reality and the illusions they had created out of ignorance, resulting in a state of denial, or further dependence on their illusions rather than reality so as to protect their sense of self – righteousness. It is not until one becomes self – aware and truthful to their reality that the blur between reality and illusion can be effectively resolved, restoring truth and reality as a dominant force in an individual’s life. This is exemplified through family experiences in my life that can be related to an excerpt of Jane Urquhart’s The Underpainter, a passage that exemplifies denial when confronted with a harsh, personal truth, as I have similarly seen in my past.

When I was about 12, I had found out that my brother had a girlfriend and did not tell my parents until a few years after they had been dating. For me, this was, though surprising as he wasn’t supposed to have a girlfriend, something that I did not think would create a large amount of turmoil in my family – unfortunately I was wrong. This was the beginning of years of fighting between my father and my brother and, though it is getting better, occasionally continues today. Similar to the protagonist in The Underpainter when he is told a harsh criticism of his paintings, neither my brother, nor father held themselves accountable to their reality until recently; rather they preserved their illusions through ignoring the truths they had faced, each attempting to preserve their dignity. While Urquhart’s protagonist was forced to face the conflict between his reality and illusion (that his paintings were flawless)  when he was confronted with a criticism of his art, that his paintings were “as cold as ice,” as Rockwell, the critiquer had stated, both my brother and  father were responding to their own conflicts between their illusions and the reality  of what had occurred – my brother, in his illusion that everything would be okay after keeping a large secret that he knew my parents would not be happy with, and my father in his illusion that my brother would, after recognizing how large of a problem this was for our family, end the relationship. In my own illusion, I disregarded the reality I face for a more favourable outcome – the fact that my family would face some hardships as a result of this conflict. As both my father and my brother, at this point in time, lacked the accountability they had to the truths of their reality, they chose to live within their conflicting illusions, as did the protagonist in The Underpainter.

If an individual, when in response to conflict between reality and illusions, becomes accepting and recognizes the truth, their dependence on their illusions will diminish to the point where their true reality is predominant in their life. However, in the protagonist’s, and my brother and father’s case, this is not true.  It is in this sense that a state of denial had been reached, thus allowing them to further lack an accountability to the truths of their reality as exemplified through the protagonist’s reaction to  the criticism. Rather than becoming self aware and holding himself accountable to his reality, the protagonist became angry and externally, though not internally, denied the possibility that his paintings were cold. This is evident when he thinks “They were completed. And they were flawed…” – internally he acknowledges his reality, though externally, as showcased through the protagonist lashing out at Rockwell, he denied his reality so as to preserve his dignity. Likewise, my brother and father completely disregarded the reality of their circumstance for more favourable illusions, thus showcasing their states of denial, again only externally – they did their best to portray a facade of a perfect father – son relationship, though internally they knew their relationship was far from ideal. As they had yet to recognize their reality and hold themselves accountable to the truths they faced, such as the fact that my brother should not have lied nor kept that secret for so long and that my father should not have overreacted, they were forced to be kept in that state of denial. This was evident through their continuous fighting, each defending themselves and their ill-conceived illusions.

Only now, four years later, have my brother and father come to terms with their replacement of illusions for their reality. Within the past couple of years, attempts have been made to not only recognize, but understand these truths and not live within the scope of their conflicting illusions and reality. For instance, my brother had held himself accountable for the poor decisions and actions that he had made, something that initially, his illusions – that he was in no wrong and that everything was fine – obscured from his view of reality. This allowed him and his girlfriend, now fiancee, to recognize the reality of the situation they face with my dad, who is also working to recognize the true impact of his actions on reality – it was not just my brother who was in the wrong. Furthermore, the amount of fighting has decreased, thus resolving most of the conflict that their illusions and the reality they faced created. In regards to The Underpainter, Rockwell had stated that “[he] was doing [the protagonist] a favour” by critiquing him, but the protagonist’s illusions and ego shadowed all realization of this truth. Now, as seen through the dissipation of conflict between my father and brother, it is evident that when illusion is confronted by an acceptance of the truth of one’s circumstances, one is able to live a truthful, unconflicted life as a result of living in, and being accountable to, the reality they face.

Illusions are often shields to the harsh truths of reality, though when one becomes dependent on living within the realms of their illusions rather than reality, great conflict is created. As showcased throughout the tensions between my father and brother and the lack of acceptance by the protagonist in Jane Urquhart’s The Underpainter when he is confronted by reality, one’s ability to respond to conflict between reality and illusions will only be successful if that individual becomes accepting of the truth of their circumstances, regardless of the impact it has on their sense of dignity or ego. If not, a state of denial, in which one favours their less truthful illusions to shield their dignity and difficult, yet true, reality, is inevitable – the cessation of living in one’s false illusions is only possible with the recognition and accountability to the reality an individual faces 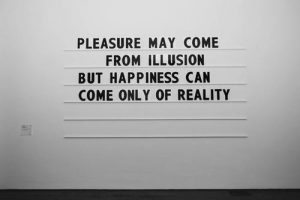