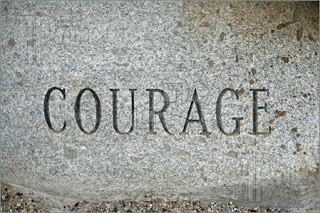 It is in the small things we see it.
The child’s first step,
as awesome as an earthquake.
The first time you rode a bike,
wallowing up the sidewalk.
The first spanking when your heart
went on a journey all alone.
When they called you crybaby
or poor or fatty or crazy
and made you into an alien,
you drank their acid
and concealed it.

Later,
if you faced the death of bombs and bullets
you did not do it with a banner,
you did it with only a hat to
comver your heart.
You did not fondle the weakness inside you
though it was there.
Your courage was a small coal
that you kept swallowing.
If your buddy saved you
and died himself in so doing,
then his courage was not courage,
it was love; love as simple as shaving soap.

Later,
if you have endured a great despair,
then you did it alone,
getting a transfusion from the fire,
picking the scabs off your heart,
then wringing it out like a sock.
Next, my kinsman, you powdered your sorrow,
you gave it a back rub
and then you covered it with a blanket
and after it had slept a while
it woke to the wings of the roses
and was transformed.

Later,
when you face old age and its natural conclusion
your courage will still be shown in the little ways,
each spring will be a sword you’ll sharpen,
those you love will live in a fever of love,
and you’ll bargain with the calendar
and at the last moment
when death opens the back door
you’ll put on your carpet slippers
and stride out. 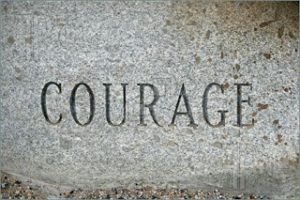 Discuss the idea(s) developed by the text creator in your chosen text about how acts of courage develop and nurture personal integrity. (June 08)

The Foundation of Personal Integrity; Courage

Often times, individuals find themselves in morally compromising situations, ones in which their personal integrity, or their ability to act per their own will and beliefs, encourages them to do what they believe is right, while external factors encourage them to act in accordance with what is expected or thought of them. Courage is the manner in which one is able to identify their abundance or lack of personal integrity and thus implement change so as to develop said personal integrity Those whose actions are dictated by the latter lack the courage to live a life aligned with their own moral principles, the courage to disregard any influences that cause this misalignment and prevent them from living a fulfilled life. Anne Sexton’s poem, “Courage”, explores this idea in great depth, exemplifying that the little things in life, the things that seem obsolete, are often the ones filled with courage – they determine and are present in actions that dictate how we live our lives with personal integrity and therefore determine one’s ability to live a fulfilled life.

In order to begin to live with personal integrity, one must have the courage to disregard any external influences that aim to dictate the way in which we live our lives, that aim to deter us from our moral alignment, or completely abolish any significance we hold to the morals that we live our lives according to. This idea of constantly disregarding any influence that would otherwise cause great moral disruption, and therefore result in the lack of development of personal integrity, is shown throughout Sexton’s poem, though I specifically resonated with stanza one in which the speaker states, “When they called you crybaby / or poor or fatty or crazy / and made you into an alien, / you drank their acid/and concealed it.” (lines 8 to 12) In relation to my own life, I am able to sympathize with those who have had to “drink [the] acid [of others]” and “conceal it,” as well as how the courage from concealing the “acid” nurtured my personal integrity, the ability I then had to live my life according to my own moral instructions through my experiences with bottling up my emotions after being made fun of  for years.

As a child, I had always been considered to be very quiet and was often alone – this concerned some of my teachers, though I had no issues with it myself, and still do not. In later years, I found that others my age assumed that they could take advantage of me because of my quietness. Initially it started out with small things such as teasing that became a daily part of my life, something that I regarded as normal – I thought that the excessive teasing I endured was just a part of everyone’s life; it even continued at home. However, this escalated in grade seven I was no longer the subject of verbal tormenting, I was, though I did not realize it at the time, being physically targeted as well, and by those who I had thought were my friends. Grade seven marked the year that I had truly realized that I held no personal integrity – how could I, someone who truly believed in independence be so weak and hypocritical as to be dependent on so called friends who hindered the implementation of these beliefs in my life? I had recognized the fact that our relationship was not healthy when my seventh-grade teacher had pulled me out of class to talk to me about this. Within reading “Courage,” I was able to realize why I had no personal integrity – I, at the time, lacked the courageous mindset that would have allowed me to pursue a life in which I felt was fulfilling, one led by my own personal integrity. I was, through bottling up my emotions, essentially disregarding the fact that I felt this way and not dealing with the underlying problem – the fact that I was vulnerable because I lacked the courage to advocate for myself – and found that I was the pushover everyone regarded me as. The ability for one to overcome these “sorrows”, as depicted in “Courage,” through not concealing them, but through directly dealing with them by reflection followed by action, greatly impacted me in acting on this revelation.

As read in stanza 3, courage is the ability to commit acts that one deems right, acts that are true to one’s self, and in order to allow this to occur, one has to “[powder their] sorrow…[give] it a backrub” and “after it had slept a while… [it would be] transformed.” (lines 32 to 37) While I had “swallowed the acid,” Until later years, I had not had the courage to come to terms and recognize my “sorrow”– the act of courage I was lacking that was essential to the development of my personal integrity. It was this that acknowledgment of the lack of personal integrity present in my life that caused me to act on it. In grade 8 I was able to look back on my seventh-grade experiences and realized that they, indeed, were anything but memorable – I had now found the ability, the courage, to “powder my sorrow” or to allow it to be truthfully recognized and accepted. “Powdering” and “rubbing” my sorrow so it could be transformed was the exact opposite of what I had been doing – concealing my true emotions as a means of essentially denying that others actions hurt me so as not to seem weak made me weak and uncourageous – I was denying reality. Through the actions Sexton presented in her poem, I was able to transform and accept my negative experiences so as to move on with them and start to live a courageous life where I no longer put up with, nor hid, personal injustices. Put simply, I had learned to love and accept these negative experiences to grow from them, to nurture my personal integrity. I had achieved this through personally coming to terms and reflecting on my experiences – what use was feeling hurt and victimized if I was the one who had let others get to me and impact me in this way? With this, I was enabled to cut off all poor relationships in my life and advocate for myself in future situations to transform my experiences as I had before. Presently, I am still teased, though I am now in control of how it affects me and the extent to which I allow this teasing to endure. This transformation allowed me to develop my personal integrity, in which I sought to live my life based on from that moment onwards, as evident through my decisions to move on from my negative experiences and to not allow them to reoccur in the future. This realization of personal integrity was as a result of the courageous actions depicted in Sexton’s poem. I had done a seemingly little thing, reflecting, which led to small actions, though they were filled with courage.