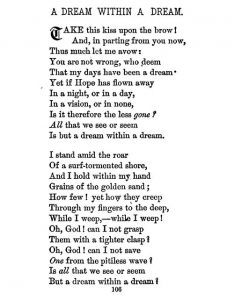 I am not unbreakable–

that much I know now.

I’ve never been one to sit in shamed silence,

slowly following the rest of the crowd.

I am not untouchable,

this I know for sure,

for it always seems that I am lost somehow,

like I’m constantly being swallowed whole by the floor.

I am not undefeatable,

I wear mine scattered like ashes in my hair.

But Alas, I am not unbreakable–

this is what I know;

I am a creature carved from ice,

my heart is buried beneath a shroud of snow.

And despite the way I act–

how I believe I cannot be  hurt,

I am a compulsive liar,

for I always seem to be picking myself out of the dirt.

I am not unbreakable,

this life is only but what it seems,

a dream within a dream.

My thoughts on A Dream Within A Dream:

Honestly, at first, (and even now), I truly had no idea what this poem was about. Like. Seriously. This is also a testament to my own idiocrasy, for I don’t even like Edgar Allen Poe, so why on earth would I ever do a poetry presentation on him by my own free will?

So, to begin, I think that ‘A Dream Within  A Dream’ questions the idea of reality being hard to grasp, due to the fact that we have so little time to actually attain this clear sense of what is real and what is not.

The idea of not having a clear perception of reality can be found in the first stanza, when the poet writes: “All that we see or seem/Is but a dream within a dream.” He is literally saying that nothing is what it seems, which makes it seem like, from the beginning, he is questioning his reality. Also, it seems that the first stanza is a goodbye between two lovers, so one could argue that the narrator is questioning whether or not their love was real if one of them is leaving the other, which could be reinforced by the lines, “Take this kiss upon the brow!/And, in parting from you now,/Thus much let me avow —-You are not wrong, who deem/That my days have been a dream;. . .”

Additionally, the fact that the above lines end in a semicolon could mean that what the narrator is about to say next is going to be something coming from feeling rather than logic, which could reinforce the idea that he doesn’t truly know what reality is.

With the second stanza comes the idea of time—specifically the imagery of ‘the sands of time slipping through one’s fingers’;

“I stand amid the roar/Of a surf-tormented shore,/And I hold within my hand/Grains of the golden sand —/How few! yet how they creep/Through my fingers to the deep,/While I weep — while I weep!/O God! Can I not grasp /Them with a tighter clasp?/O God! can I not save/One from the pitiless wave?/Is all that we see or seem/But a dream within a dream?”

One could argue that the ocean is a representation of Death, and so when the speaker is lament over not being able to save ‘one’ from the pitiless wave, this could speak to the idea of time running out, as is the same case when the speaker talks about the golden grains of sand slipping through his fingers. Another interpretation could be that the speaker is lamenting over the loss of loved ones, and as a result, he is now all alone in the world and no longer has anyone to call his own. This loss, could also reinforce the idea of nothing being what it seems, for the speaker may have thought that these loved ones would be his forever, but they are snatched from him by Death, proving that they were never really his at all. 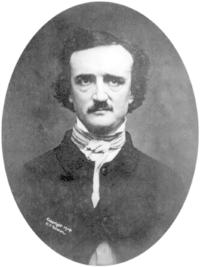 A Dream Within A Dream