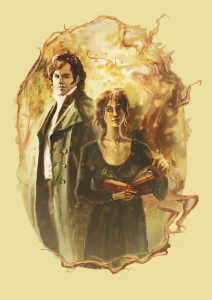 I have a certain admirance for one Mr. Darcy in Pride and Prejudice. Maybe it’s because I relate more to the guy – the brooding, silent type who, by the very least, means very well, he’s just oh so heavily misunderstood. Granted, he hasn’t done much, openly and publicly, to prove to people otherwise, initially, but I don’t blame him.

When we’re introduced to him during the first ball scene, he makes quite the grand appearance and does manage to grab people’s attention by his presence alone, though he cares minimally to hold the attention and he offers very little in terms of conversation; so very unamused and uninterested with the antics and propriety of the attenders to the ball. His prestige can certainly carry him anywhere, but he refuses to meet it halfway by being a gentleman to the men and women who choose to associate with him. Even going as far as to drive women away by giving more careless comments, like with his first encounter with Elizabeth. Such a case of going about leaves one with a reputation of being arrogant and overly prideful. Though I think Mr. Darcy would prefer to have such titles than let himself be hurt by someone whom he should let close, only to have them use him for his prestige and wealth. With his power, he could have the choosing of pretty much anyone as a bride, but he remains steadfast in keeping his manner to himself.

I think of Mr. Darcy as a more stable, rich, and grown up version of Holden Caulfield. Battling with the legitimacy and phoniness of the people around him. Because in a time like this, you could never really tell if someone had a distaste for you or was being completely genuine when it doesn’t matter anyway cause it’s all just the same. How can anyone tell the difference, apart from the subtleties, when everyone is meant to be proper and courteous during these functions? It raises the most deceptive of liars. All of which whom Darcy has a distrust for. Also for the reason that it’s all just so dull, and these people don’t seem to have any layers and continually convey an arrogance of their own. Live, marry, gossip, and don’t forget to be fancy. It’s all so bland when these have no depth apart from which outfit they should wear that really expresses their standards. Ergo is distaste for being around these people – they provide no stimulation and just seem so hollow with all their small talk and properness when it means nothing. I mean if you’re gonna hate someone, might as well hate everyone. In a way, you could say his aversion for society is part feminism. Equality and all that.

But to be frank, he is a person ahead of his time, much like Elizabeth. And to be compared to other men in this time, it shows. Take, for example, a Mr. Collins. I think of him as a good representative of the typicality of the males in this society. Driven and more or less self-serving upon his own reputation, his attachment and proposal to Elizabeth was a little less than… “romantic.” I mean it’s beyond me to speak on the behalf of a woman in such a case, but surely Mr. Collins isn’t exactly the kind of guy someone would dream about. The guy seems completely devoid of any morsel of emotion or passion – is he even human?
Even to which Darcy and Collins write their own letters to Elizabeth is wildly different. Collins little infatuation, I guess you could say, was entirely self-serving. For if he had married Elizabeth, he would have gotten his status bumped up – but to be rejected by her left him utterly flabbergasted. And went on in the letter, going on about himself for ages, and the bastard even said he’d forgive Elizabeth if she just came to her senses. Now, Collins is a bit of a brat who’s got a superiority complex. I suppose normal for this time and age, but he was certainly stunned when he got his rejection. Supposedly not used to not getting what he wants. What? Rejected? Me? How on earth could that have happened? I’ve the name, the race, the estate, and I’m a male. What more could you ask for? Such a Prince Charming. His superiority granted by his own title and status gives way to a nauseous kind of arrogance.

Meanwhile there’s Darcy. Also facing a rejection with Elizabeth, he too writes a letter for her. While also talking about himself, he instead targets the pathos within the letter. Giving his story and stating his intentions were pure and that he meant no harm. Darcy feels, and he realises that he certainly hasn’t come across that way, but he’s legitimate and genuine and wants of nothing but a true connection with someone. A relationship with a woman that he can’t find anywhere else and only with Elizabeth. None of this arranged marriage nonsense where there’s a slapstick bumper sticker label calling it “love.” Darcy’s a sensitive guy, and he wants of nothing but to feel for the one woman who’s ever let him get a grasp on his emotions. Something so real juxtaposed in a society of makeup and propriety. 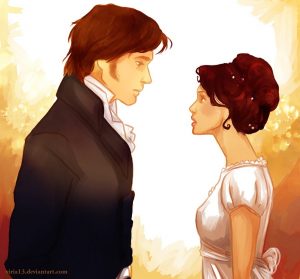 And you can’t really help but root for Darcy and Elizabeth getting together. (Only took 300 pages of fancy talk, but we got there.) From the moment they met, and unfortunately, they didn’t have that love at first sight moment, but hey, you know, I’m all about breaking those stereotypes even when those stereotypes haven’t really existed yet, but regardless. Instead, Darcy goes off and insults Elizabeth (I’m sure it’s not the worst first impression in the world, but it might be a contender), to which Elizabeth replies with a bit of her own sly wit. It certainly takes Darcy by surprise, and it really went to show in Elizabeth’s favour that she wasn’t a pushover and unlike most girls that he’s ever encountered. That slight interaction captures Darcy, very intrigued by this girl’s moxie and her sleight of tongue. And Darcy’s interest only builds from there, perplexed by this girl who was just so… different. His own equal. Elizabeth challenged Darcy, and honestly, what kind of guy wouldn’t be into that? What’s this whole sense of taming women into submission just so a man could fuel his own ego and status? There is none! Love is one of the most important things someone could chase after – it’s a means to a future and who in the right mind would want to squalor it to further their own agenda? (The treacherous kind, really) But it’s a grand thing to have someone who does challenge you and loves you the same. Someone who is intellectually stimulati

ng and can give you the chance to have an in-depth, poetic, and philosophical conversation with.

And it may be the simplest of things, but Darcy’s connection to Elizabeth is a soulful and a very intellectual one. They compliment each other greatly. And Darcy at last found an end to his bitterness and his reign of isolation during ballroom parties; for he’s by no means a man devoid of passion nor with a heart filled with selfishness – he’s simply misunderstood.

4 thoughts on “A Man Ahead of His Time”