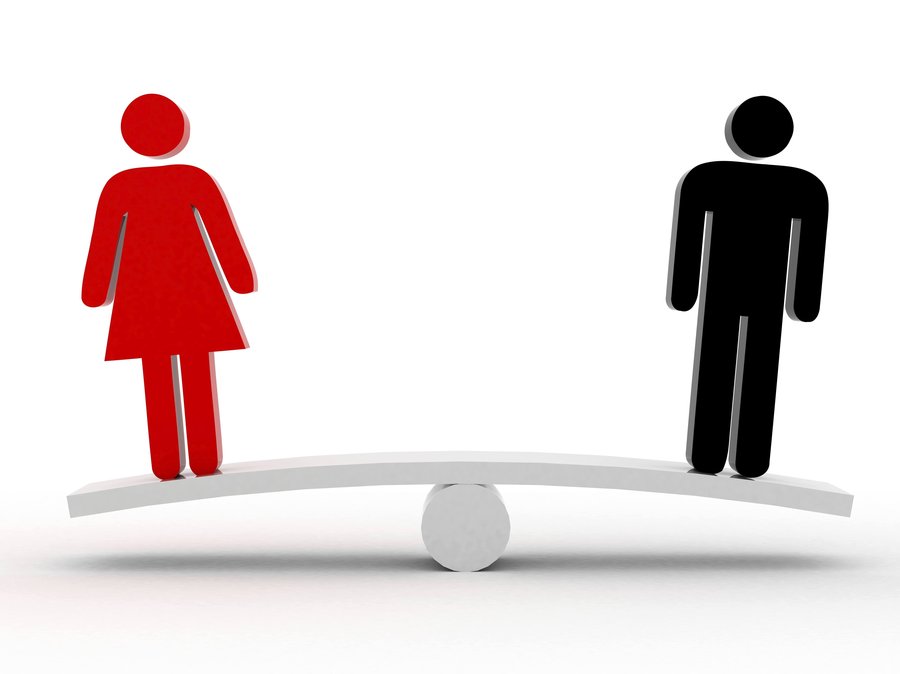 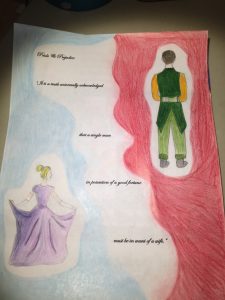 As readers can see, I have drawn a man and a woman in opposite corners of the page and selected the quote, “It is a truth universally acknowledged that a single man in possession of a good fortune must be in what of a wife.” from Pride and Prejudice (pg. 3). This quote introduces the concept of gender roles for men and women during the 1800s.

During that time period, men were considered superior over women, which was why I chose to colour the man’s arms orange. According to negative colour symbolism, orange represents superiority. I have also drawn his back turned away from the lady, and drawn him at a higher spot on the page to demonstrate the superiority men had over women.

As the 1800s progressed, men increasingly commuted to their place of work; they were the one who provided all the money and wealth in order to be at the top of social stratification. Men were physically stronger than women, and were considered to have a higher intellectual level. Wives, daughters and sisters were left at home all day to oversee the domestic duties that were increasingly carried out by servants.

The green coat the man is wearing symbolizes wealth and money, and going back to the idea of social stratification, men who inherited “old” money from the previous generations, were considered to be a “safer” match for marriage. Old money was secure and had a smaller possibility of bankruptcy compared to “new” money where men who set off on their own journey to make new money from gold mines, or becoming merchants, etc.  There was also a lesser chance of death; if a man died during his journey of making new money, the engaged lady would fall to the bottom of social stratification, and become a serf or slave.

Having wealth also meant that a man also had power; which is why I chose to surround the man in a red colour. Not only power, but red also represents strength, desire, energy, and passion. The stance the man is in, with his arm behind his back, represents authority, and also a symbol for power. A man who held himself tall would be a more suitable match than a man who slumped and did not have the correct posture.

A man was supposed to be secure, as mentioned earlier, which is why I drew him wearing grey boots. Grey represents reliability, intelligence, dignity, modesty, and maturity. These are all traits men were expected to have due to society’s conventions.

However, society’s conventions not only affected men, but also women. (Especially women) I have drawn the woman in the poster purposely at the bottom of the page, with her head bowed down and curtsying to the man, to demonstrate a women’s inferiority to men at the time. They were expected to marry into a family with great wealth to secure their status, be able to play the pianoforte, and be able to withhold conversations with guests, etc.

A women’s life was filled with expectations, and an “accomplished” woman would have fulfilled all of society’s conventions. I have chosen to colour in the women’s dress lavender, because it symbolizes femininity, grace, and elegance; all of which were traits of what women were expected to have.

I have also surrounded the woman with a light blue colour to represent the airs or auras they were supposed to have. Blue symbolizes peace, calm, tranquility, trust, and turquoise represents feminine appeal. To add to that, blond hair was considered to be the image of beauty, also applying to the idea of women’s expectations.

By using colour symbolism through out my poster, I have demonstrated the gender expectations of men and women during the time period of the 1800s.

2 thoughts on “Gender Expectations in the 1800s”