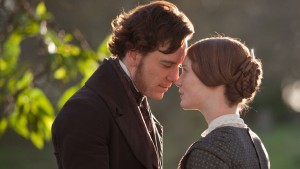 Reason and passion -two polarizing aspects captured in one novel, Jane Eyre; the author, Charlotte Bronte, dives into the depths of one woman’s life, Jane. Commonly referred to as a Bildungsroman novel or a coming-of-age story, the novel follows Jane’s life as she grows from an isolated ten-year-old orphan, to an independent and strong women. The novel can be separated into three distinct sections, Jane’s life at Gatesfield Hall with the Reed’s, her life as a student turned teacher at Lowood, and finally working as a governess at Thornfield and after. Famous for her complex and intricate sentences, author, Charlotte Bronte encompasses elaborate phrasing and a high level of vocabulary well above the vernacular at that time.

Jane Eyre is, by far, my favourite novel. Jane was ahead of her time, she was a strong woman who put hers needs before the wants of others. To me, Jane is inspiring, she is a role model. Teenage girls, like myself, can learn from her; we can learn the powers that come with being a woman, Eyre embraces feminism, a concept well before her time. During the 1800’s females were treated like slaves, they had little to no rights and the only thing they were expected to do was marry a man and live their life out with him. However, Jane did not do this, she stood up for herself, studied and worked proficiently, and  never let love sway her from what she wanted out of life. Jane Eyre is a classic, and often classics are full of complicated and out-of-date language, yet reading Bronte’s work wasn’t challenging, just the sheer enjoyment of the novel added to the experience of reading it. The language was, yes, complicated but through the author’s phrasing and general sentence structure following along was not hard. Living in today’s society I have been raised with the concept that men and women are equal and that both sexes should be treated the same. Reading Jane Eyre contributed to this mindset as Jane completely embraced the concept of gender equality; by reading it, one can transform into well-informed adults who understand what it is like to be a female growing up in a male driven society.

Personally, I believe that Jane Eyre is also a novel about the intertwinement of reason and passion that eventually results in the balancing of the two. Charlotte Bronte uses the clashing of the two persons to reveal one’s inner conflict; in Jane’s case it is evident that her passion consumes her as her behaviour is explained as “…shaking from head to foot, thrilled with ungovernable excitement” (40), however through the following lines Bronte intertwines Jane’s passion with that of logic: “You think I have no feelings, and that I can do without one one bit of love or kindness; but I cannot live so: and you have no pity” (41). Through this interaction the dynamic between Jane’s reason and passion is developed; however, it is clear that her passion has overruled her logic, thus resulting in her expulsion from Gatesfield Hall and -ultimately- her life with the Reeds. It is interesting to note that despite Victorian society’s view on women, that they shall only guide their decisions through the logic of their husbands, Charlotte Bronte chose to write about a female character who not only moved out of the spaces that were strictly male-defined but also chose not to fill her time with incessant domestic duties, in other words Bronte created an iconic feminist character that is ruled by both passion and reason.

Throughout the duration of the novel Jane’s mostly passion driven personality diminishes to that of only reason, this is partly due to the strict overbearing regimes at Lowood School and restrictions that stemmed from her gender, orphan status, and poverty. Following some time at Thornfield Hall the “fortune teller” tells Jane that, “The forehead declares, ‘Reason sits firm and holds the reins, and she will not let the feelings burst away and hurry her to wild chasms.” (260) moreover Jane states that, “ Reason not feeling is my guide.” (180) It has now become clear that Jane’s actions are now dictated by reason, almost as if she has succumbed to the limitations that society has imposed on her. However, through her rationality her strength is developed, as well, because she was able to remove herself from internal and external female conflicts such as choosing to leave Rochester and fleeing Thornfield Hall. Reason is evident when Jane leaves Mr. Rochester because she says, “ Farewell! Was the cry of my heart, as I left him. Despair added, farewell forever!” (105) Through this particular intertwinement of reason and passion Bronte is revealing how the two can produce conflicts within one person, Jane, but also within others like Mr. Rochester.

Jane Eyre finally finds a balance between her reason and passion at the end of the novel as the ever-present conflict of the two has ceased with the passage of time and as a result of her experiences with the Reeds, Lowood School, Thornfield Hall, Marshend, and finally back to Thornfield and her cherished Rochester. Jane has achieved an aspect of clarity between reason and passion through the attainment of emotional logic combined with physical logic. The end of the novel is not full of extreme emotional rekindling but of a deeply felt sentiment that speaks to the convolution of Jane and Mr. Rochester’s reason and passion, this is obviously in juxtaposition of the traverse range of emotions explored throughout the novel, prior to the ending.