“I’m going to run away to Alaska,” she told him.

He looked the way a kid does on Christmas morning, like each thing she told him was a tiny secret wrapped in silver boxes with red ribbons, meant only for him to hear. He made her feel like everything she said was important.

“Why Alaska?” he asked her.

She paused for a moment. Something flickered in her cold eyes as she looked away from his warm ones. She studied his worn out red converse. Memorized each scuff and mud stain, and noticed how he didn’t thread the laces through the top eyelet.

“Because,” she said, “I like the cold. I like the idea of having a small house with white floorboards and blue walls at the edge of the woods. I would get a job in town in the local bookstore. I’d stock the books on the shelves, and I’d leave little notes in some of them, things like the colour of your eyes or the way you laugh at your own jokes. And when no one was looking, I’d hide amongst the books and read until I got caught for the third time that week. In the winter, I’d write by the fire side while wearing my favourite grey socks because my feet are always cold, and in the summer I would fall asleep on the porch after stargazing. In the morning, I would watch reruns of ‘Friends’, laughing like it was the first time  I’d ever seen the show even though we both know that I can quote every episode word for word. I’d go for walks in the evening and get lost in the woods behind my house. I wouldn’t know anyone, but everyone would know me because they’d never had a stranger move there before. I would be free.”

He watched her quietly. Observed the way she spoke with stars in her eyes, and snowflakes on her breath.

He knew she would never be his. Not really. The truth is, he didn’t think she would ever truly be anyone’s. She was her’s. Her own person, patched together with the nothings and everythings of the world–like a fleeting thought; there one moment and slipping through his fingers by the next. She was a storm of a girl. And, he had always known that.

They were silent for a long time. They inhaled each other’s exhales, and filled the empty space with conflicted thoughts and supressed words begging to be spoken.

She rolled her eyes.

“Maybe you could come with me. If you wanted.”

He smiled and studied her hands. 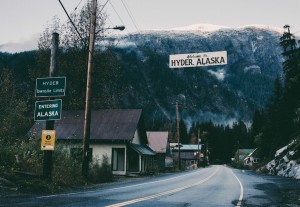 Please don’t say you love me, because I might not say it back.

2 thoughts on “Dreaming of Alaska”