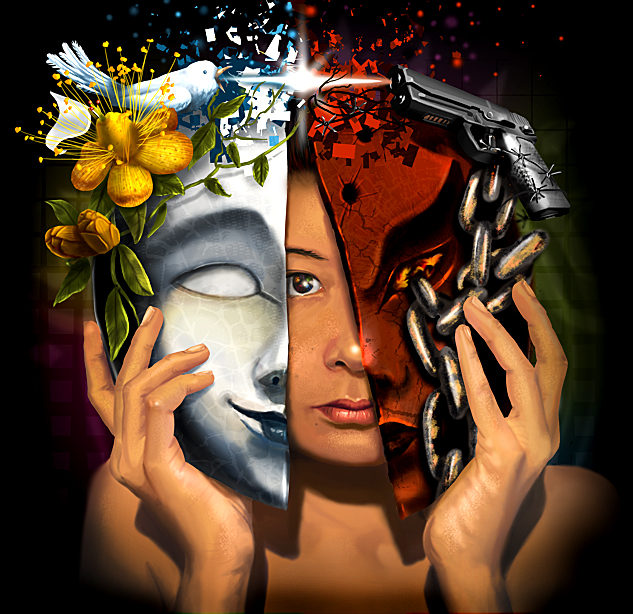 “The villains were always ugly in books and movies. Necessarily so, it seemed. Because if they were attractive—if their looks matched their charm and their cunning—they wouldn’t only be dangerous. They would be irresistible.”― Nenia Campbell

Richard III is inarguably a sly, selfish, and conniving cripple of a man. Richard III himself states within his own opening soliloquy that he is a villain. This statement is absolutely true; but what does that make the audience? They are irrevocably drawn to Richard’s aura, even though he is a “villain.” So what exactly makes people so enraptured by the things that should disturb us? Why are unhappy conclusions often more effective on human emotions? These are the questions that came into my mind when I started to ask myself why I was so fascinated with this particular character, and this particular play.

The truth is, the best of plays are not those that have happy endings, or those where the hero archives every goal he sets out for himself. The best of plays – the best of literature in general, even – are those that exhibit reality. And the reality is that humanity is extremely flawed – a cliche, yes, yet a cliche so undeniably true. We can indulge in works where everything turns out okay, but we must know that such literature is not exemplary of real life.

Furthermore, Richard III is a Shakespeare play and it must be taken into consideration that the plot line is not very realistic with regards to what life is like in modern society. But the ideas, the glimpses of what makes Richard III tick, are what the audience craves to see. There is no denying that this character is extremely intelligent, and he is (especially so) when manipulating every other character in the play. I believe that many people find antagonists captivating because they exhibit the characteristics we would not want to be exposed to in real life. The majority of Shakespeare “die-hards” don’t want to be as selfish as Richard III, or as zealous as Hamlet. But getting the opportunity to see these characters portray these virtues we don’t want to see in ourselves gives us a broader knowledge of the human condition. We are not perfect, and I believe that somewhere, every once in a while, we all see a Richard III in ourselves. I would offer that everyone has the capacity to become a villain, just as Richard declared himself to be, but we need the fictional villains to show us what can happen when you succumb to the darker side of yourself.

From infancy, we are groomed to identify the villain as the moustache-twirling, scar-ridden man who notifies everyone of his presence with an outrageously evil laugh. As we grow older, we start to observe good and evil as a spectrum, and not as two different sectors. It is true that Richard III, in his characterization, is not very attractive – but an antagonist with only appearance-based villainy does not compare to a villain whose insides are just as ugly as his outside. For a long time, I have had a special sense of curiosity for the villains of the literary world. I am a strong believer in redemption, and in the belief that individuals are not born inherently evil. Rather, it is the choices we make and the paths we are lead on that influence where we fall on the spectrum. For an antagonist, the hero’s demise is their victory, and their “evil plans” are their personal ambitions. Everyone makes these choices for a reason, and Richard III (like many Shakespearean characters) led himself down the path to ultimate power, but was sabotaged by his own greed and guilt. The need to have power is somewhere in all of us – whether it be power over other people, power over the mind, or power over one’s own actions. Personally, I am fascinated by his downfall because it is a representation of the bad that can overcome oneself until you are too far gone to recover. Especially in the scene wherein Richard III has his cathartic nightmare, the audience is able to relate and sympathize for the character because we know that yes, he acted out of his own self interest, but he was human enough to feel guilt.

The reason why many of us – including myself – are so captivated by the antagonist is because it is sometimes easier to relate with a character who does not always do the right thing. There is not a single person in the world who has not done a wrong, and so we are more easily connected to those who are flawed than those who aren’t. Of course, not all characters are completely relatable, especially those who have committed atrocious crimes, but their emotions are. For it is the emotions present in all of us that keeps us coming back for more flawed characters every time we pick up a book or sit down to watch a play.

2 thoughts on “To Prove a Villain”