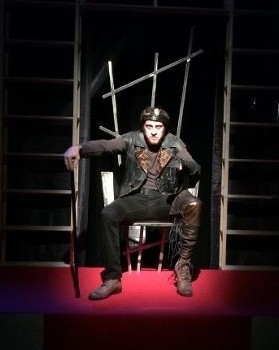 I honestly did not know what to expect from a production of Richard III, so I, like my usual problem-solving self, decided not to have any expectations – essentially, I tried to not to hold any preconceived notions so I could see the play in the most objective way possible.

Shakespeare’s histories were new to me and, while the story was intriguing, I didn’t understand why everyone was so eager to see this “Haysam” person (I learned something then: never assume that it’s just a play when an entire AP class is excited to see it.)

Looking back, I can’t even fathom why I would have ever thought that. Watching the play come to life at the Vertigo Studio theater made it into a true experience – a very enjoyable one.

Now I will not even attempt to be impartial. After all, this is a review – I don’t have to be.

The play begins with a soliloquy, in which Richard III (Haysam Kadri) announces his villainous intentions. We are quickly absorbed by the bloodthirsty thoughts of Richard, which are juxtaposed with his pleasant interactions with his brothers Clarence (Elinor Holt) and King Edward (Jason Schneider). He wants them both dead.

Richard woos the recently widowed Lady Anne (Amy Burks) over the body of the dead king – a rather aggressive tactic, but  effective. 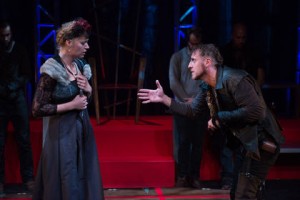 The power-hungry Duke of Buckingham (Kevin Corey) and Catesby (Brianna Johnston) both aid Richard in his quest. Through manipulation, deceit, and several murders, Richard ascends to the throne.

He then kills his two nephews and Lady Anne, and tries to marry his niece, Elizabeth.

All of the people Richard murdered appear in his nightmare. He is killed in a battle against Richmond, who is then crowned King Henry VII.

I found that two characters particularly stood out in the play: Richard III and Queen Margaret.

Richard is one of the most compelling villains in all of Shakespeare’s works, and this is only enhanced by Kadri’s performance. We see that, despite his deformed leg, Richard is fairly nimble – this hints at his misleading nature. The portrayal of his flaws and regrets in the production make him almost relatable, and, at times, perhaps even likeable. Seeing how his performance captivated the audience only proves that Kadri is a true expert in villainy.

Throughout the play, Queen Margaret curses the family that killed her husband and sons. Girgis’s depiction of the bitter queen is chilling; her presence haunts the stage and the mind’s of the audience. As a woman, she lacks political power; however, that is offset by her curses. Queen Margaret is the embodiment of all the suffering that happens as a result of the horrible actions that characters take. Girgis was an ideal match for the role because her acting was unsettling and eerie.

A few of the smaller roles in the production were somewhat uninteresting. The contrast between their acting and that of characters such as Richard III was quite stark. It was somewhat disappointing, but perfect acting is very elusive – overall, it did not detract too much from the play. It only “poked holes” in the immersive experience created by the other actors. The same can be said of some of the clothes – they lacked the same care and planning put into the other costumes. I think that they could have been more true to the time period.

I found the set design to be very interesting. The change in lighting and focus on Richard was an excellent way to show his inner thoughts. I think this added to the almost surreal effect created by the music and sounds, particularly at the start of the play. The crooked throne and pillars on the stage matched well with Richard’s deformity and the nature of his ascension to the throne. The use of fog in the dream that Richard was effective and added to the mood of the scene. I liked how the flags that were projected onto the backdrop at the ending of the play merged – that visual represented what was happening onstage. The incorporation of props was very smooth; I distinctly remember the variety of ways that benches were used, as well as the sickening “thump” I heard when the sack with the head inside was thrown.

For overall enjoyment, I would give this production a 9.5/10. Despite some of the slight flaws that I saw, Kadri’s acting had me absolutely ensnared. I could tell how power-hungry and ambitious Richard by just watching him. When the actors become their role, nothing else matters as much as the characters. I find that this is the most important aspect that I look for, particularly if plays have complex characters like Richard III.

Director Ron Jenkins hit the nail on the head with this play. I loved it.

4 thoughts on “Review of Richard III”