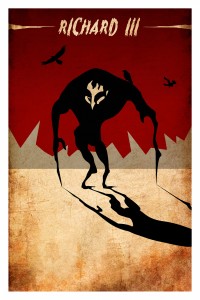 Having seen Richard III performed by the Shakespeare company, I can now say that I am a very big fan of this play. Initially when I actually read it, I absolutely hated it because I found it to be boring partially because of the length and partially because I didn’t read it with a translation and therefor found myself not understanding most of it. (Not to mention I read the whole thing in six hours, which is quite a feat in my opinion.) I found it to be stereotypical of Shakespeare’s writing and far too lengthy to properly enjoy.

With that said, actually seeing the play performed on stage, my perspective has altered entirely–Shakespeare’s plays truly were meant to be watched and not read. I found that I thoroughly understood and enjoyed the play upon this viewing, and in a sick, twisted way fell completely in love with Richard III himself.

I think this new found passion for this murderous, perverse villain largely comes from the fact that I would argue that something about other people’s pain, and something about the wickedness of villains is addicting. I found that I was enraptured with Richard from the moment he opened with the famous soliloquy “Now is the winter of our discontent. . .” and from that point on was strangely attracted to this evil being. This attraction wasn’t in spite of his villainy–it was because of this villainy that I found myself mesmerized with Richard–the more murders he committed and the more twisted he became, the more I was seduced by his dangerous charm and carelessness for the value of human lives.

Thus, through this play, I discovered a world which we all live in at some point or another, yet are perhaps too embarrassed to admit to–a guilty pleasure. A thrilling escape; the world of being romanced by the perversions of others. In this case, I was charmed into seduction by Richard’s perverse mind and persona. I found  him to be very raw in his desires, and there was something disgustingly erotic about Richard as a person. It is not so hard to believe that he was able to seduce Anne after the death of her husband, for he was so revoltingly alluring.

When I went home after watching this play, I couldn’t stop thinking about why Richard, despite being grotesque in both form and mind, was able to make the audience fall in  lust with him. I have come to the conclusion that part of the charm with Richard was in fact, his disfigured form–this speaks to the idea that other’s perversions can be enticing to us for purely the thrill of getting to be part of that perverseness, if even for a very short time and indirectly, in the case of the audience viewing the play. Something about watching a (I would argue) psychopath is incredibly thrilling, for he took pleasure in the pain and death he inflicted upon others which is oddly exciting in a way, for we love to watch others do the things that we’d love to do but never could. Something about the idea of getting pleasure from other’s pain is disgustingly alluring in the sense that you are in complete control and have all the power and everyone is merely just a piece on your chessboard–they must do anything you say.

There is something very attractive about having a love affair with something perverse. I suppose people always want what is wrong for themselves simply because it is wrong–like reverse psychology. I loved how irrevocably and unequivocally bad Richard was. There is also something very alluring about charming men doing bad things–at least to me.

I can honestly say that this is probably my favourite Shakespearean play after seeing it live, and Richard III will be a character that I’m not sure I could ever forget. For that reason I think I will always melt at least a little when I revisit this play and this particular character.

3 thoughts on “A Love Affair With Perversion”