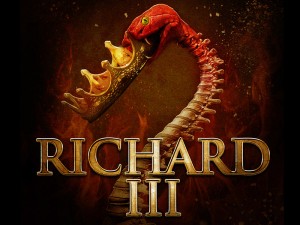 As of recent, I had the pleasure of attending Vertigo Theatre to watch the Shakespearean play, Richard III. I had never seen this play before, either in my reading nor being performed, and I must say that I was pleasantly surprised. The plot in summary goes along  as such:

As the previous King passes away, Edward IV succeeds him as ruler, and takes up the crown. His younger brother Richard III, whom is hideously deformed, plots to usurp the throne, “playing a villain,” even though he is the main character, followed throughout the play. Richard starts a discord between Edward and his other brother, George, whom is locked away out of fear he may kill the King. Following the murder of her husband, Richard somehow woos Lady Anne into a reluctant romance, afterwards secretly dispatching his brother whom was locked away, despite the King’s pardon. After Edward becomes ill from this event, Richard then locks away his brother’s sons in the same tower, executing others who dare oppose his quest to take the throne. After being crowned, he has the two princes he locked away murdered, his wife killed, and then plans to marry Edward’s daughter, Elizabeth, to strengthen his claim to rule. Many nobles flee the country to join Henry Tudor, whom arrives soon after for war against Richard. The night before the battle begins, the ghosts of Richard’s victims haunt him, forewarning his death. Henry defeats Richard in combat, and is crowned Henry VII, uniting the warring families to an age of peace.

The story of the play, to me, was very appealing, as it almost reminded me of the medieval themed hits and blockbusters you see on screen, such as Game of Thrones. The story encompassed scheming by an evil mastermind, and many plots of murder. I do not believe that the character of Richard III was truly evil, even though the blood is on his hands for the deaths of many royals. Towards the end of the play, we see him begin to regret his actions, feeling some remorse and a shred of humanity becomes apparent. Richard III is definately one of the most fascinating characters in literature

At Vertigo Theatre, there were many pros and cons to the performance, that both added and took away from the experience. To begin, the acting in the show was hit or miss; some had and understood their characters; others, not so much. When an actor is able to to fully become the character, they are able to appeal and amuse the audience. Take actor Haysam Kadri, for example, as he was able to thoroughly become the character of Richard III, making the audience laugh, gasp, and bring about emotion. This drew in viewers to the show, as their attention was drawn to the stage and the story at hand. However, some actors fell flat, as upon watching them you realized that it was just a show. Whether this be from forgetting their lines, or just plain over acting, it took away from the story and the experience. Some characters were also nonessential to the plot, and felt like they were added to simply give the actors more stage-time; otherwise, they could have easily been cut out and the plot would remain the same. 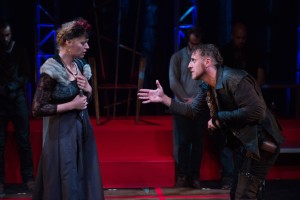 (Above. Haysam Kadri as Richard III and Amy Burks as Lady Anne.)

The stage design, I believe, was very intriguing. The set was lit in varying spots, dimming in some areas and bright usually in the center, where majority of Richard’s stage-time was spent. This helped focus Haysam’s character as the protagonist of the play. Whenever Richard went into an aside or monologue, the lights at down center would brighten as those around would dim, leading to the effect of him being the sole speaker a the moment.  The backdrop consisted of a drape in which different backgrounds were projected onto, such as rain, and the flags of the Houses. Slightly ahead were metal pillars used for the structure of the stage; the zigzag of the metal added to the stage, that when combined with the crooked and broken thrown, made the stage look amazing. A classmate of mine even described it as a “spider web,” tying together the overall themes of deceit and betrayal. The use of benches was splendid, as they were used for sitting, as beds, gallows and even as horses towards the end of the play.

I had a particular problem with the costumes adorned by the cast, as those who were not essential to the plot had nothing goo to wear. They was a man even wearing a leather biker jacket, and this play is supposed to set around the mid-late 1400’s!

Towards the end of the production, there was a fight scene involving swordplay, that I believed to be well choreographed, though there were some moments where one character would block before the other’s attack was even telegraphed.

Finally, I enjoyed how the cast was after the play. As we stood in the lobby, each cast member came out and was applauded my the class, each being humble for their acclaims. It takes a very well mannered and trained actor to be able to take on such a serious role and still come out as a relatable human; that’s exactly what this cast was able to do.

Overall, I enjoyed this play, as I was driven by the main characters who stole the show and otherwise drowned out the flaws I noticed. It was refreshing to see the cast consist of women playing men, as Shakespeare’s original works had men play the women, along with all other roles. Combining the aspects of the play together, I can honestly rate the production a 8/10. It wasn’t the best play, but , nevertheless, I was still captivated.

2 thoughts on “Richard III, a Review.”