“i don’t even know who you are anymore,” you tell me.

“oh, but i think you do,” i reply. “and i think that you are afraid of what you see;

i can feel that i have changed. i can feel it in my bones the way the sky can feel a storm–i have changed. i am no longer the pale, fragile, wide-eyed girl who would clench her hands into fists in her pockets when she didn’t agree with something, and i have grown out of biting my tongue when i have something to say. because, i used to be afraid of saying the wrong thing, and yet i always managed to say it anyway.

the girl i used to be was the girl that everyone else wanted her to be. she was a magician who had perfected her vanishing act long before she was born. her first act was hiding her heartbeat from the ultrasound technician when she was still in her mothers womb, her second was disappearing from that womb two months before she was due–both were acts that she nearly paid for with a life that she felt she had never earned.

so you see, she learned to shrink from a very young age, deteriorating more and more with every breath she took, she learned that this world likes its people small, and its women even smaller. maybe that’s why when she grew up she became a master of disguise, camouflaging herself in false smiles and the glow of the distant moon hiding the bitterness in her eyes as she tried to fall asleep. she took to avoiding mirrors and scales, anything that would make her something more or less than she was supposed to be, because she was afraid she would become the person who no one would want her to be–a person of her own creation with thunderstorms for eyes, and lightening on her tongue. she only ever wanted to be what others told her to be. she strung these expectations on a silver chain and wore them around her wrist, looking more like a shackle than a bracelet, always adding a new charm when one came her way. they were reminders for her, little flaws or imperfections that others had pointed out to her ‘for her own good’, like “no one likes a girl with opinions”, or “you’re not allowed to cry because it makes others uncomfortable”. it really couldn’t have been all that good if all it did was wipe her feet out from underneath her and snatch the breath from her lungs. whenever she glimpsed these faults within her being, she worked so hard to make them disappear that eventually, she disappeared too. she had performed the vanishing act so many times that she became it.

that was the girl you knew. 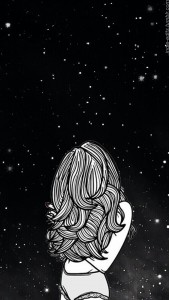 2 thoughts on “the vanishing girl”