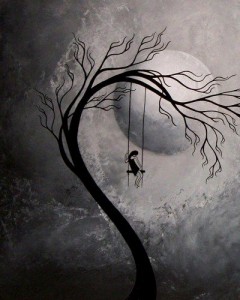 Her mother yells at her, her mother physically abuses her. But she endures, for she isn’t presented with searing pain where one envisions black dots within the fronts of their eyes. No, the slap stings and burns, the punches bruise and momentarily restrict airflow. But yet that is not what causes her pain, she seeks freedom; she seeks her validation. Yet her mother’s eyes remain clouded. She slowly withdraws, unable to speak for the hatred develops. Distance becomes greater, her mother begins to worry, let her. Let her. Oh let her.

Do you not understand, oh you battered soul?

Her mother, brought up within the depths of poverty. For all she every dreamed of was the possessions and riches the Americans acquired. Her greatest uncle, living within his shack encased with mud, was a traveller of this distant land. She, as a child, would eagerly listen to how he roamed within its pleasuring bounties. Her bright eyes began to envision houses conjured of gold and blue airy heavens. She momentarily forgot the smoke and smog that clouded her skies. Her little mind was a diamond that slowly got encased with layers and layers of grime she desperately sought to rid upon her ragged clothes. Her bright eyes became leaden. Money seemed to be the “out” of poverty, education- the only opportunity for this unfathomable dream.

Her brother would speed on his bike to school. She would eagerly await for him and present him with a warm piece bread, for now they could afford a house of their own, they paid him to study. What jubilance. She would quiet the children screaming upon the roads. Without a care, they would chase each other and get into mindless trouble. Their fingernails encased with dirt, overgrown hair, and battered clothes. “Fools,” she would mutter, “they are senseless.” She spoke to them upon how her brother was studying, to be a doctor. “One should not disturb such studies,” she said, with a daunting pointed finger.

Her wistful gaze caused the children to stop and listen. “He will earn the most money ever seen; create a palace that consists of gold walls and bathrooms and rugs, for he will do it,” she fervently insisted. The children grabbed her hand, “Aunty,” they said, “Here is our palace.” A few steps ahead they pointed. A miserable hut with no roof, it had sticks for walls and decayed leaves for carpet. She laughed and trampled upon the house they made, tears blossomed within their eyes. She hushed them and told them, that the house of gold her brother would create would never break, no bullet could ever etch it, and it would glisten so radiantly that one could see their reflection upon its surface. A contemplative look coated their eyes; they were going to have a gold palace too. She let them believe, though she never did, for they could never reach the surmountable success of her brother. But you let children believe in such frivolous things. She walked towards home, with bounce in her step. Unaware of the seed she’d rooted within their innocent minds, but she too had been a victim. This story was whispered and shared.

You don’t understand. That dream of yours, your parents never shroud it, they just never did understand. They desperately want you to be residents of glory, accomplish all they could not. This dream lives on. It’s rooted within you now. But you have the power to combat, a chance they never were once given. You have opportunity, which they never once did receive. When their innocent minds were glossed with money it became their most desirable cuisine, their starved stomachs craved for food that never did satisfy, yet they continuously consumed, never realizing. Yet you do, the world works differently now, compared to as it did back then.

You do not understand, yet distance yourself, create a barrier. Your mother loses her mind, her grief causes sickness. Yet you watch with a sardonic smile on your face. Now she understands. Let her.

You become the darkness, it swallowed her whole once before. But you are her child, you, her only light, it diminishes within the fronts of her vision. Go ahead, accomplish your dream. While your mother, she lies on the floor, her starved lungs now aching. This time, all she ever needed was you.

I am not saying, do not achieve your dreams, I am saying don’t forget about the hands of those you once wrapped your nimble fingers around the first time, the ones who silently blew prayers over your ahead when you were asleep, the ones, that when you were born, solely lived for you.

They may never understand, but please never forget, their world became engulfed with wonders when you were born. Do not deprive them of the awe and thrill that is you. Their perceptions, are simply what they were born into; told to believe.

We now seemingly understand, yet fail to understand them.

*This entry was based upon novels that I have read upon individuals who are from immigrant families and are living within first world countries, and the frustration that constantly nags at them. Through reading these novels I’ve developed the conclusion upon how it is easy to hurt someone you love to satisfy your anger, but the funny thing is, somehow you end up hurting worse. This is what I felt when I thought of these lost adolescent individuals, and the story ended up writing itself.

2 thoughts on “I Wasn’t Meant to Hate You”