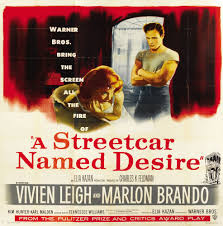 …the role self-perception plays when individuals seek to reconcile the conflict between illusion and reality.

How one perceives themselves is often their downfall—for nothing tears a person apart more than their aspirations to become something they are not. One will create an illusion to bring themselves closer to this vision of divinity they have perceived themselves to be. Most often this vision is so far from reality that it becomes impossible for themselves to bring said reality back into their lives; instead, their illusion is ripped from their being until they are forced to see reality. In some cases, reality may be so stark that one is forced to resort to insanity in order to combat the effects of actuality. Before being disillusioned by the character of Stanley in Tennessee William’s play A Streetcar Named Desire, Blanche Dubois creates an illusion of beauty and seductiveness in order to retain her self-perception of Southern dignity and class. Through Blanche, Williams demonstrates the idea of how an individual, in seeking to reconcile the conflict between illusion and reality, will attempt to preserve an illusion in order to retain one’s desired self-perception.

Self-perception plays a key role in personal illusion—one will create an illusion in order to keep their self-perception a vision that they want to retain.  Blanche Dubois, once stricken with the loss of Belle Reve and the life she could have had, creates an illusion in an attempt to keep her previous life alive. In Scene 1, just after Blanche arrives at the Kowalski apartment, Blanche states:

“Now don’t get worried, your sister hasn’t turned into a drunkard, she’s just all shaken up and tired and dirty! (p. 12)”

In this scene, Blanche took a drink before Stella had even met up with Blanche, and then two more during the above conversation. In this direct quote, Blanche is not only reassuring her sister, but ultimately also herself. By denying that she is a drunkard, she is preserving her self-perception of antebellum class and dignity, seeing as those of the upper class usually did not drink three casual glasses of whiskey in one sitting. One could argue that the embarrassment and self-doubt in this scene is reflective of how one’s illusion protects not only their self-perception, but also their pride as well. Pride plays a major part in what we wish and perceive ourselves to be. Denying your shortcomings is a way of shaping your ideal self, and by extension, the illusion of yourself. In scene three, after buying a Chinese paper lantern, Blanche states:

Throughout the play, the symbol of light and shadows are presented; light being reality, and shadow being illusion. When Blanche states that she cannot “stand a naked light bulb…” this is inarguably a direct reference to Blanche’s fear of reality, and the efforts that  she goes to in order to preserve her illusion. The light (reality) illuminates everything that she does not want to see, and therefore she covers it with a paper lantern. In reference to “vulgar action” and “rude remarks”, Blanche is relating her fear of hatred to her fear of Stanley—a character regarded as animalistic and brutish. Stanley sees through her precarious illusion; he is the epitome of the reality that she does not want to face. Initially, Blanche does everything in her power to prevent Stanley from peeling back her layers; to prevent her illusion from being tainted by the harsh reality that threatens to overtake her self-image. It takes a lot of gumption to counteract the will of reality, even when your illusion is protecting something that you once had. As in Blanche’s case, she is trying to protect her previous self-image by means of acting like it had never gone away—thus, her illusion. When trying to preserve one’s self-image, one will create an illusion in order to counteract the direct harshness of reality. Regardless, reality is a strong force to be reckoned with.

However hard one may try to preserve their illusion, eventually reality starts to seep in, and taints the idyllic self-image the illusion was trying to retain. In many ways, Stanley and Blanche Dubois foil each other; Blanche tries desperately to preserve her illusion (and eventually fails in doing so), and Stanley tries vehemently to expose Blanche’s illusion (and eventually succeeds in doing so). As the two most poignant characters in Tennessee Williams’ play, they play rounds of mind games—Blanche’s illusion vs. Stanley’s reality. A major event in this back-and-forth game of deception is in Scene 5, wherein Stanley accuses her of being at a promiscuous hotel called “The Flamingo”:

“…he [Shaw] met you in Laurel, but I figure he must have got you mixed up with some other party because this other party is someone he met at a hotel called the Flamingo. (5.28-9)”

This scene shows Stanley’s utter determination to expose Blanche for who she truly is, and to “protect” his friend Mitch from Blanche’s false realities. He knows that there is much more to Blanche than she lets on, and he sees through her act. Stanley, as a very masculine and domineering character, wants Blanche out of the Kowalski household, and would go so far as to inquire about her to others he meets. Blanche, on the other hand, is an animal trapped in a predator’s ambush. From this point on, the patience and carefully constructed roundabout truths start to unravel; Stanley has forced her to admit to her reality, and her illusion begins to fail. Up until this point, she was able to keep her self-image clean and (relatively) pure. But, once confronted with reality, she is not able to retain her illusion of who she wants to be. After all, Blanche no longer has the supreme reality of Belle Reve and her past life. The retort between Stanley and Blanche comes to a head when Stanley gives Blanche a bus ticket to Laurel for her birthday. Blanche’s birthday, on its own, is a symbol of her aging beauty, and how she is closer to losing her dream of Belle Reve and upper class life. So when Stanley gives her a ticket to Laurel (not her old home), it causes her to panic. Blanche is officially worried that the illusion that she relied on so much had begun to fail, even with regards to her own sister. She is not able to face this reality, so she hides from Stanley in the bathroom. Reality had forced her to want to hide away from it; reality is the reaper of illusion and the person she desires to be again. From this point on, we see Blanche slowly start to disintegrate into a shell of a woman, with no prided self-image to be seen, and she finally loses her grip on any semblance of reality altogether.

Finally, once you lose your grip on an illusion you had crafted so intricately, reality becomes a predator; you do not have your illusion, but you do not have reality either. Therefore, one is left only with their sanity, after reality has snatched your illusion away. Blanche eventually loses this too. In one of the culminating scenes, Stanley corners Blanche alone in her apartment, and it is heavily implied that he rapes her.

Stanley says this as if he had planned this action from the beginning. It is inarguable that this line solidifies Stanley as the predator and Blanche as the prey. By this point, Stanley has discovered Blanche’s illusions and has started to wear them down. The rape of Blanche is the one final push of reality that tips her into insanity; the realism of having lost Belle Reve, and having been mentally worn down and physically abused, forces her to succumb to insanity in order to protect herself from reality because she no longer has her illusion to fall back to. Williams, through this progression into insanity, demonstrates the intense lengths humanity is willing to go to in order to protect oneself from a reality that is much too hard to face. In the loss of illusion, you have the loss of your personal identity; you do not know how to view yourself without the buffer of the illusion in place. After Blanche is raped by Stanley, we see the next scene in which Blanche is taken away by the mental hospital staff, and Stella states:

Here, it is exemplified that Blanche’s illusion is truly and finally killed off. Her own sister, in the beginning, likely would have sided with Blanche in the telling of the “story” of the rape. However, now that Blanche’s illusion has become completely unraveled, Stella goes back to the only thing she has: Stanley. Throughout this scene we see Blanche in the aftermath of the killing of her illusion; Stanley has won their deceptive game, and Blanche has no illusion and no sense of self. She spouts gibberish pertaining to her old life and Belle Reve—a college sweetheart that may or may not have existed. This demonstrates how Blanche, in insanity, goes to the only place she knows is still pure and innocent—both these things she tried to achieve but failed. Reality always wins; illusion is temporary, and self-perception is frail. In trying to fix the disparity between her reality and her illusion, she lost her self-perception, and therefore her sanity.

Self-perception is forever intertwined with what we, as humans, want to become in life. When we lose what aspirations we did have, illusions are the glue that holds our sanity together. However, when we lose the illusion, there is nothing left but our sanity; sometimes, that too, gets caught in the crossfire.  Through the character of Blanche, Tennessee Williams demonstrates the idea that in order to keep one’s optimal self-perception, one will try to retain an illusion, especially when seeking to resolve the conflict between illusion and reality. Desirable self-perception is humanity’s fatal flaw: we cannot survive without it, but it cripples us under the weight of reality.