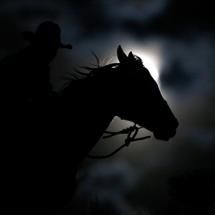 How convenient it can be to lie, how painfully simple to cover up how you’re hurting inside, and how isolated one can become from hiding behind a deceitful smile.

Shallow Creek was an idea just as shallow as its name implies; the two perfectly matched racehorses weren’t as up for competing with the demands of reality as they were once thought to be; and successful life that Chris seeks is perhaps as far away from him as his mind is from accepting his life’s circumstances.

In Marget Laurence’s short story, “Horses of the Night’, I feel as though she truly explores what it means to be unsatisfied and unfulfiled with your life, in addition to being depressed underneath a veil of a false first impression through the character of Chris.

At the beginning of the story, it is evident that Vanessa is insecure and unimpressed by the fact that with her youth brings an aspect of patronization from those older than her, even if they are older only by a few years. With the arrival of Chris, she is reluctant to accept the fact that she will have to behave and be respectful and maintain a certain level of compassion towards this guy who she presumed would practically ignore her. She was surprised and initially resistant to Chris’ suspiciously inclusive nature towards her, as her typical experience with interacting with those who were older than she was, included being ignored and brushed aside with a label: “annoying” and “too young to understand”.

Chris was different. Around the adults he had a subtle dismissiveness, and a passive/indifferent aura. Around Vanessa, he seemed comfortable and more open, he joked around and laughed. I think this speaks to his desire to go back to his childhood innocence where he did not have to concern himself with being successful, or attaining a proper education that will one day get him to a career that will gain the approval of society. I feel that this is why Vanessa and Chris develop such a strong bond; Vanessa is innocent and still young, she does not yet have to concern herself with the standards and demands of society and the struggle to survive during the Great Depression. Chris seeks this, and can only live it through Vanessa.

His insecurities about growing up on a farm with a “fair-sized” house to fit his large family and numerous visiting relatives, with two plough horses instead of the desired race horse duo left him feeling unfulfilled and unsatisfied. Chris had something in him that was larger than who he was given the circumstance, and larger than what he could accomplish on his family’s farm. Depression develops and evolves around the idea that he will never attain the success and approval from others that he needs in order to feel accepted, and he will never fulfill the hunger within him that he is unable to feed given the circumstances he was born into and raised into.

It’s easy enough for him to lie, to cover up his hurt with his gentle nature and deceitful smile to Vanessa; she is still young, not able to identify or stick a label on the mysterious nature of Chris’ depression and desire to be a part of something bigger than himself. He’s hiding, hiding from his unfulfilled and unsuccessful nature of his own self, who failed to create his illusion and turn it into his reality. The possibilties and how unreachable and seemingly unattainable they seem given the time period and circumstances drive the hopeless attempts to achieve anything to fuel the fire of the desire to be a part of something bigger, feeding the depression.

How convenient it can be to lie, how painfully simple to cover up how you’re hurting inside, and how isolated one can become from hiding behind a deceitful smile; and just like that you are a horse in the dark of night, trying to find your way, with a hopeless cause.