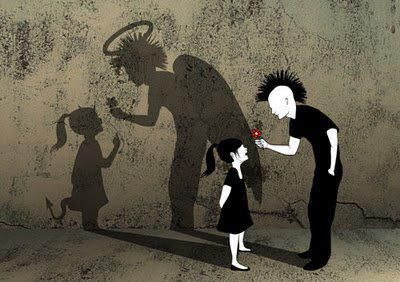 There are two different types of “Monsters” that individuals may have the displeasure of coming in contact with. The first type of monster, would be the Monster in countenance, the creature judged to be a monster based on its appearance. These are the type of creatures spoken only in stories, fantasies from perhaps another world; yet, the question arises, is it truly fair and just to categorize these creations as “monster”? Most often, our fears of such creatures is based off the physical appearance of these creatures, without so much as a shred of evidence that proves that these creatures are, in fact, truly as horrendous as our minds make them out to be. Perhaps the type of creature that may truly be categorized as a “monster” would be a creation that is a monster, not in physical appearance, but rather in their heart, at the very essence of their character. They may be sadistic, or they may be unnecessarily cruel. They may be devoid of any redeeming qualities. Despite having these dreaded qualities internally, these type of “monsters” can often look completely normal, just like everybody else. Sometimes, when people are unaware of the way that these individuals are on the inside, the people around these individuals do not treat them as the beast that the individual is on the inside; rather, they treat them based on how they are able to perceive the physical appearance of the individual. For the same people, if there were to be some sort of horrendous, ugly creature that came within their vicinity, these people would surely start screaming and run, without so much as thinking of how the perceived “monster” may be on the inside.

I feel that an extremely important word in Mary Shelly’s Frankenstein would be the word countenance, with a connotation of physical appearance. The Monster is an abhorred being, inspiring fear and hate within other living creatures simply because of his outer appearance. Even the most loving and secluded human beings, such as the cottagers, regard the monster with hate and fear, despite not knowing his amiable demeanor. The cottagers, as well as humans, in the novel Frankenstein perceive The Monster as a hideous creature, and as such, detest him. Even Victor Frankenstein, the creator of The Monster, hates it simply because of the way that The Monster looks. Frankenstein runs away from his creation soon after it is created, refusing to associate himself with The Monster or show even the slightest empathy towards it. In doing so, I believe that Victor Frankenstein himself is becoming the true “monster”, the type that is a “monster” in their heart. Victor is still regarded with empathy and love from his family, as well as from others, the only time that he even experiences hate from others is when he is framed for the murder of his friend, Henry Clerval. It is simply a matter of countenance, between The Monster and Victor Frankenstein. As Frankenstein had deserted his own creation after bringing it into the world, subjecting his creature to the horrors of humanity, all just to keep himself safe from the creature’s dreaded appearance. Frankenstein and his creature can be said to be opposites, in countenance, and in character, yet both of them each describe themselves using the phrase “miserable-wretch”, showing the parallel between their lives, as both can be considered to be a type of “monster”.

An interesting topic of discussion for me, as of this point, would be the denotation of the word, “monster”. The definitions of the word, “monster”, as denoted by the Merriam-Webster dictionary, is: An imaginary creature that is typically large, ugly, and frightening; an inhumanly cruel or wicked person. The first definition can be a representation of The Monster in Frankenstein, and the second definition can easily define Victor Frankenstein, as can be witnessed by his actions regarding his creation. But the question remains: What, in reality, is an actual monster? Unfortunately, for myself, I am unable to define it. Based on my speculations, I believe that the reason that I’m unable to do so is because of the fact that the term, “monster”, is a word, of which its connotation is solely dependent on the interpretation of the user. Perhaps Mary Shelly had a different interpretation of the term, “monster”, and only meant to ironically dub The Monster as what humanity perceives it to be. Perhaps, in reality, Mary Shelly wished to convey how humans were the actual monsters, in their inability to understand The Monster. The villagers were simply in fear of The Monster’s abnormal physical composition, without so much as regarding as to whether their perceived “monster” may as well be a beast at heart.

A lesson that can be learned from reading Frankenstein, would be to avoid judging a book by it’s cover. The Monster, on the outside, was hideous; however, internally, The Monster had quite the kind and loving character, and all he truly wanted was just the slightest empathy from another living being. Often, individuals in the world can develop mistaken prejudices about something or someone based on it’s external appearance, and I’m sad to say that I make this same mistake in my life. I feel that it’s become an innate aspect of individuals to judge things by how we see them, as we experience when we are young; however, there are people in the world who are able to overcome these prejudices, and I’m glad to say that I know so many of these individuals personally! Based on the examples of those individuals around me, I now attempt to try and understand a situation, before I may try to judge it. And I think it works out perfectly for me. Giving people a chance, regardless of how they may seem, has proven, in my life, to be the greatest gift that you may be able to give to a stranger!